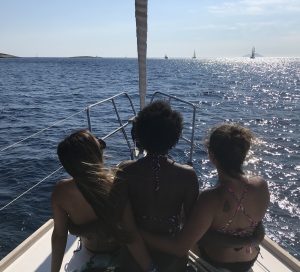 Welcome back, once again! This is the last part of my amazing adventure. I’ve told you about Ultra Europe, the Hvar beach party and after party, and the first few days of sailing with The Yacht Week (TYW). Part three picks up at the last leg of this ocean vacation, beginning with the next party. Yes, I said it – another party.

Day five begins with our porting in Vis late afternoon. The itinerary for the evening was dinner and then a themed Tropical Retro party. Our hostess Lindsey and Skipper Ante made dinner reservations and organized transport around the island. Our yacht crew decided to travel as a group to have a taste of authentic Dalmatian food. We drove up through the hillside and could see the beautiful port below with the sun setting behind it. The narrow winding road keeps taking us up, up, and away. We finally arrived at a remote location where a lone restaurant was found, Konoba Dol.

We were seated at a large family style table. First, the starters, a meat and cheese platter that was devoured in seconds. Next, the salads and cold sides and then the main dish. Lamb chops and octopus; not octopus pieces but the entire octopus, all eight legs and the head. It was the best-grilled octopus that I’ve ever eaten. Everything they cook was seasoned well and slowly cooked making the meat tender. We celebrated our yacht bond becoming closer and the World Cup. Honestly, the guys enjoyed the futbol game while we chatted over the two bottles of wine that came with dinner. The shuttle returned to take us to a beachside venue where the Tropical Retro party went down.

At this particular TYW hosted party, the beats were switched up a little. They changed the music from the EDM we had been hearing all week to some hip-hop and reggae. I was in a state of fresh vitality. Just having a little change in music during the week brought a different life into the air, and I’d say the crowd agreed.

Let’s just say this party got a little wild for me, so we are going to fast forward to the end. After many rounds of liquid courage, I ended up losing my entire crew who all made it back to the boat successfully. Apparently, I told them I was fine and kept partying. I, on the other hand, should have tapped out before missing the last water taxi and ending the night on another boat who had to adopt me for a day and take me to the next island. That was the super cool part about The Yacht Week; it became a community who looked out for each other. I met back up with my yacht family, and at once, we docked on the other side of the island Vis.

Now that I was back with my yacht family, we all rented scooters to explore the island. Again, we drove up the winding roads to the top of the mountain, except this time whizzing away on two wheels. We were supposed to find a very popular Stiniva Beach, but my directionally challenged friends instead found this remote private beach. For most of the morning, we were the only eight souls who knew of this location. Later in the day, the locals began to arrive. Above the beach, atop a hill, there was a cute restaurant. The seating was located in the owner’s vintage style backyard. Coverage from the sun was provided by his grapevine covered pergola. It was literally a picture perfect spot. 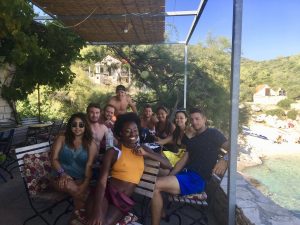 Not only were we directionally challenged, but we were also poor at timekeeping. Finishing with the scooter ride left us only an hour for eight people to get dressed and be at the shuttle on time for dinner at Fort George and the Riviera Chic Party that followed. The theme was all white or nautical colors. By some miracle, we were all dressed in time. If you follow my social media you’d know, I’m NEVER on time.

We were off and running to the Fort George dinner to catch the sunset just in time! The bright orange sky painted with purple and red was perfect. After an impromptu photoshoot against the blazing sky, we sat down to eat. Everyone dressed to the nines, and we toasted to a surprisingly great week of laughter, fun, and new friendships. 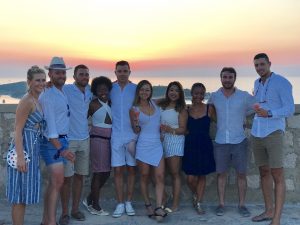 As the sun set, we were reminiscing about each insane moment while dining on fall off the bone lamb and fresh vegetables. As soon as dinner ended, the party began. It was as if the night blended and suddenly we were at a table with bottle service with the music blasting. The party was amazing. Everyone looked amazing. Having a party atop a rooftop of an ancient fort was mindblowing.

The party at Fort George was too much fun. So much so, that my yacht did not wake up early to participate in the Regatta. Our hostess said she attempted to wake us but was unsuccessful. I mean it was a long night. The idea of the Regatta was to have a themed costume with your yacht members as the yachts raced back to Split. I was told a boat full of cowboys from Texas had won… Well, we may have missed the regatta, but we never missed breakfast, especially since Lindsey became accustomed to serving breakfast at noon. Again, our hostess was the best. I not only woke to hot eggs and bacon, but I also learned we had ONE more party to attend! What!? I have never partied this many days in a row in my life, but I guess I was ready.

The closing party occurred in Split at the Vanilla Club located next to the Poljud Stadium. Up until that point, all of The Yacht Week parties were just the 40 boats from the Ultra route. The closing party, however, included the crew members from both the Ultra and the Original Croatia routes. That was pretty cool, it gave you one more chance to mingle with those you’ve connected with throughout the week or to meet new people from the other route. The party marked the send-off celebration with a fireworks show, gogo dancers, and house music. The main dance floor was outside next to the pool. People danced in front of a LED-lit stage. Inside, the club offered a cool air-conditioned place to escape the heat of the night.

My crew rented an Air BnB only 10 minutes away, so, after the party, we had a place to crash. That party may have marked the last night of The Yacht Week, but we just couldn’t get enough of each other. The crew spent three more days together in Split exploring the town and enjoying the vibes that the World Cup brought to the city. Unfortunately, Croatia did not win, but the excitement remained. 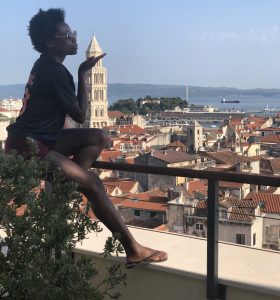 Well, that’s all I have. I wanted this story to inspire you to try something as enthralling as this trip was for me. Seven straight days of partying gave me a lot to talk about. I hope you enjoyed these tales of my trip to Croatia and The Yacht Week.

Did you miss part one or two? Where have you been?? No worries Click for Part 1 or Part 2

Oh, and make sure to subscribe for your free trial of EDM World Magazine or visit us on Instagram @FeFeGreene or @EDMWorldMag