Do you want to know more about EDM World Magazine? You’ve come to the right place. Welcome to the heart of Electronic Dance Music.

We are the number one electronic dance music magazine app in the world with over 27,000 app downloads over the past five years. We are located in the Apple App Store for our iOS users and the Google Play Store for our Android users.

To get to know us better please watch our “Inside EDM World Magazine” video and check out our story, five core values, promise, mission, and brand positioning statement to you below.

Our mission is to provide content that connects the electronic dance music community through information, education, entertainment, and inspiration.

We promise to bring together all aspects of edm and rave culture into one place. EDM World Mag is by the fans, for the fans and not only are there different genres and artists, but different perspectives as well.

We promise to provide a platform where every opinion is heard and to bring those ideas together in a way that provides you an interactive source for all things edm.

1. Passion — Our magazine team is passionate about electronic dance music and the industry. We love the ability it provides us to support the scene in a whole new way.

2. Fun — Our magazine seeks to capture the essence of the electronic dance music scene which is fun, cool, and lively. We are energized by working with each other and emulate the work hard play hard vibe.

3. Diversity —Our magazine covers a wide variety of electronic dance music artists, genres, and topics that are innovative and dynamic. We touch on all areas of the lifestyle so there is always something for everyone by not just focusing on what’s popular in the mainstream.

5. Inspiration — Our magazine inspires others in the electronic dance music community by featuring content and stories on how EDM saves, changes, and transforms peoples lives. We believe music is the universal language of the world and has the power to uplift and cause a ripple effect for many generations to come.

For electronic dance music community members who desire to be connected to the community or stay up to date on the rapidly evolving scene, our app provides a central location featuring all types of EDM related content.

Unlike other EDM apps, websites, blogs, and magazines, our magazine is committed to featuring interactive content created from the fans and for the fans that appeals to everyone in the community and their interests.

The year was 2002, and our founder Denice Dal Braccio was sitting in her room in New Jersey looking for an outlet to release the pain she felt after losing her mom to non-smokers lung cancer. She tried watching tv, but that didn’t help. She tried going shopping, but that didn’t work either. Frustrated, she went home just as broken and depressed as before.

Laying in bed Denice put on her headphones and started listening to her favorite CD singing the lyrics, connecting to the words, melodies, and sounds which seemed to now have a different and deeper effect on her. She really felt and connected with the music and it helped ease the pain she was suffering. From that day on she knew she had found the transformational piece in her life. Music could save, change, and transform lives and she wanted to help others who were going through tough times in their lives. She searched for the easiest way to spread the message of music. By 2013 she knew anything was possible so she decided to quit her day job and start a worldwide magazine …and EDM World Magazine was born!

The original idea was to create the best source for everything in the world of electronic dance music where people could easily turn towards to escape their daily pains and put their mind at ease with music. Over the past year, the brand and aspirations have grown. Since our launch in 2013, we’ve become the number one digital magazine app in the world of the electronic dance music industry which provides the best platform for community members to connect, grow, and strengthen our cultural movement. We seek to spread the core values of our community known as PLUR: Peace, Love, Unity, and Respect.

Love electronic dance music and want to join us?

Click here to check out our job openings and apply.

Get free music downloads every Friday of only the best in electronic dance music we find throughout the week. You in? Click the “Join Now” button.

Get step by step instructions on how to get this issue free! Click “Get The App”button below to get started. See you inside. 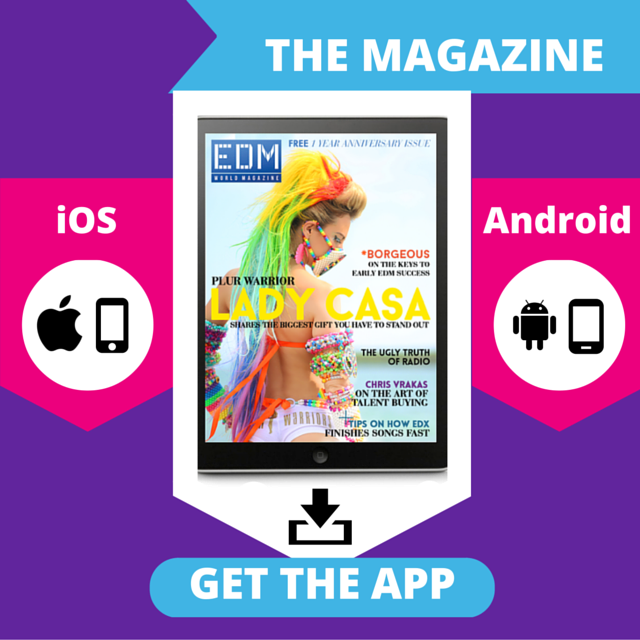