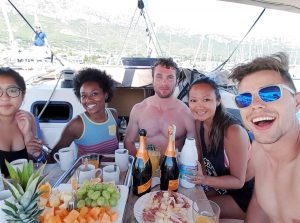 Welcome back! Last week, I was telling you about the first leg of my trip. I booked a week-long adventure through The Yacht Week (TYW), Ultra Croatia route. Our package included Saturday and Sunday of the Ultra Europe festival. We personally extended our vacation by adding Friday of the festival. Essentially, ULTRA was our pregame because what was to come in the following days I could not imagine. Now that the warm-up was behind us, it was time to set sail!

Right after the festival, we were instructed to be aboard our yacht promptly at 9 am. Our first stop involved us anchoring in the middle of a bay where we had breakfast. Breakfast was served by our wonderful hostess, Lindsey (see my pic!). The views of the bay were breathtaking, and after the fresh platter was served, we all jumped into the natural swimming pool.

A crisp cool feeling provided a clear-minded rush in comparison to the morning heat which was just warming up. Floating buoyant in the salt water, two passersby paddling along on twin popsicle floats,  joined our little pow wow. So friendly was the interaction that we made our first new friends of the week. Both were travel nurses who were currently stationed in Hawaii. Fifty feet away, their yacht was parked, and we waved to greet the remaining passengers that stayed onboard. 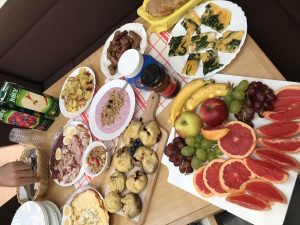 We continued our journey into the next bay, Stari Grad, and this is where the magic happened. As each yacht approached the final destination, you’d notice skippers jumping ship. I turned and noticed my Skipper Ante, and I had no idea what was going on. Yacht after yacht and skipper after skipper, with static emanating from the walkie-talkies, the organized chaos was exemplary. Within 15 minutes, 40 yachts were linked together forming two parallel lines. The arranged yachts were the stage for the first of two floating raft parties.

Bottles began popping from neighboring yachts. Our pre-made Sangria became a huge hit as newcomers came to visit us. The leader of the migrants called themselves the welcome crew. She grabbed my hands and pulled me along the train. Before I knew it, I had visited at least 15 boats each offering a different but welcoming vibe. 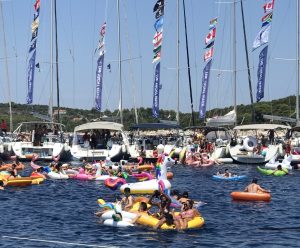 I was at the point of no return and too far to turn back. Looking over my shoulder, I could see my boat in the distance. I then realized that music had begun blasting from stereo speakers, people were now also hoping from yacht to yacht mingling, and the party seemed to have started spontaneously.

A stampede of floaties had taken over the blue water. Unicorns, swans, dragons, an 8-slice pizza, and even a winking faced emoji were all conjugating toward the center with their owners atop. If you did not have a floatie, don’t fret; a new friend will pull you aboard their float. I was pulled onto the pizza pie and again made new friends.

Later in the week, we would experience a second floating raft party (see my pic above!), except that party took on a circle formation. That party included the Buzz Boat, a floating taxi DJ powered by Void, which kept the good vibes flowing. The insane party vibes were captured from a different perspective by drones that flew above the madness. Honestly, the floating raft parties were two of the highlights of the week and even that was a difficult decision to make… 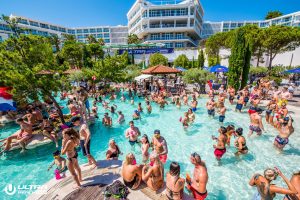 Yes, the festival was over, but our Ultra experience was not. Visitors describe Hvar as the St. Tropez of Croatia. You enter into the quaint little town’s center navigated by a winding brick road. The shops, boutiques, restaurants, and bars make the town feel alive. As you travel toward the sound of music, you can spot the Amfora Grand Beach Resort at the top of the hill.

The Yacht Week package included general entry into the pool party. One flash of your wristband and you were in. You could pre-purchase a table with very affordable bottle service. People were jumping in and out of the pool and splashing to the heavy beats dropped. Looking high above, residents of the hotel were partying from their balconies. World class DJs such as San Holo, kept the party going well after the sun had abandoned the day. 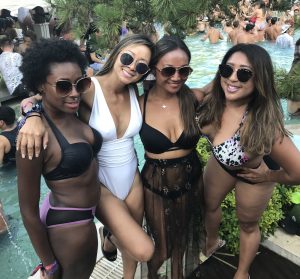 After the party, many headed over to the official RESISTANCE after party. That party took place at Carpe Diem Beach Club in the Pakleni Islands, which is a short Uber taxi ride. That’s right, Uber, an official festival sponsor, was providing affordable uber rides on the water. If you had VIP beach party entry, it included access to the after party. Our TYW admission was general admission, but the additional cost was very affordable.

There is so much more I can tell you, and I will… Want to know what happened next on The Yacht Week experience of a lifetime? Make sure to subscribe to get your free trial of EDM World Magazine and read my full event preview of TYW.

Click for Part 3 of my adventure to find out what happens during the rest of The Yacht Week! Did you miss the first leg of the trip… Click to read Part 1 of the journey.