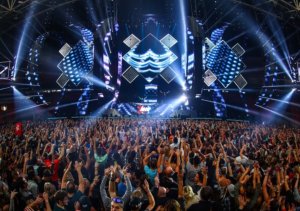 On Saturday, October 21, 2017, the Amsterdam ArenA was home to over 40,000 people. The fifth annual Amsterdam Music Festival (AMF) had taken place. Attendees from across the world—100 different countries—all converged for this one-day celebration of EDM artistry.

EDM’s hottest DJs delivered spectacular performances throughout the night, with sets by David Guetta, Dimitri Vegas & Like Mike and a special never before seen B2B set from Armin van Buuren and Hardwell.

Those with their ticket to Holland’s beautiful ArenA venue were privy to witness the Netherlands’s own Martin Garrix be crowned as DJ Mag’s Top 100 DJs winner for the second year in a row. DJ Mag has been crowning the top DJ yearly based on patron’s votes, making the contest essentially a people’s choice award.

Dimitri Vegas & Like Mike finished in 2nd place and as the highest ranked DJ group. Armin van Buuren topped out at number three but was awarded as the top trance DJ. Female entries Nervo, Miss K8, and new entries Mariana Bo and Alison Wonderland made the top 100 at positions 42, 58, 84, and 89, respectively.

“Thank you so much to everybody who has supported me from day one. It’s been one crazy rollercoaster ride.” -Martin Garrix

But the DJs weren’t the only ones who stole the show. We all know behind every great DJ is a magically awesome light show. To which AMF did not hold back on. Not only were their LEDs on point, but the sound system and pyrotechnics were also reported as what our EDM dreams are made of.

Are you tryna see what went down Saturday and begin planning for next October?

No problem, go here to view pics of AMF 2017 and visit amf-festival.com for more information!