25 Sep Trillectro Brings Hip Hop & EDM Together on One Stage 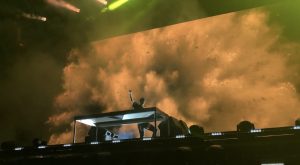 Trillectro comes to the DC, Maryland, and Virginia (DMV) area to bring together two genres that are currently killing the game, hip-hop and EDM! This past Saturday, September 22, 2018, the Merriweather Post Pavillion hosted the annual event. The event had sponsors that are local to the city like Downtown Locker Room (DTLR) and radio station 92Q (92.3). The event even brought out the big guns with Lyft and Tidal. Overall, they were able to pull together a great show with a very diverse crowd partying together as one.

The small one-day fest included three stages. First, there was the 9:32 club, tucked away in an enclosed fixture designed to look like a small wood cabin overlooking the field. It featured a patio positioned with tables which served as a great spot to have drinks and to look out at people. Club mixes, including local native sounds such as Baltimore club music, banged in the background.

The 9:32 club was a great reprieve when the other two stages took very long breaks in between acts. If there was any criticism about the event, it was the poor transitions between each performance. There were at least 15-20 minutes of silence while waiting for them to begin. If you wanted a good spot to hear great music, you first had to endure the silence. Otherwise, you could head over to the 9:32 club which had consistent DJs playing throughout the entire day.

The Hill Stage was dedicated to the up and coming artists in the game. The most anticipated was female rapper Rico Nasty. She brought out one of the largest crowds to the Hill Stage. Her lyrics were fire, and she was so cute with green hair, providing hip-hop flair. She gave so much energy dancing, jumping, and running from side to side to give all her fans love for which they gave it back. She even popped up amongst fans in the floor seating during Sza’s performance. So cool and chill, I turned and noticed her put a finger to lips to politely ask that I don’t blow her cover. I got you gurl.

The main stage sat under the pavilion and was the spot to catch the main acts. The doors opened at 1 pm, but the show really began around 4 pm when the main stage started to heat up with Young Thug.  To follow in order were 2 Chainz, The Internet, Playboi Carti, special guest Carnage, RL Grime, and Sza who closed out the night

Carnage was a good transition from hip-hop to the more EDM artist RL Grime. Carnage prepped the crowd with his bass-heavy beats, flames shooting from the stage, and confetti finale. Then it was time for the real EDM light show. It was crazy to see how they transformed the stage to accommodate RL Grime’s set up. This is when a raver really begins to appreciate the dramatics our DJs place into their presentation. RL Grime came equipped with his own lights and podium. Unfortunately, his massive setup took at least 30 minutes to transition, but to watch his team work was a show in itself.

Once Henry Steinway began playing his genre infused trap style EDM remixes, the crowd was instantly divided into the haves and have-nots. Those familiar with the music were instantly taken away. Those not familiar with Grime’s music looked on in baffled astonishment but could at least still jam because they recognized the familiar hip-hop remixes. I mean, he has been responsible for creating official remixes for Benny Benassi, Chief Keef, Jamie Lidell, and Shlohmo.

You could hear them curiously speaking about the lights. They would turn around and notice the die-hard ravers headbanging away to the bass. Then the flames would shoot off like rockets of a jet engine. The girls holding it down in the front screamed in surprise. The Trillectro scene had become very interesting at this point. It was such a juxtaposition to watch the people comingle. As a personal fan of RL Grime, he definitely put on an excellent starter show for a newbie while keeping his loyalists happy. 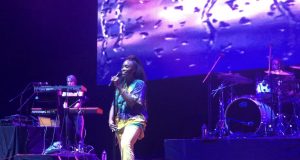 As R.L. Grime finished killing his set, it was time for the most anticipated act of all. The stage began to rotate, as if it sat on a turntable, to reveal a band preparing to tear the stage up. The drums, keyboard, and guitar lay and wait for Solána Imani Rowe, better known by her stage name SZA, to finally grace the stage.

SZA is an American R&B singer born in St. Louis, Missouri. Her music can be described as a neo-soul, alternative R&B, with elements of hip-hop, cloud rap, witch house, and chillwave. She found fame through self-released mixtapes. The first was titled See.SZA.Run, and it was followed by her second mixtape titled S.  When she finally was signed to Top Dawg Entertainment, she released Z, her debut EP. It wasn’t until her self-written debut studio album Ctrl released on June 9, 2017, that her name began to ring everywhere.

SZA finally stepped out into the spotlight and immediately began bellowing out all of our favorites. Well, the show was behind schedule, so she made sure to give us all the time she could. There was no time for small talk, just her beautiful soulful voice.

She donned bright baggy clothes reminiscent of the 90s and had natural locks flowing all the way down her backside. With her energy on 10, she put on a hell of a show, winding and grinding at key points of the performance pulling the audience in. Then she surprised us not once but twice by bringing some DC legends Goldlink and Wale! The crowd roared in appreciation, and they both showed mad love and respect to the beautiful songstress.

Trillectro was a good festival, a great value, and they did a good job of bringing the different musical backgrounds together. One suggestion for future events would be to improve the transition between acts. A second suggestion is to make the performance schedule more readily available. The experience was dampened by the feeling of being lost. Not knowing who was playing or when made planning the stage hopping very difficult. Organizers did not have the schedule posted on location or via their website. I got my hands on a schedule from another patron. They retrieved it from an ambassador’s Instagram page. Otherwise, if you are looking for a great mix of music and good vibes try Trillectro next year.

No one only likes one genre of music. Do you think a hip-hop festival blended with EDM is a good idea? Place your thoughts in the comment box below. Plus, check out this festival in the future by clicking here.