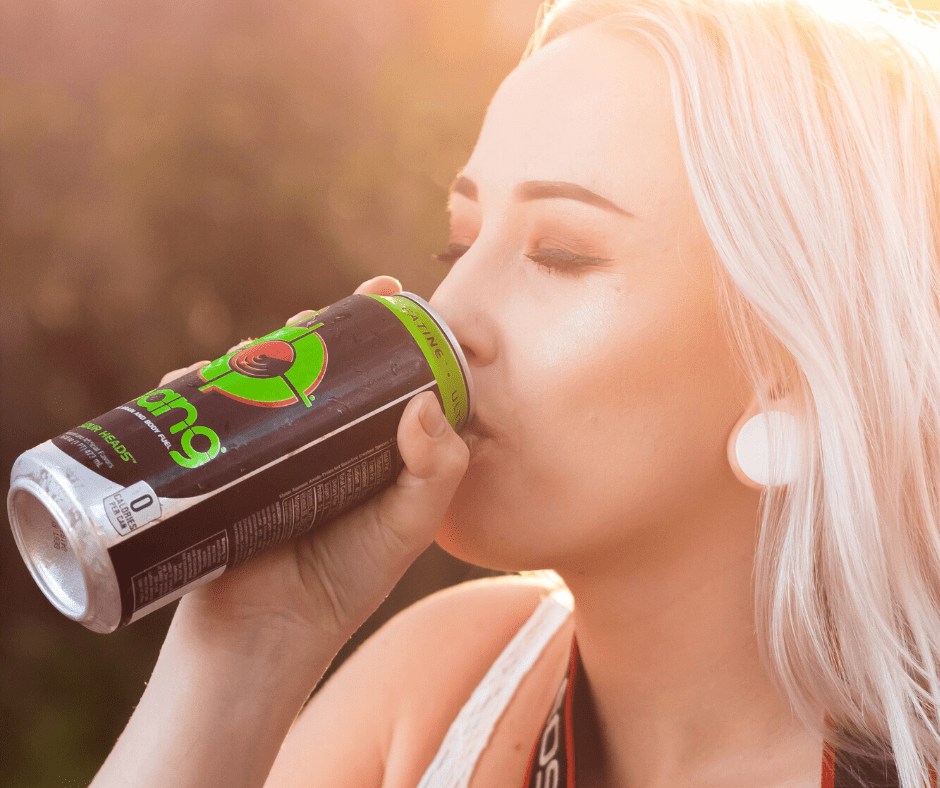 Do you want to know what the top 9 energy drinks are for ravers? Are you the sober driver? Are you burnt out and want a boost before the party tonight? Maybe you just need an edge on all that work you’ve been putting off? If so, you’re probably on your way to buy some energy drinks right now.

Which one should you choose? I too have found myself mesmerized by a wall covered in colorful cans. Uneducated, and feeling intimidated, I grabbed the one with the most exclamation marks. I didn’t even read it. It was caffeine-free! I want you to learn from my mistakes. That is why I made this article, to go beyond the same three energy drinks you read about everywhere.

Instead, this review will give an unbiased opinion on most major brands in the energy drink industry. Most importantly this article groups energy drinks based on their most optimal settings for consumption. I cover the best energy drinks for going to work, those times when you just need a kick in the pants, and weekends when you are looking to turn up!

Each list is ordered from the least to the most amount of stimulants like caffeine and taurine within each can.

Energy Drinks for Going to Work

These are the drinks that typically prelude a productive day. I find these beverages in the hands of everyone ranging from ravers to soccer moms, and CEOs alike. No one will judge you for drinking these daily, however, your doctor might not advise you to consume one more than once per day. 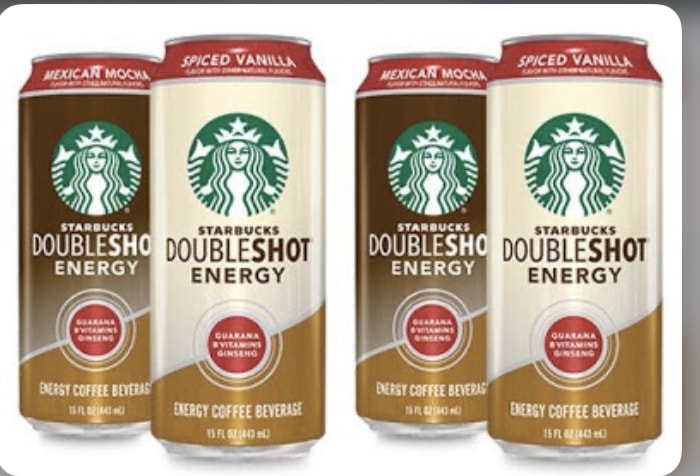 These are for you if you want a caffeine boost but don’t want to look like your heading to the X Games. No one will bat an eye if you crack one of these open on your morning commute. Starbucks is trendy, tasty, and most importantly it will get you going. The double shot comes with 150mg of caffeine, whereas the triple shot packs a powerful 225mg of caffeine.

The major con to this drink is that it only utilizes caffeine as its energy source. Most other brands mix several stimulants for a longer-lasting effect. The double and triple shot does have added B Vitamins for ‘increased energy’. However, most studies concur that your body doesn’t absorb B vitamins through supplements especially not when the supplement has been sitting in a can full of acid.

Another massive negative is the 26 grams of sugar and 200 calories. That’s six teaspoons of sugar! Definitely not the drink for those watching their figure.

Click here to get your own pack of Starbucks Double Shot or Triple Shot on Amazon. 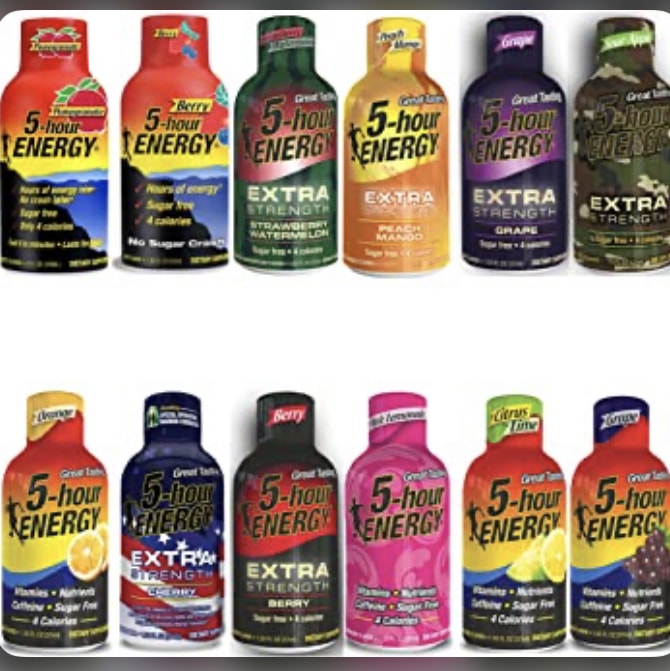 Five-hour Energy is what I like to call three-hour energy and a whole lot of trouble getting to sleep. These guys love to advertise they only have as much caffeine as a cup of coffee. In reality, those little bottles hold 200mg of caffeine as well as a decent dose of taurine which is a common stimulant. I don’t know why they try to hide this fact. I see it as a pro. Other positives include its only four calories and zero grams of sugar per serving.

The downside to this drink is that it’s in the form of a shot. Like all diuretics the faster you consume caffeine the more you feel its effects. It also fades from your system much more quickly. Meaning you’ll either need to drink another bottle or pair Five-hour Energy with another stimulant.

Click here to get your own pack of Five-hour Energy on Amazon. 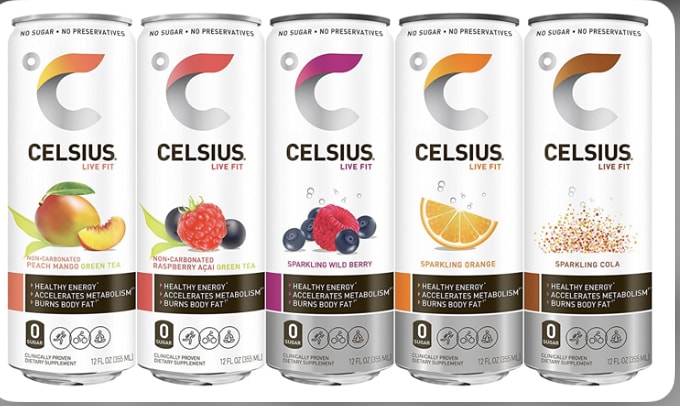 Here we have a product designed for the mythical creature known as a ‘morning person’. It’s most impressive feature is that celsius has been proven to aid in weight loss when paired with diet and exercise. This makes it a top choice for people who like to work out before starting their day. Its 200-300 milligrams of caffeine are derived from multiple sources including tea leaf extracts and the much more common caffeine anhydrous. What this means is, it will keep you feeling peppy all day long.

Unfortunately, the greatest asset is also this product’s biggest drawback. If you’re already underweight, taking weight loss supplements, or have a very specific diet you are already following, this drink might not be a healthy option for you. They’re also a little bit pricey and pretty hard to find. You can pretty much only purchase them online, in a vitamin shop, or at Target. This makes them a preplanned purchase as opposed to a spur of the moment pick me up.

Click here to get your own pack of Celsius Energy Drink on Amazon.

Energy Drinks for a Kick in the Pants

You could get work done on these beverages, but it means you’re probably a college student fighting procrastination. Also, if you drink these daily odds are good your pee glows in the dark. More often than not, these are the drinks you grab when that beach party turns into a club crawl and you can barely keep your eyes open. 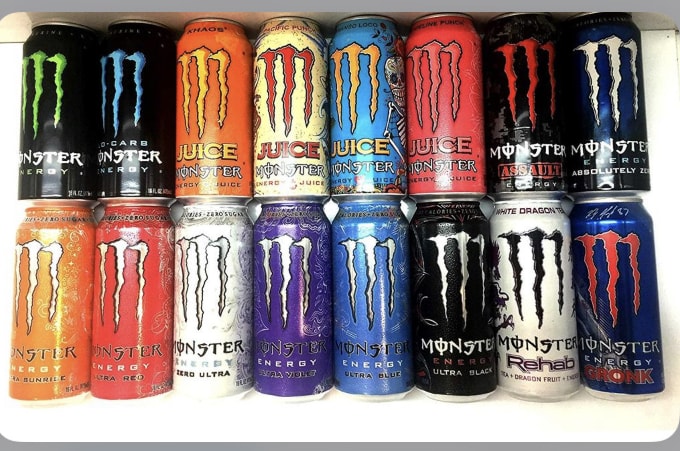 Monsters’ main pro is that it is everywhere. If you were lost in the desert you’d find a stand selling monster before you found someone selling water. It comes in a large variety of flavors and you can always count on it for a kick. Monster is also a big supporter of festivals, concerts, and extreme sports.

Unfortunately, despite its incredible marketing team, Monster comes with a pretty tall list of negatives. For one thing, it holds an average of 27 grams of sugar per can as well as 101 calories. It also only puts up a petty 86mg of caffeine, on average, per can. Basically, you’re drinking really strong iced tea. However, if you only want a small boost of energy and are still looking to go to bed at a reasonable hour, the low caffeine could be seen as a positive.

Click here to get your own pack of Monster Energy Drink on Amazon.

I want to be nice to this drink. I really do. RedBull is one of the first-ever energy drinks on the market. The industry wouldn’t be where it is today without Redbull. They have funny commercials and support all of the most popular extreme sports and music festivals. When you buy red bull you help continue that tradition.

Like Monster, RedBull only holds a measly 111mg of caffeine for an average can. A good amount for getting through a party while still getting some shut-eye. It also has one of the highest sugar contents on the market at 37 grams per can. You are basically drinking liquid candy.

Click here to get your own pack of RedBull on Amazon. 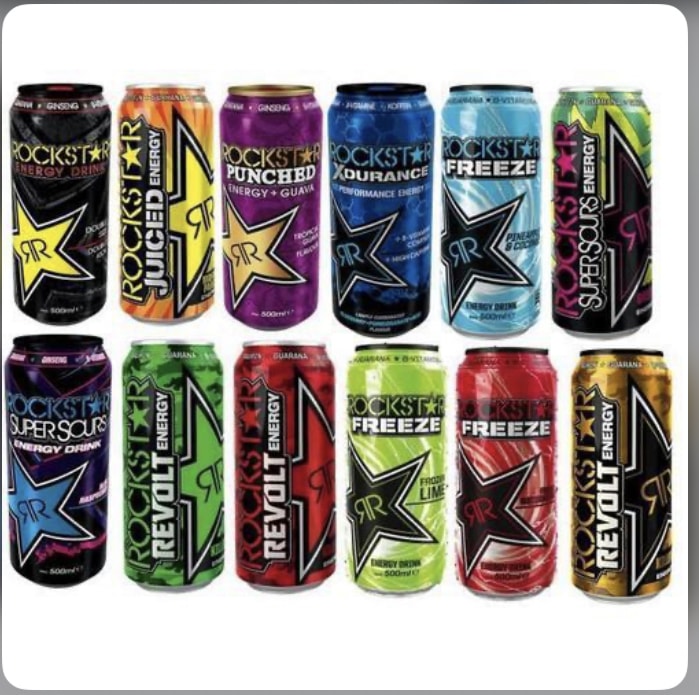 Rockstar is the bronze medalist in the world of energy drinks. They have a great marketing team but at the end of the day, there’s only so much you can do to distinguish yourself in the market. Their biggest pro is that rockstar is a U.S. brand. Supporting them supports the American economy. Another pro is that Rockstar packs 160mgs of caffeine per can, on top of the taurine, ginkgo leaf extract, and other stimulants. You can count on it to keep you going for a while.

The cons are all pretty much health-based. At 31 grams of sugar, rockstar is also liquid candy. Not to mention they use the artificial preservative known as sodium benzoate. It has been known to cause stress, obesity, aggravates allergies, and in extreme cases generates ADHD in regular consumers.

Click here to get your own pack of Rockstar on Amazon.

Energy Drinks to Turn Up

Finally, we have the heavy hitters. The cans full of crazy. I’d like to take this moment to thank all the designated drivers who guzzle these beverages to keep up with their belligerent friends. These brands are for when you’re trying to turn up at a club or festival but you’re not into drinking alcohol and want to stay sober. 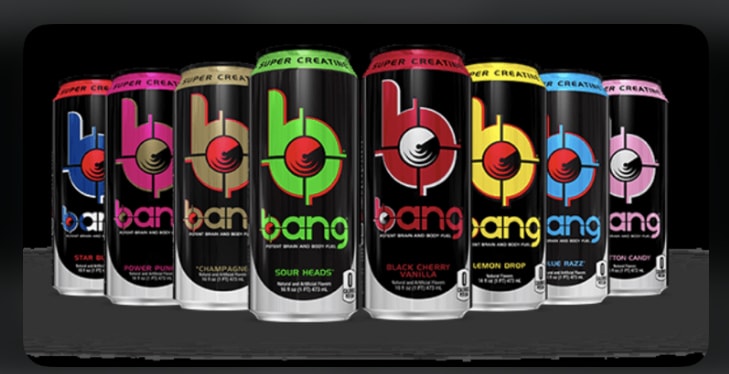 VPX, Aka BANG! (because that’s what these energy drinks hit you with) is a personal favorite of mine even though it’s possibly the least healthy choice on this list. Pros include a wide availability and a large variety of flavors. Bang has 0 grams of sugar and is 0 calories. They also tout the ingredient ‘super creatine’. 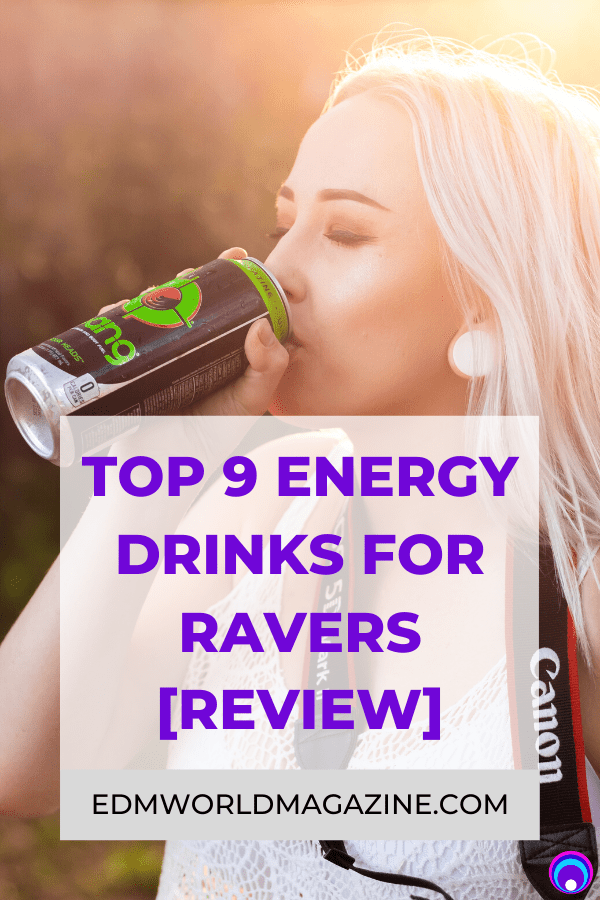 Creatine is a pre-workout supplement meant to elevate blood flow and energy. When you combine creatine with the other stimulants found in a Bang, as well as the whopping 300mg of caffeine, you start to feel like you’re drinking lightning. One can of this and you’ll have no problem dancing until the sun rises.

A huge con is that just like Rockstar, Bang utilizes the artificial preservative sodium benzoate. To reiterate, this preservative has been known to cause stress, obesity, ADHD, and aggravate various allergies when consumed in large quantities. When you factor in the artificial sweeteners as well, it becomes clear that bang isn’t the best choice for regular use.

Click here to get your own pack of VPX Bang Energy on Amazon. 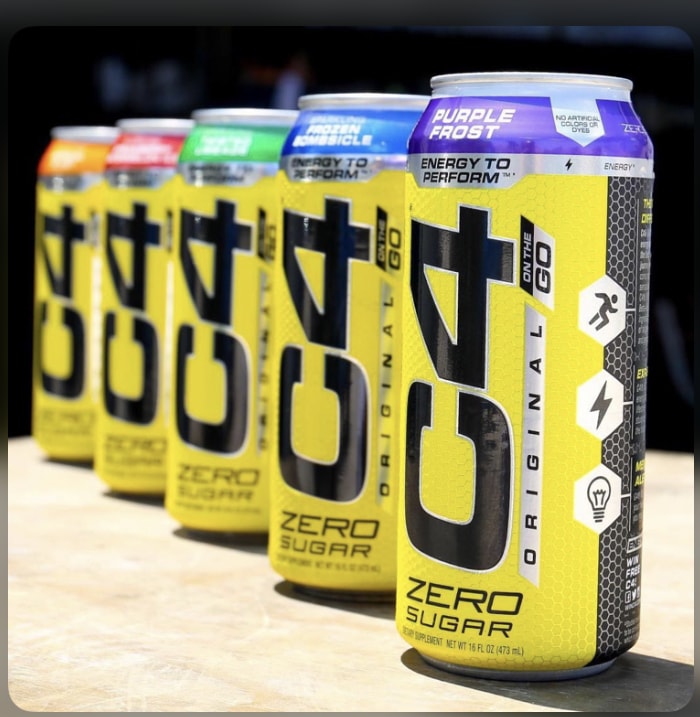 If you’re trying to explode tonight, you have to ‘C’-’4’ yourself what this drink is all about (nailed it). C4 is a brand of pre-workout powder that decided it was going to get into the energy drink game. Sure it comes with 200mg of caffeine, but if you’re drinking this, it’s probably because caffeine just doesn’t cut it anymore.

The biggest pro about C4 is that it uses very unique stimulants in its blend; creatine, beta-alanine, and citrulline malate. If you’ve already built up a tolerance to most energy drinks, this is a huge positive for you. Just make sure you break a sweat on the dance floor or you won’t be sleeping until next week.

The biggest con is its lack of availability. Where can you even find this stuff? It’s not in gas stations or convenience stores. You’ll have to hunt for it online or at vitamin shops. Another major con is the obvious health risks that are associated with ingesting so many stimulants at once. It’s not for the faint of heart, literally.

Click here to get your own pack of C4 on Amazon. 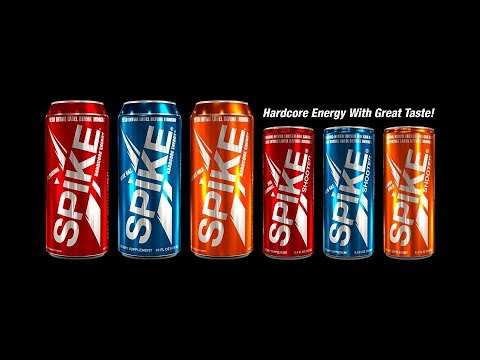 This energy drink doesn’t play games but it’s a great pick if you do! Spike tops our chart with 350mg of caffeine. Not to mention a dose of n-acetyl-l-tyrosine, an amino acid given to people with chronic fatigue and narcolepsy. If you’re a novel energy drink consumer, this might make you feel like an alien is bursting through your chest. Don’t worry, that’s just your heart. One can of Spike will easily keep you wide awake through a three-day festival.

The major drawbacks of Spike include a high acidity level which can leave you with an upset stomach. It also has a high likelihood of increased muscle tension and anxiety. Plus, it’s pretty hard to find. Outside of vitamin shops and good old Amazon, there are only a handful of Walmarts that carry Spike. Believe it or not, there’s not a huge market for people who want to move faster than a hummingbird.

Click here to get your own pack of Spike on Amazon.

There are dozens of more brands of energy drink that could fit into these categories but I picked only the best ones I’ve tried. With anything else, please remember to drink responsibly and in moderation.

What is your favorite energy drink? Swipe up to comment below!