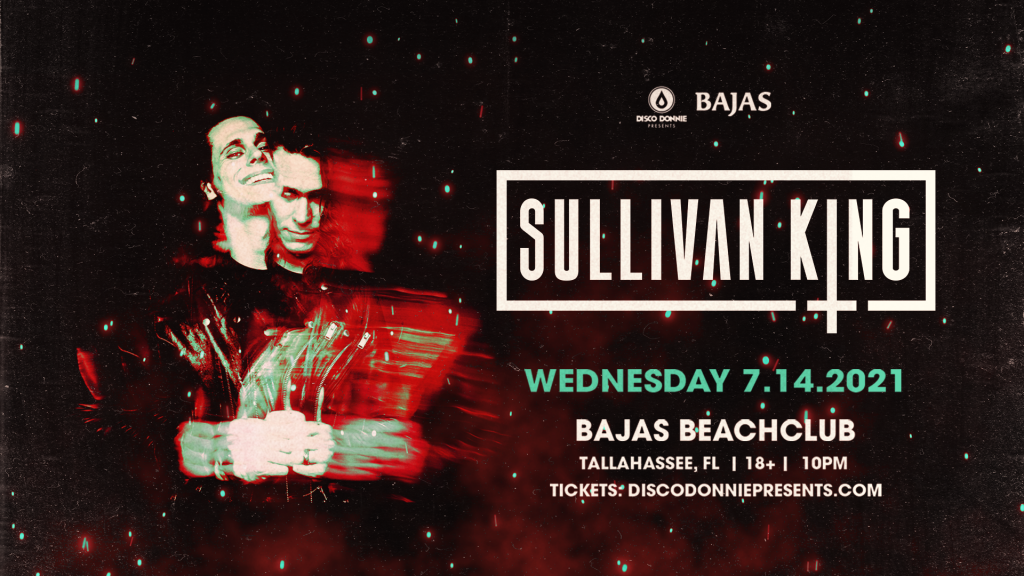 Sullivan King: when heavy metal and riddim collide, more of a fantasy than an event review. Most people think of Wednesday as hump day; a struggle to overcome, being that it’s in the middle of the week. You want to put your head down and grind through it so you can enjoy a relaxing weekend. No one would ever expect it to be the highlight of the week.

This Wednesday was different, however. I forgot about all of my worries, grabbed my friends, and witnessed Sullivan King throw it down to a godly set of dubstep blended with rock and roll. This was the gift that Sullivan King delivered to the ravers of Tallahassee last Wednesday night, which seems ironic considering it was his birthday.

In the hours leading up to the concert, there was an optimistic buzz throughout the city. This was the first hard-EDM artist to play at this music hub in months. I was beyond excited to see Sullivan King live, but to be honest I had no idea what to expect. Just recently, I have started to expand my musical horizons by diving into dubstep and riddim. However, I had a strong feeling that this would be a night to remember.

Noxious and Rino opened up the event, which took place at Bajas Beachclub, a venue that never fails to show its attendees an amazing time. As the crowd steadily grows, the two DJs set the mood for the night by playing some heart-racing dubstep. The moment you walk through the doors, you can see the energy flooding off the stage onto the dancefloor.

Although the crowd was smaller than some of the events Bajas has held in the past, the intensity and solidarity of the collective were infectious.

Following the openers, Evan Cazes, known as Evalution, took the stage. For those of you who have yet to hear of Evalution, it is crucial to know the name. His unique style of resonant mesmerizing bass and raw talent with the electric guitar has earned him over half a million Soundcloud plays. He’s also had around 15,000 monthly Spotify listeners and support from the likes of Adventure Club, Blunts & Blondes, and TVBOO. Additionally, his tracks have been featured on volume three of Excision’s Subsidia label.

Evalution has a residency in many of the Tallahassee nightclubs and is a fan-favorite among the locals along with his fellow students at Florida State University (after graduating this past year). His set on Wednesday did much more than live up to his image. He produced a tidal wave that drowned the crowd in hard-hitting bass and vintage throwbacks. One of his most memorable moments is when he performed his remix of “Go F**k Yourself” by Two Feet. ‘EVALUTION’ flashed like a strobe behind him as every cord hit differently from the previous.

At the peak of his set, he dropped his single “Check2Check” and the crowd was ecstatic. The track has such a rare drop with a chorus that is full of grimy wubs but is melodic as well. The lyrics match up with Evalution’s persona perfectly: “I live by the beat like you live check-to-check.” Evalution has demonstrated that he is truly passionate about his style of music and would not switch it up for a bigger check.

Around 12:40 AM, Evalution’s set came to an end and the venue filled with jittery anticipation for Sullivan King. The rockstar DJ hybrid took the stage and a roar erupted similar to the hellish screams that can be heard in many of his tracks. One of the first tracks he played was his hit single “Loud”. Mixing a progression of ear-shattering bass into the guitar solo that leads to the chorus, Sullivan stared into the souls of his audience as he screamed, “Tally it’s good to be back!”

Sullivan King continued his attack on Bajas, using a variety of firey dubstep balanced with shockwaves of vocals and guitar. The visuals were sporadic but captivating, spinning our brains in circles as we clutched the rails like our lives depended on it. He periodically ran up to the front of the stage to shred guitar directly in the faces of his worshippers. When he played “Fight Through The Pain,” his track with Excision, the building shook on the verge of collapse.

STANDOUT MOMENTS FROM THE NIGHT

About halfway through his set, the music came to an abrupt stop as his friend took the stage. The bottle girls followed behind carrying lit-up birthday signs and illuminated balloons. Sullivan King’s friend held up the cake as we all sang happy birthday to the incredible performer. The artist held up his hands to wave to the crowd while a contagious smile spread across his face. Everyone knew what he was planning on doing with the cake when he grabbed a hold of it and chucked it into the crowd as if it was a grenade. The ravers immediately dove onto the floor and stuffed their faces.

The proficient DJ then got back behind the board, resuming the festivities. Not too much time went by when he ushered the girls to the middle of the dance floor for a mosh pit. This was something I had never seen before and I laughed as my girlfriend disappeared into the chaos. The song transitioned, the mosh pit dispersed, and my body was once again consumed by the overpowering metallic bass. I had lost complete control as I bounced around to the rhythmic vibrations of the bass.

CLOSING OUT WITH A SURPRISE

To finish off his set, the producer blessed us by playing an unreleased track. As we all swayed back and forth to the soft lyrics and gentle buildup, it was clear that this is how a concert should be. Everyone was in the moment, letting every layer of the song encompass them. The song structure reminded me of “Losing You” by Vanic and Aquilo, one of my favorite EDM tracks.

If one thing is to be learned from Wednesday night it is that Sullivan King knows how to put on a show. Raver and Florida State graduate Jesse Lastofsky put it perfectly when he said, “Sullivan King’s versatility is incredible: between his mixing skills, guitar, and vocals.” He is the triple threat that both heavy metal and EDM have long-awaited. Truly, a man who is the epitome of creative genius meets natural-born musician with a side of infatuating stage presence. Click here to see Sullivan King’s upcoming concerts.

Did you attend Sullivan King at Bajas? Comment below and tell us your favorite part of the night!