26 Dec The State Of The Music Business: A Deeper Look At Radio & Streaming Services

Posted at 12:33h in Magazine by Denice 0 Comments
0 Likes
Share 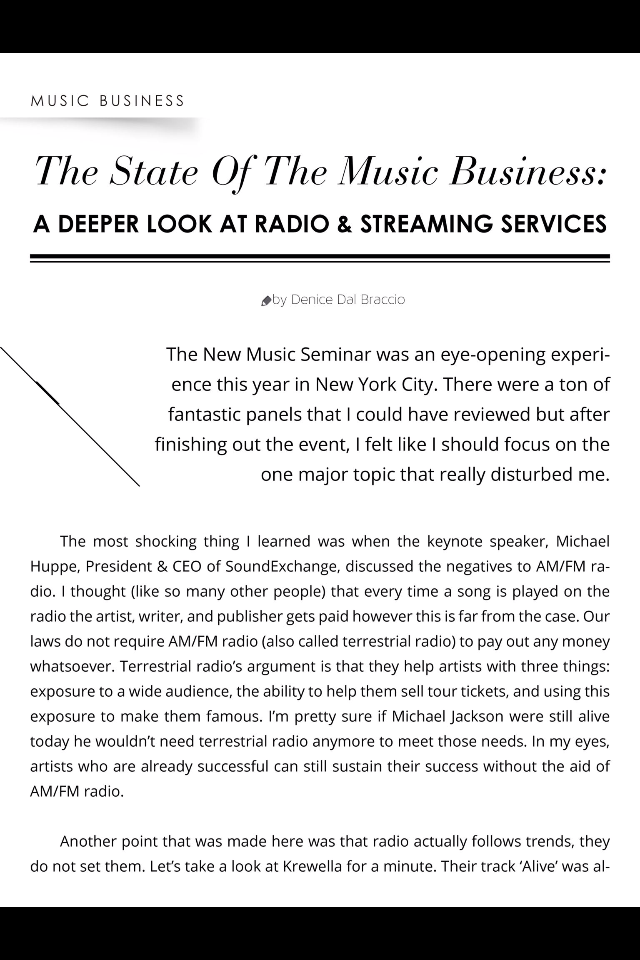 The State Of The Music Business: A Deeper Look At Radio & Streaming Services
By: Denice Dal Braccio

The New Music Seminar was an eye-opening experience this year in New York City. There were a ton of fantastic panels that I could have reviewed but after finishing out the event, I felt like I should focus on the one major topic that really disturbed me.

The most shocking thing I learned was when the keynote speaker, Michael Huppe, President & CEO of SoundExchange, discussed the negatives to AM/FM radio. I thought (like so many other people) that every time a song is played on the radio the artist, writer, and publisher gets paid however this is far from the case. Our laws do not require AM/FM radio (also called terrestrial radio) to pay out any money whatsoever. Terrestrial radio’s argument is that they help artists with three things: exposure to a wide audience, the ability to help them sell tour tickets, and using this exposure to make them famous. I’m pretty sure if Michael Jackson were still alive today he wouldn’t need terrestrial radio anymore to meet those needs. In my eyes, artists who are already successful can still sustain their success without the aid of AM/FM radio.

Another point that was made here was that radio actually follows trends, they do not set them. Let’s take a look at Krewella for a minute. Their track ‘Alive’ was already a massive hit in the dance music community before it went to radio. Labels don’t want to spend $30,000 to have a track tested on the airs if they don’t think its going to be a hit. That would be a huge waste of money for them in an already high risk business. I was a bit shocked at the amount of money labels have to pay terrestrial radio stations just to get their track played on air then only to see if people call in to request it be played again and again. There’s no guarantee the track will be a hit on the mainstream airwaves. These radio stations are making bank not only on the artist’s music but also from ads. Advertisers know you are listening and tuned into the music so it’s a great place for them to spend their dollars. Why aren’t any of these stations giving back to the artists every time their track is played? It just seems so backwards. The US is the only industrialized nation that doesn’t recognize these performance rights along with China, Iraq, and North Korea. One of those things is not like the other.