11 Jan Ringing in 2016 with The Chainsmokers & Nicky Romero 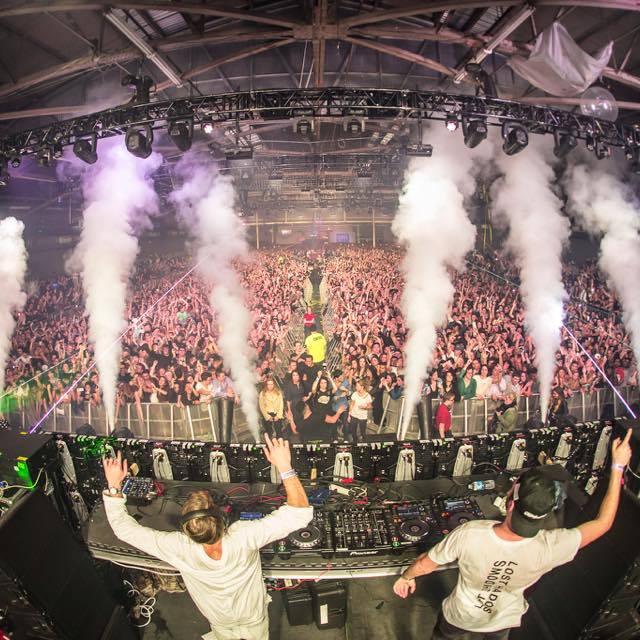 Ringing in 2016 with The Chainsmokers & Nicky Romero
By Megan Golish

What better way to ring in the New Year than beneath a sky of flashing lights, dancing to the beats of the dynamic duo known as The Chainsmokers? Well luckily, I was able to welcome 2016 in this exact fashion. Along with a dozen friends, I booked a ticket to this Pier 94 performance on New Year’s Eve in New York City that consisted of The Chainsmokers and Nicky Romero, along with opening sets from the up and coming Ansolo and Justin Bieber’s good friend Travis Scott. And as I anticipated, it was a show to remember.

For those who have never attended an event at Pier 94, located on the outskirts of New York City, this venue is gigantic and enclosed. Upon entering, you are surrounded by concrete floors and facing its L-shape structure. The main stage is located at the far end of the pier which is where each of the artists perform, creating the perfect visibility from even the rear of the crowd.

Scattered around the back of the venue were several bars selling not only alcoholic beverages but providing free water cups (which was greatly appreciated on this night where dancing was endless and hydration was key). The anticipation and excitement was almost tangible; each and every raver ready to begin the night.

It wasn’t long before the clock struck 8:00 pm and the show began, four hours shy of 2016. The crowd suddenly began to thicken as Ansolo’s set attracted each raver’s attention. The lights were streaming, bouncing off every wall and mesmerizing the entire crowd. For those who were not familiar with Ansolo before this event, well… they are now. This young performer pleased the entire crowd with an unbelievable set, keeping the energy at an all time high. The same can be said for the second performance featuring Travis Scott. This young artist successfully blended hip hop and electronic dance music making it all too obvious why Justin Bieber chose Travis Scott to feature on his new album Purpose.

Before we knew it, hours had passed and it was The Chainsmokers turn to steal the show right before the ball dropped. And with no hesitation, they did. The Chainsmoker duo Andrew Taggart and Alex Pall blessed us with a set incorporating popular songs such as “Until You Were Gone” and the infamous “Let You Go.” After what felt like hours of dancing, there was still one last performance: Nicky Romero. As a huge fan, myself, I couldn’t have been happier than in that moment when his set began. There was no better way to end the night and begin the New Year than bouncing the beat of Nicky Romero’s set.

Both times that I have attended Pier 94 I have been extremely pleased with the venue and the performers they gather for their events. I know that I am not alone when I say purchasing my ticket for this NYE performance was a phenomenal idea and unforgettable experience. Thanks to The Chainsmokers, Nicky Romero, Ansolo and Travis Scott 2016 was welcomed with open arms and positive vibes. For more information on events located at Pier 94, keep an eye on websites such as StubHub for ticket sales for future performances. Next time, it could be you having the night of your life!