Posted at 15:41h in Magazine by Denice 0 Comments
0 Likes
Share 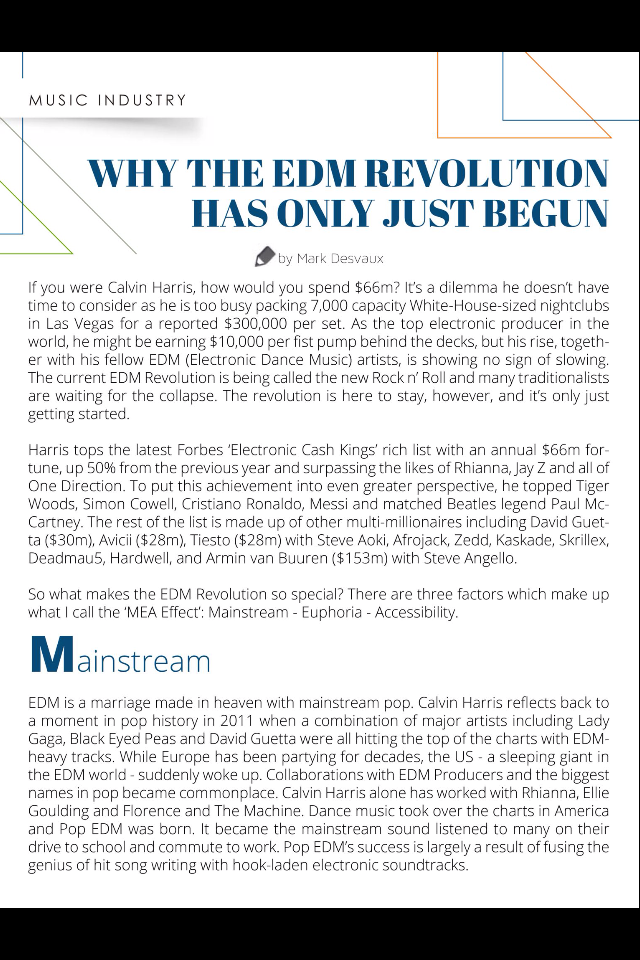 Why The EDM Revolution Has Only Just Begun
By: Mark Desvaux

If you were Calvin Harris, how would you spend $66m? It’s a dilemma he doesn’t have time to consider as he is too busy packing 7,000 capacity White-House-sized nightclubs in Las Vegas for a reported $300,000 per set. As the top electronic producer in the world, he might be earning $10,000 per fist pump behind the decks, but his rise, together with his fellow EDM (Electronic Dance Music) artists, is showing no sign of slowing. The current EDM Revolution is being called the new Rock n’ Roll and many traditionalists are waiting for the collapse. The revolution is here to stay, however, and it’s only just getting started.

Harris tops the latest Forbes ‘Electronic Cash Kings’ rich list with an annual $66m fortune, up 50% from the previous year and surpassing the likes of Rhianna, Jay Z and all of One Direction. To put this achievement into even greater perspective, he topped Tiger Woods, Simon Cowell, Cristiano Ronaldo, Messi and matched Beatles legend Paul McCartney. The rest of the list is made up of other multi-millionaires including David Guetta ($30m), Avicii ($28m), Tiesto ($28m) with Steve Aoki, Afrojack, Zedd, Kaskade, Skrillex, Deadmau5, Hardwell, and Armin van Buuren ($153m) with Steve Angello.

So what makes the EDM Revolution so special? There are three factors which make up what I call the ‘MEA Effect’: Mainstream – Euphoria – Accessibility.

EDM is a marriage made in heaven with mainstream pop. Calvin Harris reflects back to a moment in pop history in 2011 when a combination of major artists including Lady Gaga, Black Eyed Peas and David Guetta were all hitting the top of the charts with EDM-heavy tracks. While Europe has been partying for decades, the US – a sleeping giant in the EDM world – suddenly woke up. Collaborations with EDM Producers and the biggest names in pop became commonplace. Calvin Harris alone has worked with Rhianna, Ellie Goulding and Florence and The Machine. Dance music took over the charts in America and Pop EDM was born. It became the mainstream sound listened to many on their drive to school and commute to work. Pop EDM’s success is largely a result of fusing the genius of hit song writing with hook-laden electronic soundtracks.