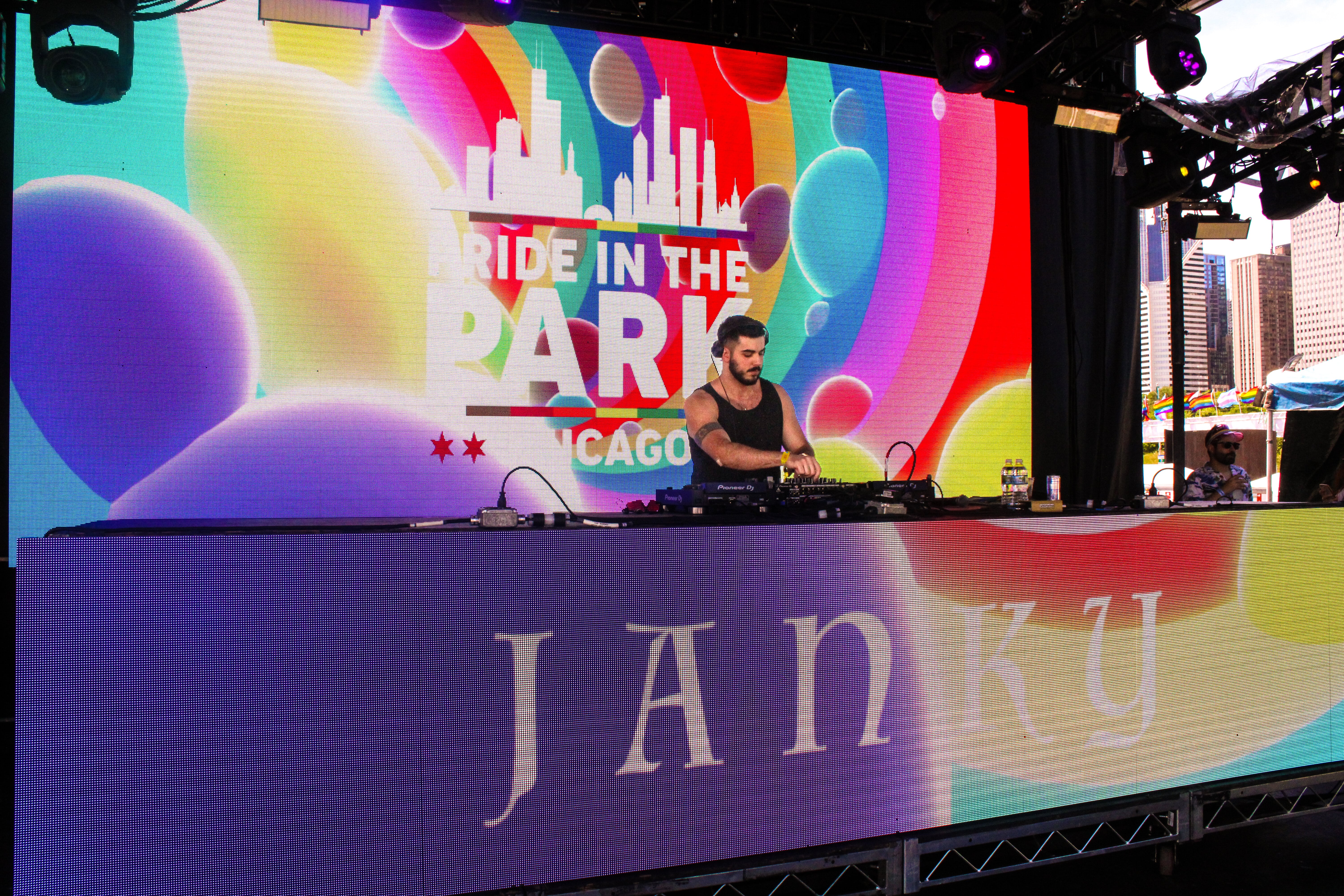 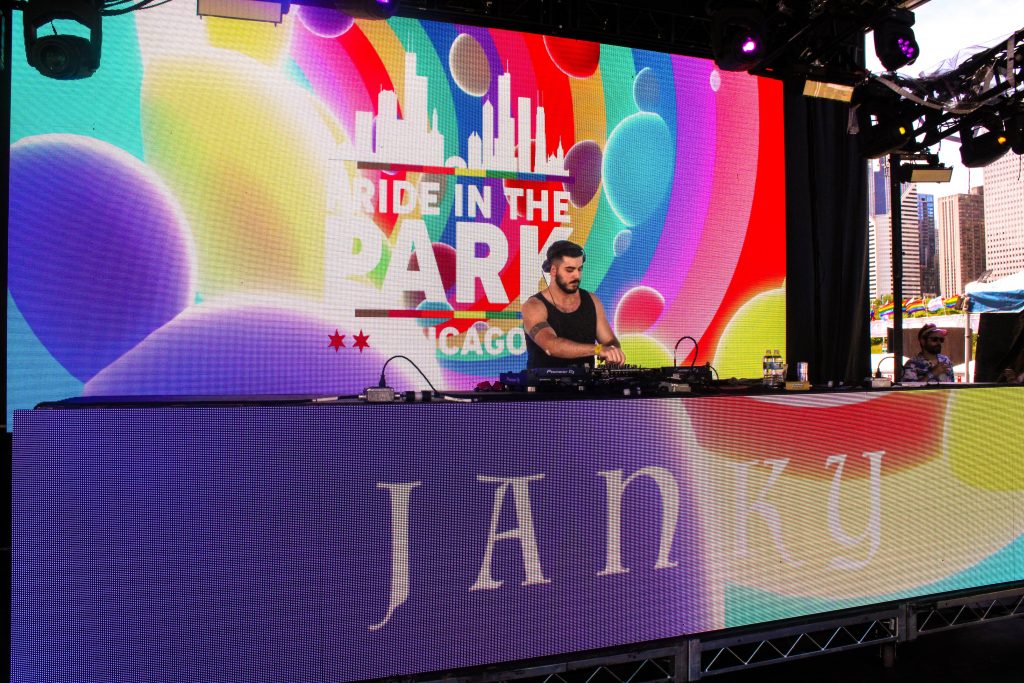 From Boystown to the Downtown club scene, Janky has become a prominent staple within the queer music scene with residencies at Hydrate and Joy District for a bi-monthly drag brunch. He is a self-taught DJ whose musical tastes were influenced by his father. Janky has been DJing for the last seven years.

Enjoy my interview below with Janky where we discuss everything from his early years up until now and his perspective on the music industry in Chicago, Illinois.

How did you come up with your DJ name and what’s the inspiration behind it?

My name is Cenk which is Turkish. I’m actually Turkish American and was born here in the United States. My parents didn’t really think through the name that they gave me with it being spelled C E N K. Throughout my entire childhood and even in adulthood, whenever my name was read it was pronounced Cenk although it’s actually pronounced Jenk.

My friends started calling me Janky so for me the name is kind of a play on words. It’s goofy and memorable. It ties in with the history of my childhood and is playful which is the kind of person I am.

I was born and raised in the suburbs of Chicago. I spent my teenage and young adulthood years coming into the city and getting into the party scene. I’ve now lived in Chicago for the last ten years. I also own a coffee shop in Lincoln Square. I’m a little bit of a coffee daddy by day and music daddy by night.

How did you become a DJ?

My dad gifted me his DJ equipment. When I was 22 or 23 I taught myself in my living room how to DJ. Then I started having parties. Eventually, those parties turned into warehouse parties which then turned into clubs. The clubs turned into festivals and then those turned into underground events.

When I was getting into the music scene I was always on the dance floor. When I started going to parties, I was always handed the aux cord and that’s kind of how I became a DJ. Rather, I was inspired to become a DJ. I’ve been DJing for the last seven years now and I have become an established part of the scene in Chicago. I love house music.

What inspired you to become a DJ?

I can comfortably say that all DJs, even before they started DJing, know they just have the ear. There’s a different way that we hear music and interpret music. I always had rhythm in my head whenever I would listen to music. It would be more of a profound experience for me and the taste that I was raised with.

My dad was a big music person too, so growing up I was exposed to techno, trance, and reggae. I also heard a lot of Turkish music which has a lot of drums involved like darbuka drums and beats. My love for music is what really inspired me.

I would say I do. I try to tie in a lot of different genres with my sound. Something I’ve recognized lately is the importance of bringing something different with a little flare of your own taste of music into your sound so you don’t blend in. I definitely utilize my past sound and integrate it throughout my sounds today.

Where are your DJ residencies?

I have established myself here pretty well here in Chicago, Illinois with residencies at Hydrate Nightclub and Joy District for a bi-monthly drag brunch. I’ve now had the privilege to play not only in Chicago but also in Tulum Mexico, and Malta. I’m looking forward to expanding even further.

Hydrate and Joy District are two different kinds of worlds to be in, at least music-wise. How did you get into all those different worlds?

Hydrate was one of the first clubs where I really have a profound memory of experiencing a dance floor. When I was there at the age of 21, it was the first place I lost myself in the music and crowd. It’s kind of where I discovered my love for tech-house and what it actually was.

I never really understood what it was before because I was self-taught in all of my interpretations of music. You know as a youngin, that’s kind of what we all do. Not all of us have mentors to teach us.

I remember Hydrate especially in the past was known for circuit music, top 40, and pop remixes. Those are all pretty popular genres in the gay scene but there wasn’t any real house, tech house, or minimal underground sounds in that neighborhood. I wasn’t crazy about the circuit sound, but I remember vividly, that every third track I really loved. Through that, I was able to discover what tech-house was through Hydrate.

It was a special moment for me to be able to start DJing there and become a resident DJ because it was always my goal to want to bring my sound, which is tech house, to the North Halstead area, previously known as Boystown.

As for Joy District, I’m there because me and my bestie, Chloe Daniels (who’s the host of the drag show) wanted to expand the drag scene outside of just the neighborhood. There are a few drag shows that have successfully done that over the last few years but we’re really trying to establish a foothold in the area. We want to expand the horizons and the audience for drag culture. 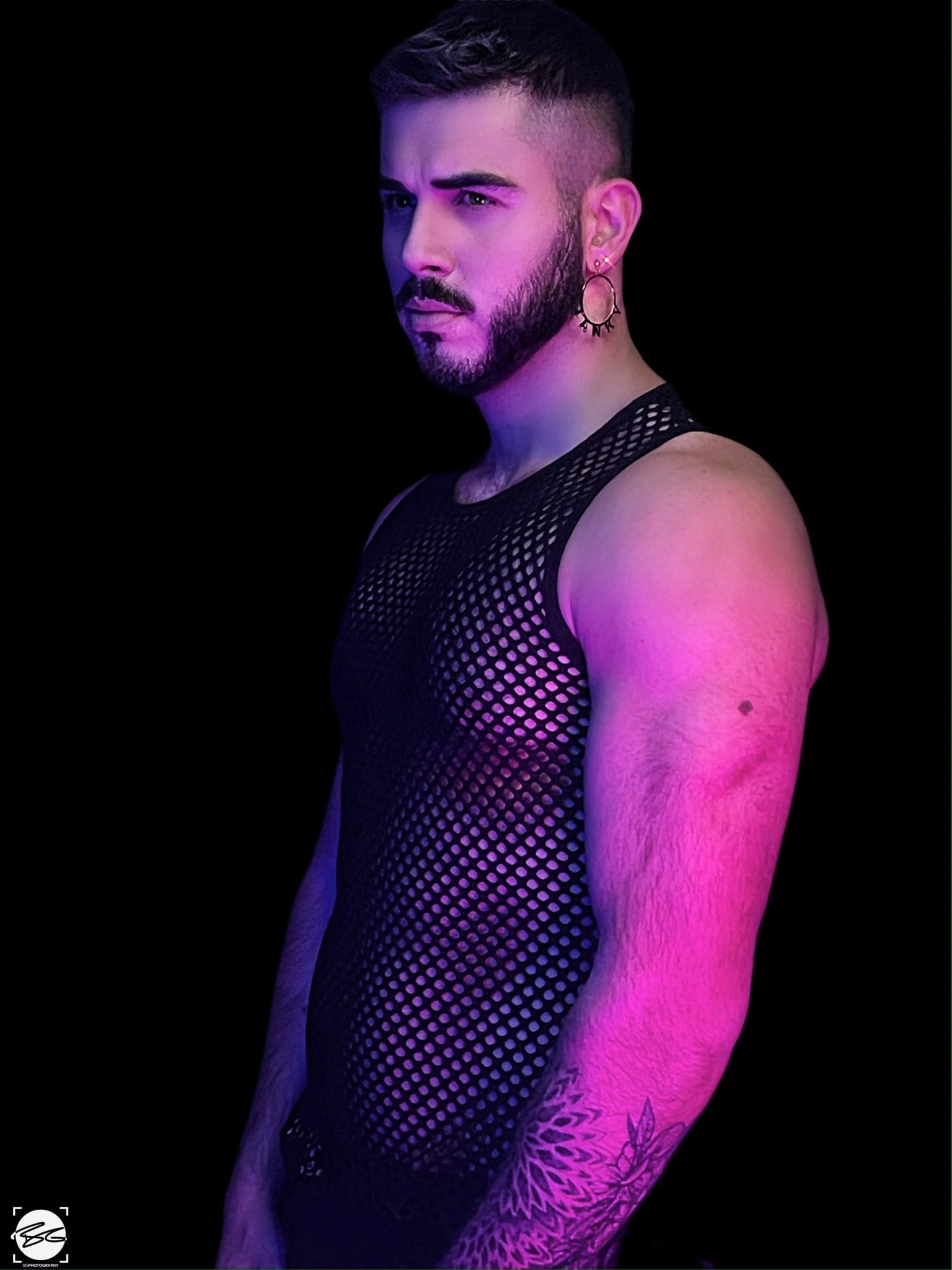 Having mentioned how not everyone has a mentor helping them through music, would you ever be a mentor, or are you doing so already?

Yeah! Music has always been about sharing. I always find it very special when I’m DJing an after-hours or a little more of an intimate space and people come up to me curious and want to learn. I’m always there happy to show them.

As far as being a mentor and taking someone specifically under my wing? Yeah, I would love to. Sharing is caring. Especially with music!

Music is a community, has the power to bring so many people together, and can help bring diverse talents to the forefront and maybe even create the next genre. Do you think music can help change the lack of representation in the industry, in the LGBTQIA+ community, and help progress us?

That’s something I’ve personally dealt with. I have my connections in the North Halstead area but I’ve also been a part of, and have friends and connections within the downtown area. I’ve worked behind the scenes as artist support at festivals like Mambi On The Beach and Spring Awakening.

I find it very frustrating that most of the downtown scene doesn’t find value in going out of their way to book LGBTQ artists for those festivals as much as they should. It’s past due and it’s exhausting. You know ARC Music Festival is coming up and from what I can see there isn’t any real profound effort to make a conscious effort to book LGBTQ artists, people of color, or people who are just in the queer scene in general.

It’s just kind of this vicious circle of booking your friends and only staying in the downtown area. I am more involved in the queer scene but I feel we need a little bit more of some ‘oomph’ and some desire to give some LGBTQ representation.

Yeah! I 100% agree with you. Along with that and the lack of women on rosters too. You don’t really see it.

Thank you for saying women as well. I’m so sorry I left part out. That is a huge thing I notice as well. One of my closest friends, Michelle Blue Nine, is a powerhouse female DJ here in Chicago and has been a huge influence on me and big support.

That’s something she’s an advocate for in the scene, at festivals, and in the downtown area. I notice it with her firsthand as well. It for sure is also a qualm not to be left out. The industry is lacking representation in all facets. Hopefully, events like Pride In The Park and advocates for these communities can help in shaping and expanding it so we start seeing that representation.

What are you most excited about Pride in the Park and getting to DJ here for the first time?

Honestly, what’s super exciting for me is seeing my name on a billboard, in advertising, sponsored ads, and everything. It’s pretty crazy to see your name on an actual massive billboard. It is pretty surreal to also have so many opportunities to be able to do press interviews like this one where I can talk and express myself freely in so many different ways.

With the festival itself, I am super excited to play and utilize the huge sound system. That’s always a unique experience and opportunity to be able to be a part of a larger production.

It’s a lot different than being in a tight DJ booth with half a booth monitor and a fan blowing behind you. So to recap, I’m looking forward to the exposure, experience, and being able to play music for the masses. It’s always a pleasure!

Did you manage to take your picture in front of the billboard when you saw your name?

Unfortunately, no because it’s at a busy intersection. To do that I would have to pull over my car and try to zoom in and take a photo. I was not able to do it yet, but hopefully, before they take it down, I can get one.

What’s next in the works for you?

June is always such a roller coaster and so busy and this whole month has just been nonstop over and over and over, which is a blessing. Booked and blessed is the best way to be! Generally, I’m looking forward to probably a little bit of a chiller schedule in July, but I do have a couple of really great gigs lined up. I’m very much looking forward to them all.

One I am very excited about is Witch Finger on July 9th with myself, Harry Cross, Derrick Carter, and Chachi Guerrero happening at a secret location. It’s my second time playing this event, but I attend them all the time. It is a super great queer-inclusive party so I’m very excited.

Which LGBTQIA+ event is your favorite? Swipe up to comment below and let me know!