14 Nov Imagine Festival Review: An Aquatic Experience Beyond Your Imagination

Imagine festival is the aquatic-themed festival held annually since 2013 in Atlanta. The festival has grown to become a staple in the festival realm. Imagine has gone from being held in Atlanta’s city center to grow large enough to move to the Atlanta Motor Speedway. That move to the speedway opened the opportunity for organizers to add camping and new stages to accommodate the new influx of revelers flocking to its doors. These additional options have heightened the Imagine experience.

The Atlanta Motor Speedway provides a large open space for a festival of this size. It has established infrastructure for which the organizers take advantage of. Upon entry, you can enjoy well-stocked and clean bathrooms as opposed to a port-a-potty being your only option. Once you are ready to enter the speedway, you pass through the stadium’s tunnel and are greeted with lights galore. Ascending down the bleachers, the excitement builds until your feet hit the speedway’s concrete. You’ve now landed on Imagine’s playground. 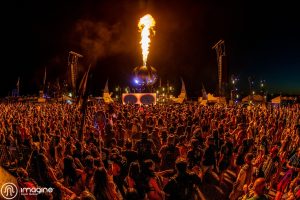 Disco Inferno: The bleachers lead you straight into the Disco Inferno. Thus, you step right into the party. Disco Inferno was home to the pre-party held on Thursday night. It also hosted the Dirtybird Players takeover on Sunday. DBP takeover featured Claude Vonstroke, Justin Martin, J Philip, and Justin Jay. Claude VonStroke founded Dirtybird Records, an independent label. He described his brand of house music as “tech funk.” It was definitely a welcoming vibe at Imagine.

Techyes and SixFeathers: If you decided to head to the right of the entrance, you’d find yourself at the Techyes stage upon which up and coming techno and house DJs rocked the partay. The SixFeathers stage was to the left and also provided up and coming DJs a home to shine. Both stages were strategically planted so that you had to pass them to get to the larger stages with the larger names. The stage placements allowed you to be sucked into their beats, thus compelling you to discover new artists.

Amazonian: It only opened on Saturday and Sunday, and it provided several surprises. The stage closed Saturday night with Louis the Child. Tipper and friends took over on Sunday, and Tipper himself closed the night. 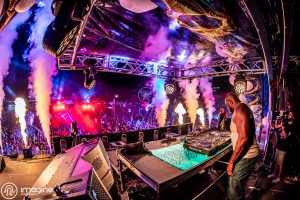 Oceania: The mainstage of the festival. All the heavy hitters were the stars of this stage. There are too many names to call out, but let’s just say the stage was stacked. 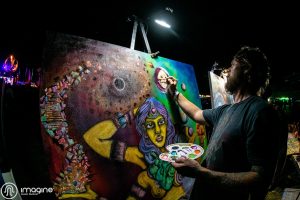 The Art Zone was a unique area celebrating the local artists. If you applied and earned a coveted spot, you had the chance to showcase your masterpiece. Festival-goers watched as art was created in real-time. The completed pieces seconded as awesome selfie backdrops. Many of the works utilized paint colors that were fluorescent under black light; even more awesome. 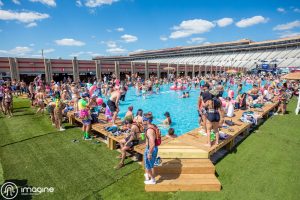 For those who wanted to swim, the Splash Pool was open, whether it be before the festivities or during. The Splash Pool emptied as temperatures dropped in the evening.  However, the VIP area surrounding the pool was lit. VIP provided jaw-dropping views of the main stage Oceania. If you headed back to the Amazonian, you’d find the water slide, perfect for the aquatic theme.

For the merch collectors, the offerings were slim. There was the apparel, but Imagine did not offer the large fans or pins to those who collect. Otherwise, the merch was as expected.

Every festival has its own flair. Imagine has the benefit of large, open space that will allow for more growth over the years. Their lineup provided acts that everyone would enjoy. The attendees were lively and colorful along with the aquatic performers. If you want a festival that has good music and good vibes, you can add Imagine Festival to the list next summer. They’ll even have payment plans available next year to make it more affordable. Get your tickets HERE. Now that you are ready to swim with the fish, click HERE to read our Imagine festival guide to plan your Imagine festival adventure

Looking for a new festival to fill the end of summer with joy? Scroll down and tell me that Imagine Fest is now on your bucket list.