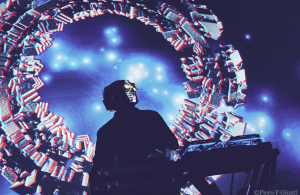 The extraterrestrial Goji artist known as NKRIOT returned from space once again to terrorize The Downtown Independent theatre in Los Angeles on May 24th with his exclusive, live, 3-Dimensional, Virtual Climax album release presentation. Rioteers, such as myself, all throughout the Southern California area attended this special album release extravaganza for the release of NKRIOT’s Virtual Climax Recording. Click HERE to find out more about NKRIOT.

Previously, NKRIOT took over the Exchange LA for the famous international Art Battle where he played three consecutive sets in one night while artists competed for the first prize. This time, the cyber-punk, Goji pioneer faced his most pure form of live performance to date by collaborating with his visual artist “Cloaking” to create an out of this world 3-D interstellar experience for his fans. When I had the pleasure of personally interviewing NKRIOT just a few months ago, he briefly mentioned this event with great excitement and revealed that it would not want to be a show you missed.

Featured with his completely original music, inspirations from the dystopian debut of avant-garde film THX 1138 in 1971, directed by George Lucas, and Ridley Scott’s replicants of 1982 Blade Runner were systematically presented during his show. With his live visuals, performance, and instrumentals expressed at the Art Battle, I fully agreed that this live 3-D experience was not something you would want to turn down.

This interview was not part of my original plan when attending his show. However, once I arrived on the scene, I immediately had the urge to ask NKRIOT a series of questions. His visuals, new sounds, and most of all, the newly released Virtual Climax Recording were only a few of the hot topics that evening. 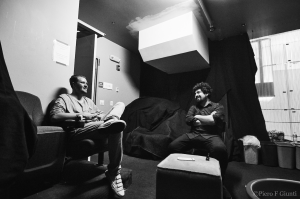 What was it like going from background music at Art Battle to being the main attraction here at the Downtown Independent theatre tonight?

Well, it was definitely a different experience. The thing about The Exchange is that it was more psychological. By that, I mean how I can immerse myself as an artist, meaning the daily routine of a DJ. They go into a club and see all the different forms of art, and I thought to myself, “How am I going to be able to move these people and to also dictate their personality?” See, this is why I did this show in a theatre because when you’re in a movie theatre, you can’t use your phone. Everyone is relaxed when watching a film at a theatre, and the audience’s full attention is on me.

It was a nice way to get my fans to actually sit down, relax, listen, and really see what my music is all about. Even some of my closest friends had the chance to listen to me from a new perspective. It was extremely motivating, and it felt like I was in the setting of my bedroom – dark, closed in, with a big ole TV behind me playing some crazy Windows 95 visuals.

Explain the kind of visuals you portrayed this evening. What specific portrayals did you use and why?

With Ryan “Cloaking” doing all of the visuals, I told him at the beginning that I didn’t want to see any of the visuals that he had while I was playing. I wanted it to be a spontaneous jam session between him and I. Sound is 3-D in the sense that it surrounds us and intercepts out chest, body, and mind. As per usual, everything was done live and on the spot. When I made a transition between songs, it was his job to switch it up on the visuals as I went along. Every piece that you witnessed, whether it was the music or the visuals, was all done live. There is not one show of mine that is the same.

How has your music changed from your previous albums to your newly released Virtual Climax Recording?

My first album was a poetic novel to what I was going through in my life. That’s why it was more lyrically driven. However, Virtual Climax Recording goes more in depth of the mind of an individual without the use of any words. By taking my past experiences, I was going through and translating them into sounds and frequencies rather than words. The best way I can describe it is a freight train going 300 mph and it can-not-stop.

Virtual Climax Recording is very slick and immersive. The early stages of every one of my songs are going to be pushing the limits and boundaries of new genres. There are specific sounds that I use within each song that distinguishes me from others, meaning when you hear it, you know its NKRIOT. I like to tease my audience with new sounds and releases for the future. Why stop? Why try and attract only one crowd?

Talking about your on-stage setup. Have there been any new instruments or synthesizers added to your setup tonight? Or even in your new album? New Sounds?

Mostly just the SP 404 and the sampler. I’ve been incorporating a lot of the sampler now because of the production level. You can’t do the kicks and the drops completely live. More recently I’ve been incorporating backdrops of drum & bass, and then I do everything else. But the cool thing is that I can re-sample that in my own way and basically just continuously loop it. Ultimately, I want to be up there today where all those DJs are nowadays but do it in my own gritty and nasty way. I might use a sample that everyone knows to hook the audience but will end with my own sound and technique.

First and foremost, EDC was freaking amazing. I had no idea it was like the way that it was. The sound design background that I come from looks down upon EDC. However, when I was there, it was almost like a class for me. I was studying everybody. The DJs were the professors, and I was the student, learning and studying first-hand from the best. It inspired me to the point where I thought that I could be that but do my own unique thing for the next generation to come. We met this random couple that was friends with Infected Mushroom. Hopefully, we will see if we can get together in the near future. Being at the Las Vegas Motor Speedway during EDC was an almost euphoric feeling. Dude, I wasn’t on drugs – I wasn’t even drinking. I was there just to enjoy myself.

My goal right now is to play at EDC 2019. I’m going to fucking do it. I will do anything and everything possible to make that dream of mine become a reality. I was hyping everyone up, singing along, doing everything I possibly could to make my first EDC experience a great one. After I got home from Vegas, I had so many fans commenting on my Facebook and Instagram. People were telling me how great of a set I played at EDC when I just hopped up on an art car for a few moments.

Rezz, no question about it, was my favorite set of the whole weekend. You know why I loved her set so much? It’s all original. She transitioned from dubstep to progressive house to like 80s throwback. I just (REZZ)ionate with her in the sense that we have the same mindset when it comes to sound design; I respect that. Rezz I love you!

3-Dimensional experiences are usually for films at the theatre, right? Wrong. During the entirety of NKRIOTs set, every unique visual portrayed was uncomfortably up close and personal, yet very enticing. However, this was done intentionally by the dangerous duo that is Cloaking and NKRIOT.

From background music at the famous Art Battle to being the main source of attraction at LA’s Downtown Independent theatre, NKRIOT never seems to disappoint with his uncanny way of musical expression. No matter where the venue, whether it be a subway tunnel or main stage at the Electric Daisy Carnival, NKRIOT releases unpredictable pleasures that his fans can’t even fathom.