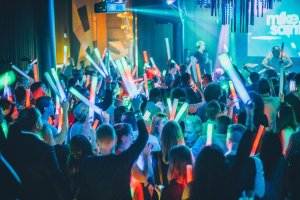 Hey EDM World followers! We have some exciting news, your Wednesday nights are about to be transformed to be P.U.R.E. at Haus Nightclub in NewYork this Fall 2017.

Haus Nightclub located at 285 West Broadway is hosting P.U.R.E Wednesdays. A brand new EDM event series that embraces our culture and philosophy of PLUR. Haus Nightclub will be spreading PEACE, UNITY, RESPECT, and ELECTRONIC every other Wednesday starting September 13th. The fall series finale will be sealed with LOVE on Valentine’s Day, February 14, 2018. But no worries, there will definitely be more dates to come soon after.

The EDM event series, P.U.R.E. at Haus Nightclub, will be presenting some of electronic dance music’s most respected DJs and producers at this high-end, intimately sized, gorgeously designed and decorated venue in New York City’s Tribeca/Soho district.

This will not be your regular degular club night event, oh naw… We are Ravers! and as such the colorful P.U.R.E team and DJs will don a fly ensemble in accordance to each individual nightly P.U.R.E. theme. We encourage our beautiful Ravers to join in the fun too.

Make sure you don’t miss the very FIRST EVENT: 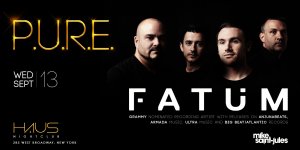 Do you want that Early Bird General Admission Pricing?? Oh, you do huh…

Well, get to clicking because Tickets are Available Now