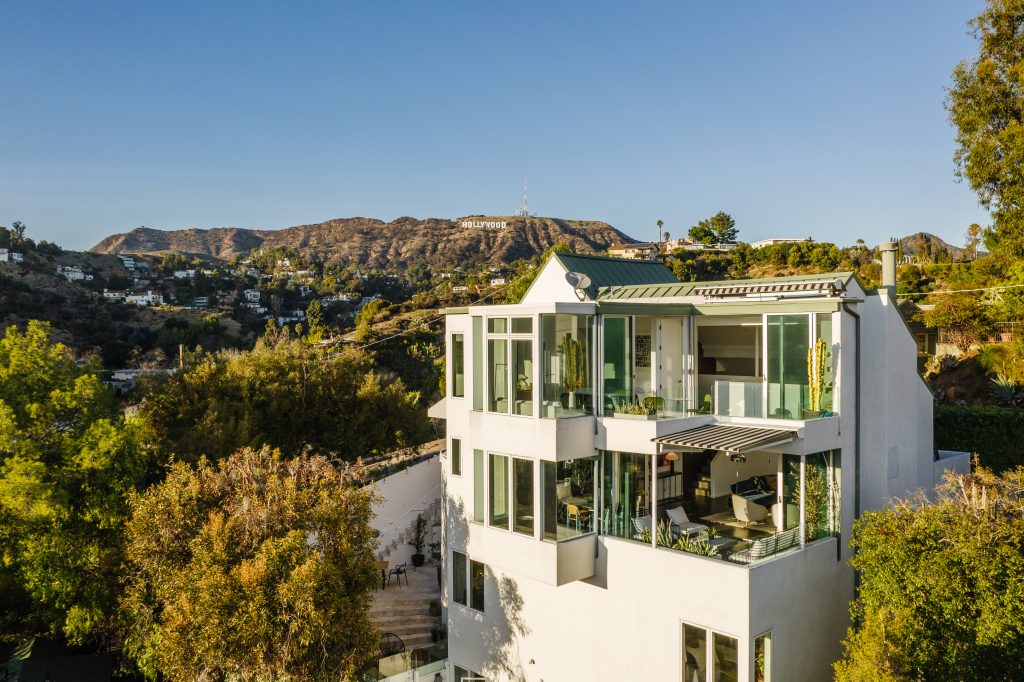 Did you know Diplo has dropped his Hollywood Hills pad and put it on the market for $2.7 Million? Grammy Award-winning DJ, record producer, songwriter, and Mad Decent label founder Diplo has officially ditched the canyons of Hollywood Hills for breezy beach life. After purchasing Kid Rock’s palatial Malibu home in late 2020 for $13.2 million, he is now putting his former digs on the market for a cool $2.695 million.

Known outside the EDM community as Thomas Wesley Pentz, Diplo began his music career as a radio DJ in Orlando and rose to fame after playing in nightclubs around the world. Diplo leads Major Lazer and is a member of Jack U alongside world-famous DJ Skrillex and more.

Situated above the famed Beachwood Canyon at the end of a quiet cul-de-sac just below the Hollywood sign, the four-story estate spans 2,524 square feet. It offers four bedrooms, six bathrooms, a music studio, and spectacular views of the Los Angeles skyline.

Staged by ASH NYC — the acclaimed design and development firm best known for its ultra-chic boutique hotels including The Siren in Detroit and Hôtel Peter & Paul in New Orleans — the residence’s future buyer will have the option to purchase the one-of-a-kind furnishings for an additional cost that complement a unique style at Diplo Hollywood Hills Pad.

The heart of the contemporary home is the open-plan, double-height great room. Flooded with natural light and connecting to an adjoining airy terrace, this space is a nod to Diplo’s bold personality and features bright blue-and-yellow accents in unique forms, alongside a constellation of hues and custom artworks. 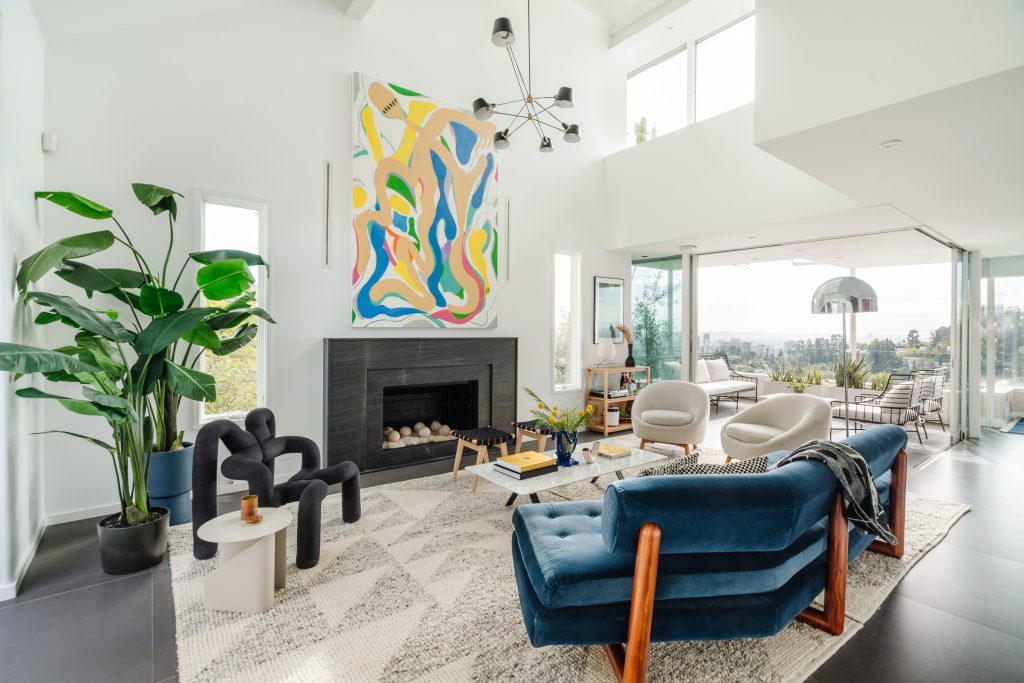 What We Love About The Pad

Floating above the city lights is the sprawling penthouse suite. It occupies the entire top floor. This level features a lofty office or lounge space and a spa-like bath. There are floor-to-ceiling windows present and terraces that gaze toward the ocean.

Next is the lower level of the home. This part is accessible via a private entrance and holds the sound-proofed recording studio. The studio is equipped with instruments including a keyboard and guitars. A disco ball hangs in the studio from the ceiling and reflects the sun during the day while keeping the party going all night.

Additionally, other home highlights include a yoga retreat, outdoor meditation space, multiple terraces, and an inviting courtyard. Sounds like a dream place to relax and unwind from a long tour schedule if you ask me! I can see why Diplo chose this home.

A Grand Look Inside

Now for the eye candy. Check out some more exquisite photos of the home currently up for sale below. Can you picture yourself here? I know I can with that view! The home is listed with Eric Lavey of Sotheby’s International Realty if you want to snag it off the market. 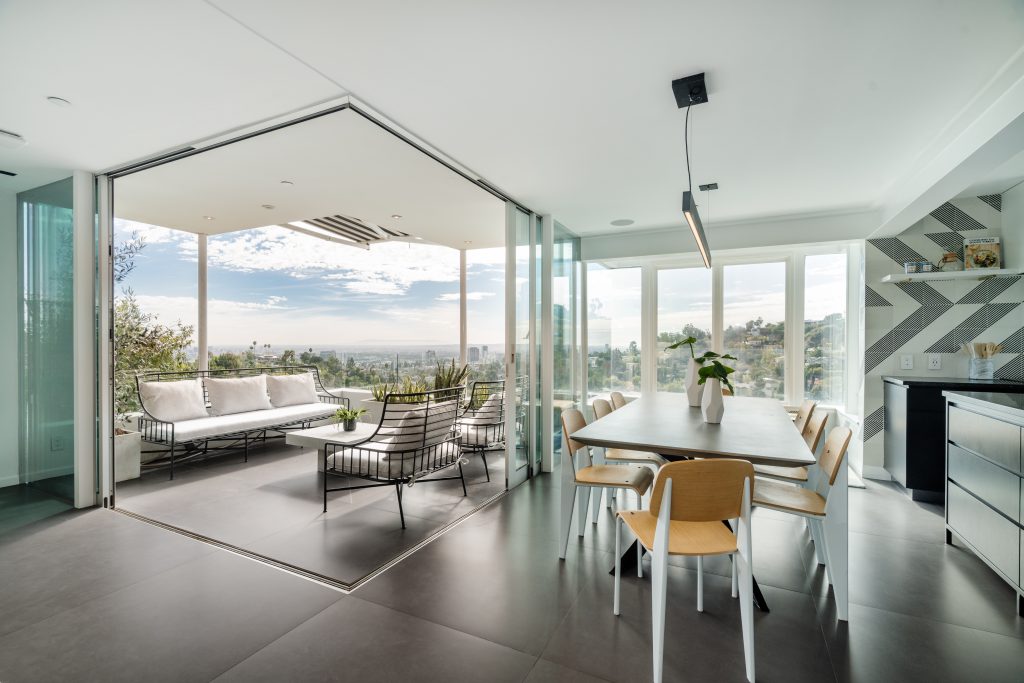 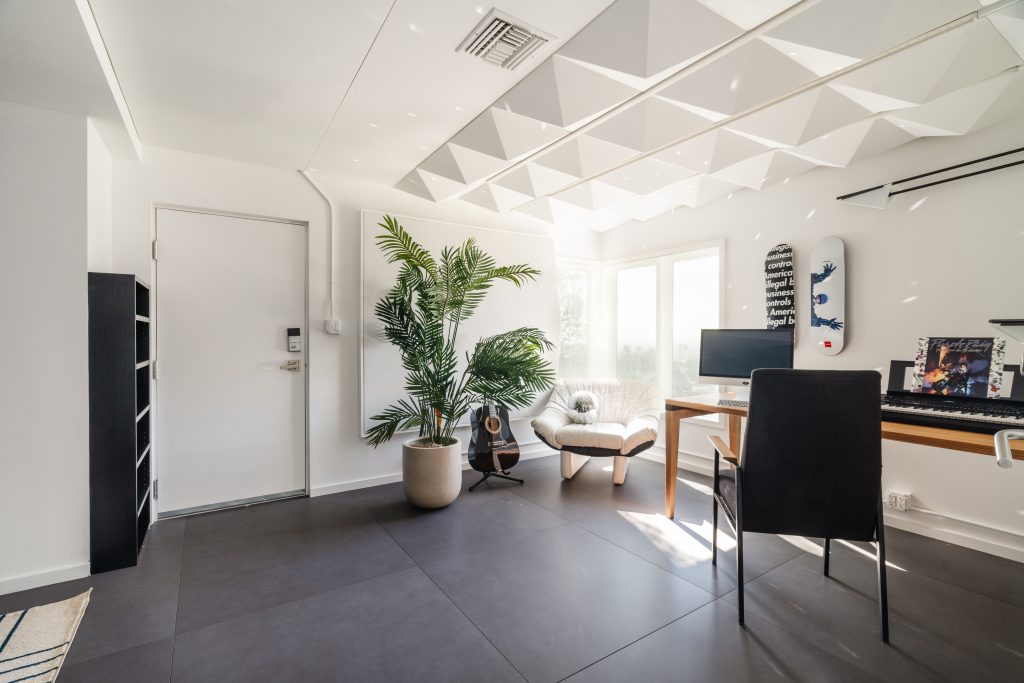 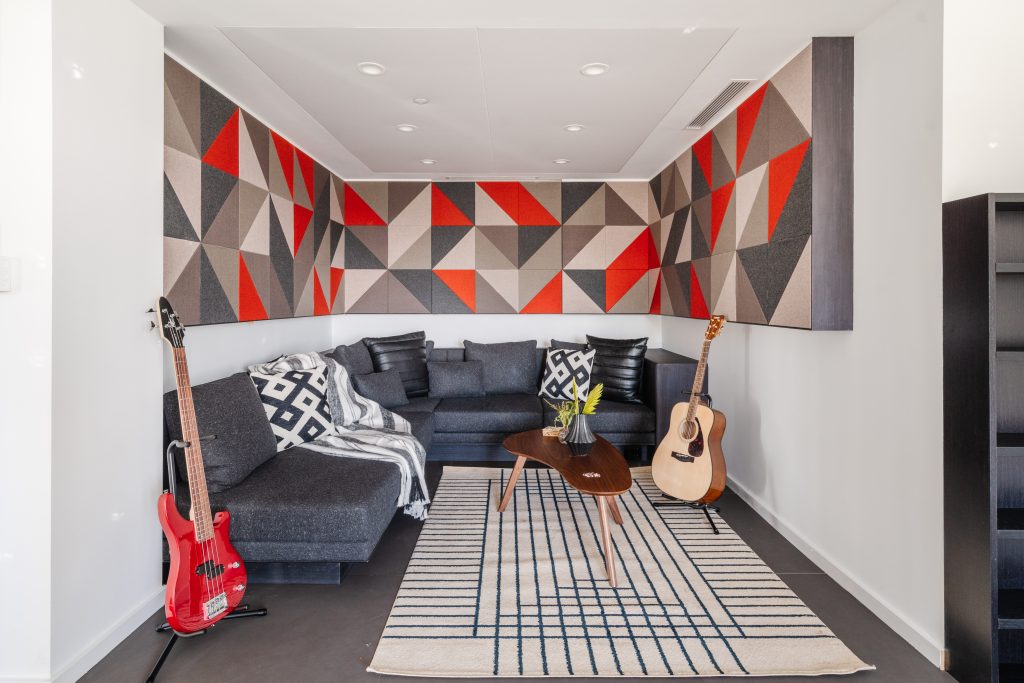 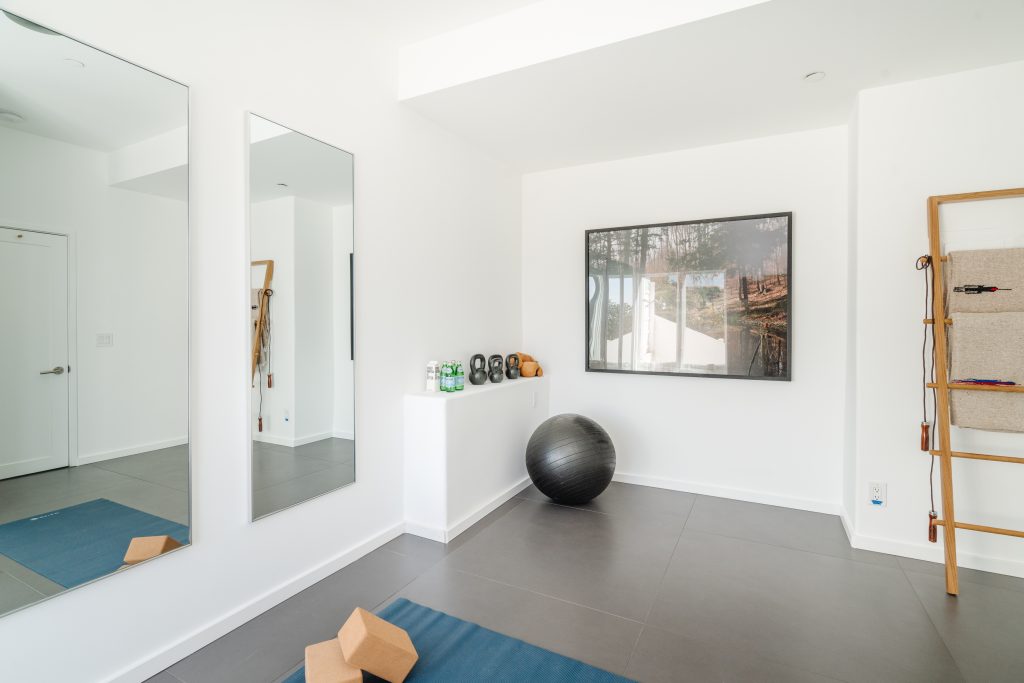 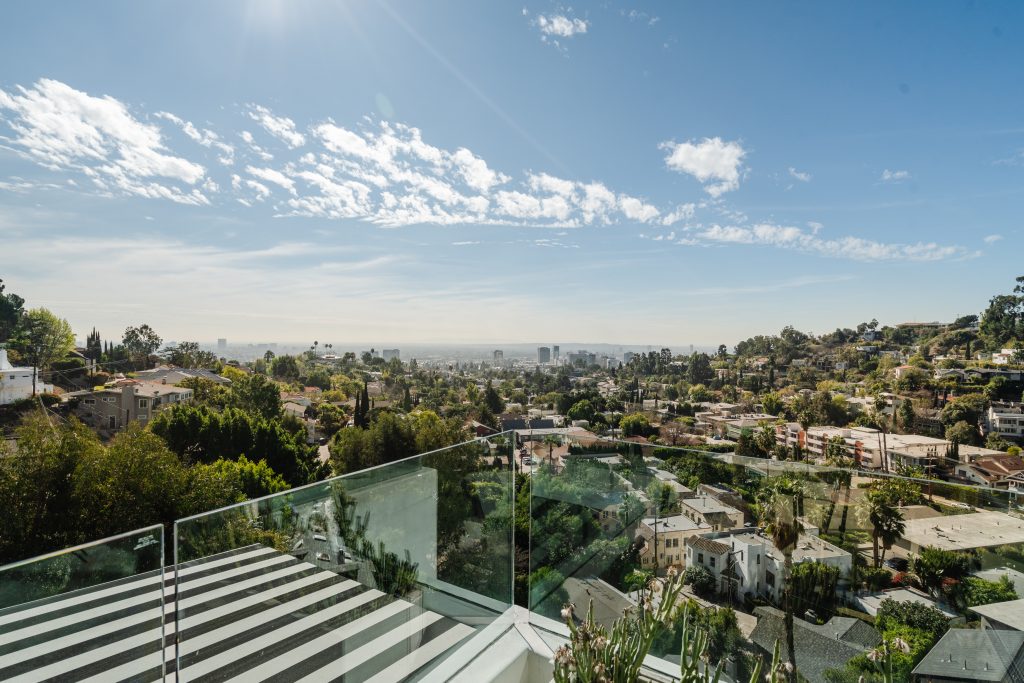 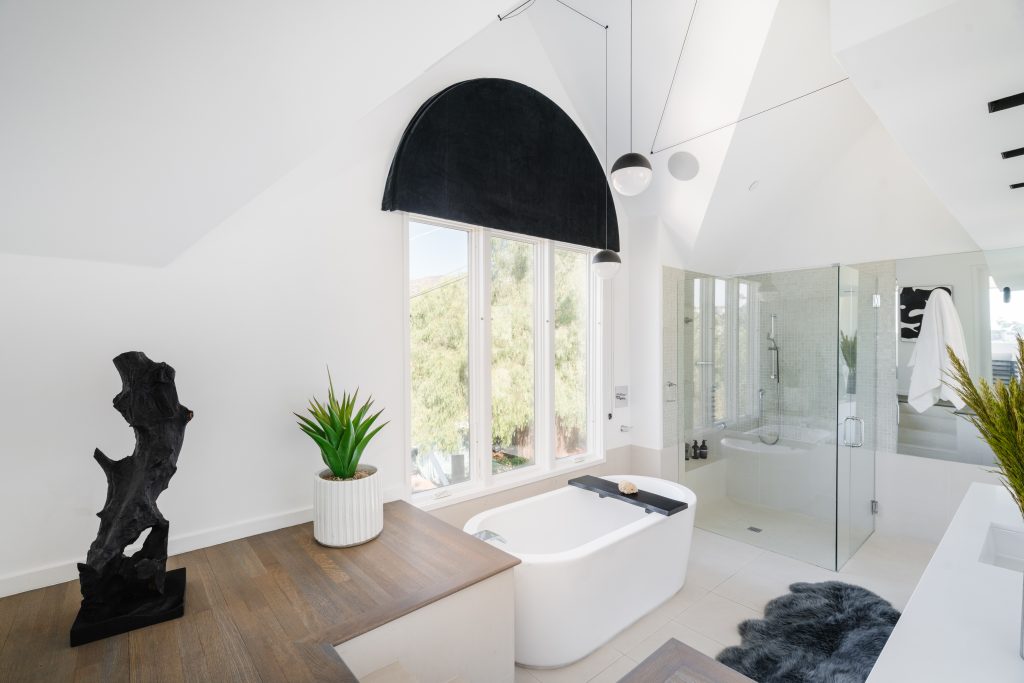 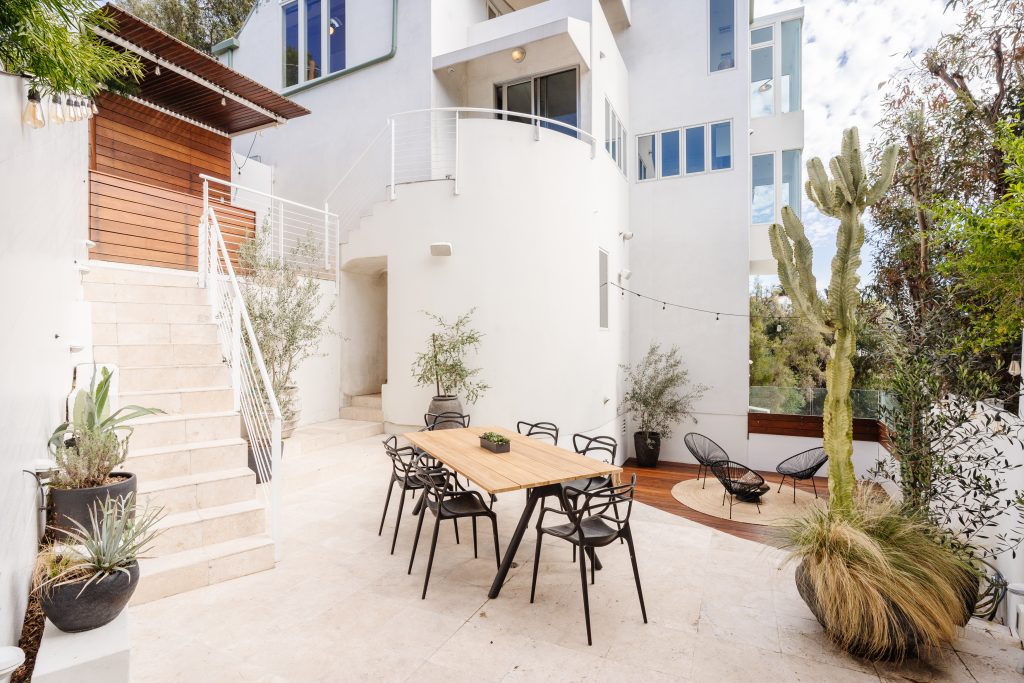 Do you like the design of Diplo Hollywood Hills Pad or were you surprised by it? Swipe up to comment below and let me know!