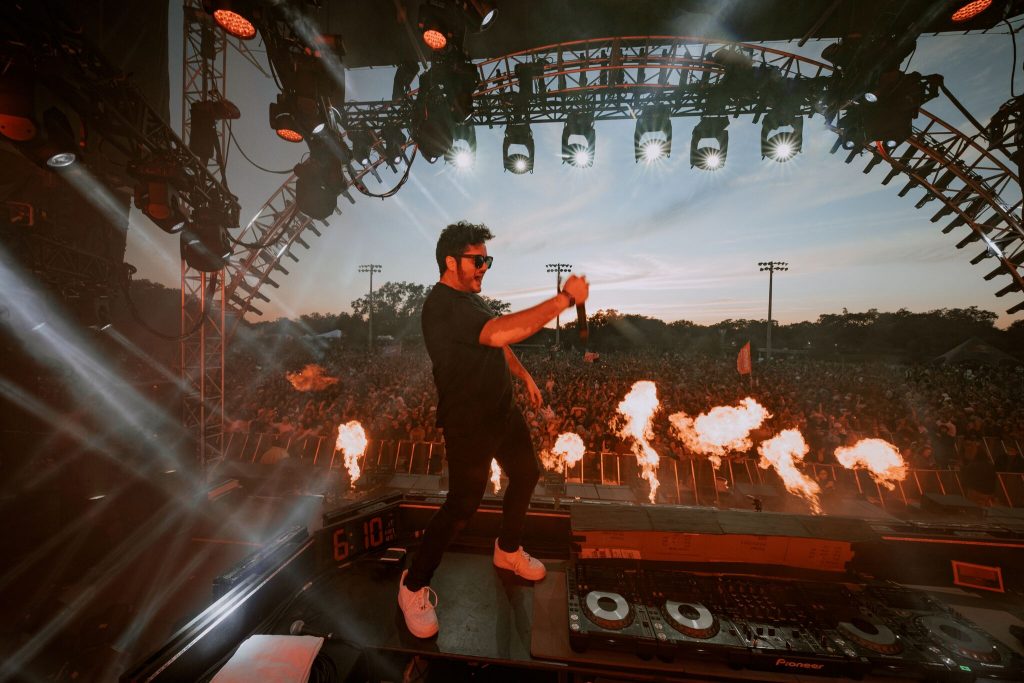 Boombox Cartel is keeping things alive as a must-watch duo! What started out as two creatives who knew of each other in Monterrey, Mexico later led to joining together to create Boombox Cartel while attending the same music school in Minneapolis, Minnesota. A few years later, the highly talented dynamic duo, Americo Garcia and Jorge Medina, still have no fear and are continuing their journey to the top while making sure they represent where they are from.

They have produced massive tracks with some of the most well-known names in electronic dance music. Their original tracks and exceptionally well-produced remixes are bringing them fans from all over the world. Without their fans, Boombox Cartel would not be where they are today, spreading love and good music. I sat down with Americo before Boombox Cartel’s performance in San Marcos for their Rogue Tour.

How was music a part of your life growing up? What was your childhood like?

Growing up in Laredo, Texas it was like a middle school full of punk bands, skating around and hanging around the mall; just like skater punk vibes. In my middle school, I was in band class, and it was just like being into that, and also, my mom would put me in every single class. Literally, I was in karate, I was in tee-ball, and then my mom put me in piano class and acoustic guitar class. So, thanks to my mom, I got really into it. As a fan, I was just listening to punk rock and then made my way to hip-hop. And a moment of time came by, you know early dubstep, early Rusko when Rusko was barely heard of in the States and Datsik. It was like early on, one song, that’s it, and then all of a sudden, it just progressed. I just went on for a little ride, and here I am now. It was really interesting – I’m really grateful for that.

Who were your biggest mentors growing up? How did they influence you to make music that you want to produce?

Electronic artists, mostly because of the boundaries they push. Being in rock n roll is really fun; it’s the same four chords for most of the songs. The guitar, you know, you can only change the guitar sound so much.

Back then, I didn’t imagine electronic music as a scene. It was just that one song I would hear that I would have on repeat for weeks and weeks, and then I would go on to the next (song). Early moombahton, reggaeton, especially when I moved over to Monterrey, it was reggaeton everywhere. It was being on computers and stuff, so that was kind of the bridge of the acoustic world and the electronic world. In Mexico, listening to reggaeton then hip hop and then discovering EDM because Skrillex was big! Diplo has always been a pioneer as well. I was inspired by Diplo, Munchi, and Skrillex. I was inspired by a lot of other rock n roll producers, even Passion Pit. A lot of people throughout my life just scattered. A mix of everyone – different genres, different styles.

How would you describe your sound without using genres?

It’s just like a blender of things I’ve learned throughout the years.

It’s been almost a year since you released “Phoenix.” What were your expectations while producing this track?

It was just mixed emotions of what we were feeling, what came about. You can imitate something, and you can go for a certain style, but that EP was like what we’ve learned throughout the years, and this is what’s been going on.

Collaboration has been great for you guys. Do you guys find that your creative process is enhanced when you have another producer to bounce ideas off of?

I don’t know if I would say enhanced, but it’s like a bubble meets another bubble, and it’s like, “Oh how do you do things? How do you see things?” Some people are drum heavy, some people are melodically heavy, and some people see music a different way. When you incorporate your style into their style, you naturally create something else completely different. Collaborations keep EDM very progressive.

Who are some artists outside of EDM you would love to collaborate with and why?

I would say Kendrick (Lamar), Passion Pit, Mac DeMarco, Red Hot Chili Peppers, and Mike Dean. Literally, there are so many people I would like to work with. There are so many great artists out there.

I’m here in San Marcos for a show on your Rogue Tour. How do you choose your tour locations?

There’s a promoter involved, there are the fans involved, there’s our availability involved, and our schedule is involved. Mostly, because the city really wants it. You get the tweets and the Facebook posts about it. Our agent and the promoters start talking and let us know what’s going on. Then it’s just the team, the production we bring out. Every show is special. We work with the venue, work with the place, and what can we bring in. How can we make this great? It’s mutual; it’s everyone. The fans, the artists, the people behind it under the hood; it just keeps everything going.

How do you prepare for shows? Do you have a pre-show ritual?

Not really, just being prepared mostly. There’s no tricks or one way to kill a show. Just be prepared and be really organized with your team. Keep your team close. Everyone has to be on the same page. That’s the ritual right there, making sure your whole team is put together.

How do you plan your sets? Is it all pre-planned?

It’s not planned out. You learn and you discover new music, new styles of music, and you just incorporate that into every area you are in the world.

What’s the experience like touring internationally, and does it influence your musical outlook and creativity at all?

Traveling does, but most of the time, we’re in cities for 24 hours then we’re back at home. I like to work at home, but I get inspired outside. I like to travel, I like to see, I like to hear other music and other styles and where that culture is at. Then when I come back home, I implement it in some sort of way. International travel is really really beautiful, and it can get really tiring sometimes, but it’s all good!

Last year Boombox Cartel went to Asia for a tour. How was your experience there?

We love Japan, the whole crew. Japan is just incredible – the innovation, the people, and how nice everyone is. Thailand is like the Latinos of Asia, kind of – just like the cilantro, the garlic, and the onions. Everyone is just chill. It doesn’t matter, don’t worry about tomorrow, just worry about today. Everyone’s just hanging out. Everywhere there are inspiring places, and some places make you feel really good. Different cultures in Asia just make it unique.

What do you love about your fans, and how do they motivate you?

Literally, without them, we wouldn’t be here. I would say the fact that they are really supportive and they listen to our music, like just streaming one of our tracks that literally helps us out to keep going and going and going. Fans are the water to the project. They’re everything, and they’re everywhere. They help us in so many ways. 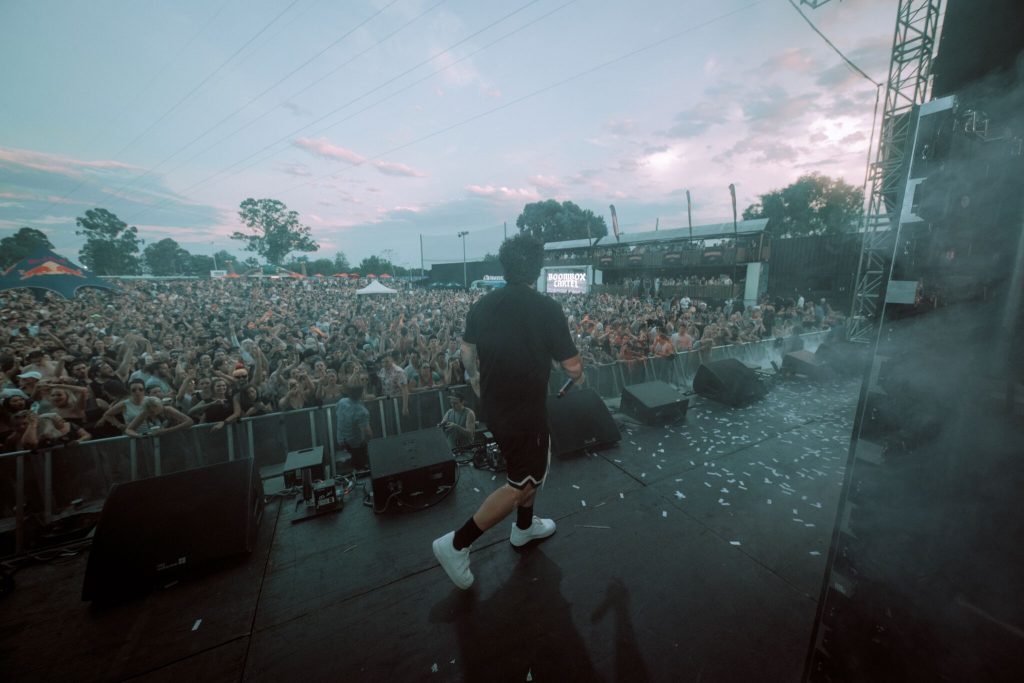 What are your interests outside of making music?

I’ve been doing a lot of action sports before music; it was playing paintball. I’m heavily into Fortnight right now. Soccer in Mexico. Mostly, it’s all around the arts. With Cartel merchandise (the merch company we have), we do everything from scratch, making sure the merch is something we would wear, something we would rock. There’s a lot of love put into it. We just have a great team behind it too that keeps it alive. Anything that’s in the arts and music. If I’m not playing a show here, I’m making music at home or something involving the arts.

What are your top three favorite girl scout cookies?

Thin mints – that’s the top! And there’s a chocolate one, samoas. There are only two kinds that I like. Those are the greatest flavors right there.

What is something unique or interesting about each of you that might surprise your fans?

I don’t know, I’m not really like a party person. I’m like a perfectionist, kind of; I like doing things right. I don’t drink, I like music a lot, and being in the EDM world, it feels weird, but I love it. I’m a pretty serious person.

What do you want fans to take away from and/or feel while attending your live shows?

Happy. Forget about problems, at least for an hour and a half, at least for a little bit. Just take them on a little journey, a little rollercoaster. I want to put a smile on someone’s face.

What kind of legacy would you like to leave behind as artists?

Discover genres and blend stuff. Create something new. Create stuff from scratch. Bring two cultures together. Just merge two beautiful cultures together – come up with a style of music or something. I want people to see around them, not just narrow themselves down and stuff like that. I want to open doors, keep creating, doing new things, and keep exploring. 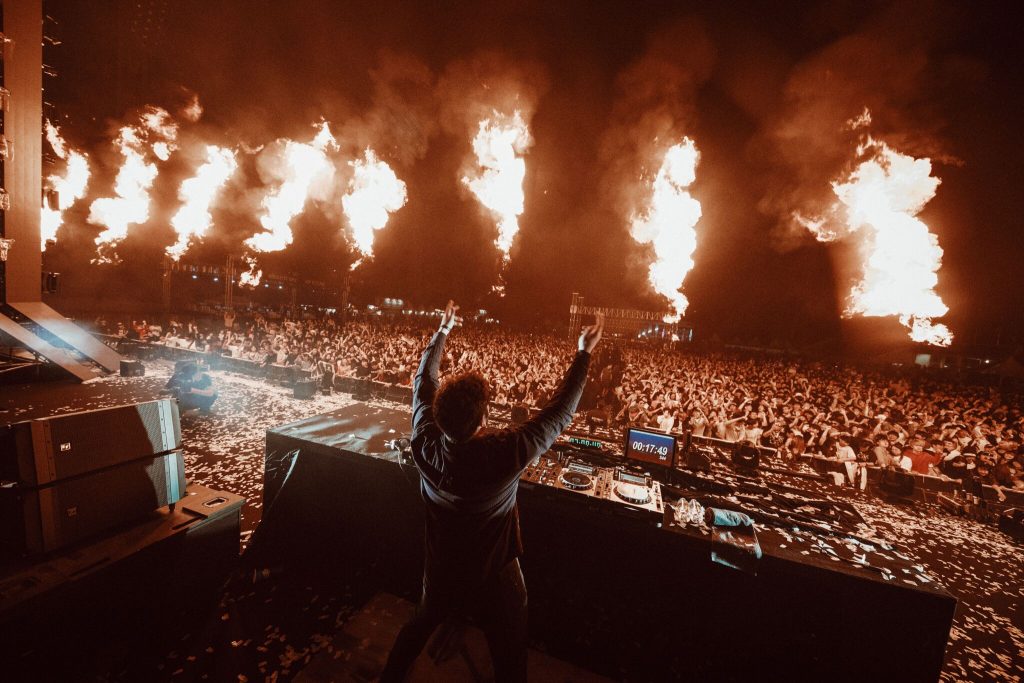 Where will you see Boombox Cartel on their Rogue Tour?! Swipe up to comment below and let me know!