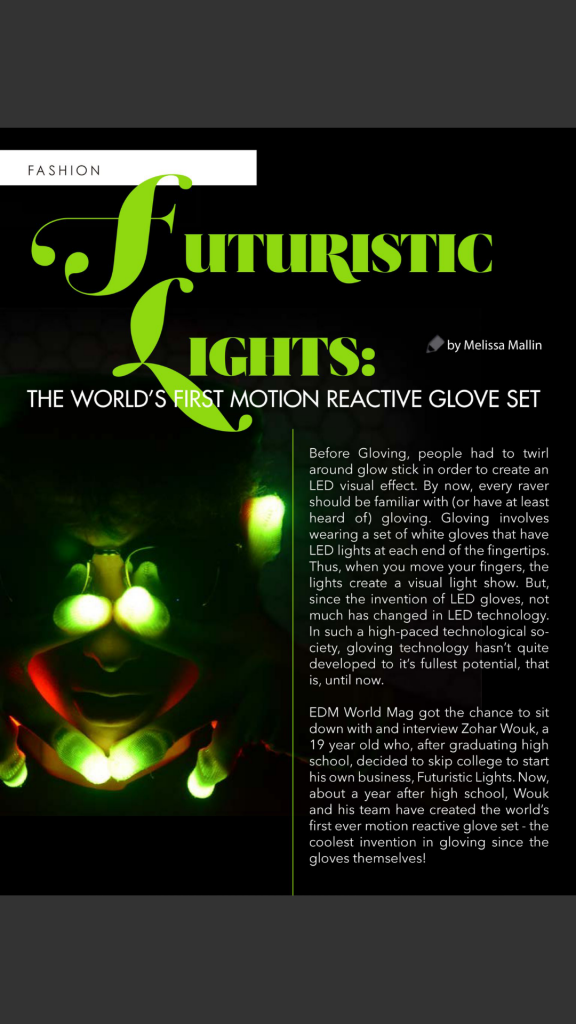 Before Gloving, people had to twirl around glow stick in order to create an LED visual effect. By now, every raver should be familiar with (or have at least heard of) gloving. Gloving involves wearing a set of white gloves that have LED lights at each end of the fingertips. Thus, when you move your fingers, the lights create a visual light show. But, since the invention of LED gloves, not much has changed in LED technology. In such a high-paced technological society, gloving technology hasn’t quite developed to it’s fullest potential, that is, until now.

EDM World Mag got the chance to sit down with and interview Zohar Wouk, a 19 year old who, after graduating high school, decided to skip college to start his own business, Futuristic Lights. Now, about a year after high school, Wouk and his team have created the world’s first ever motion reactive glove set – the coolest invention in gloving since the gloves themselves! 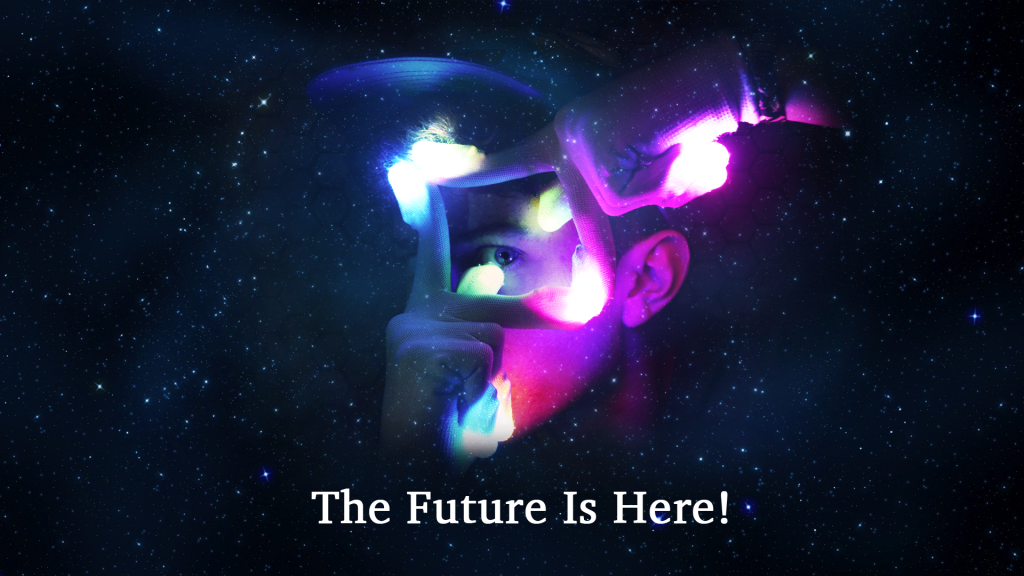 Please give our readers a brief overview and some background information about the company and how Futuristic Lights came to be.

I started the company after I attended an entrepreneurship program in Silicon Valley. It was a two month program that I took in the last few months of my Junior year of high school. I was 17 at the time and the youngest one in the whole course. After the program, I really wanted to start something. I had a few ideas, but Futuristic Lights really struck me the most, both for learning and just because I love the art form and LED stuff. It’s great, it’s cool, it’s fun. So, I thought, “okay, I could learn a lot from this.” We have to do manufacturing, we have to do software engineering, we have to do marketing – all that fun stuff. I figured this would be a great thing to do, so I did it! I started the company with a friend of mine, who is the CTO and we co-founded it together. Now, we are a team of five people.

We originally started with a different glove-based product. We worked on it for about a year, but ultimately decided to pivot to the Kinetic for a lot of reasons. That was a really hard decision because after spending a year on something and then realizing that it just wasn’t going to work was really disappointing. We had already been working on the original project for about a year and we probably still had about a year or two to go. Nobody was getting paid, we were all working for free, so it just wasn’t working. We had to do something else to make it viable.

Basically, we had all of these ideas, so we narrowed it down to one really cool feature, which was the motion reactivity from this product and turned it into it’s own product, because it was already ridiculously cool. We wanted to focus on one cool development and I’m really glad that we ended up pivoting to the Kinetic.

You’ve created the Kinetic light, the world’s first motion reactive glove set. What exactly does this mean and how did you come up with the idea? 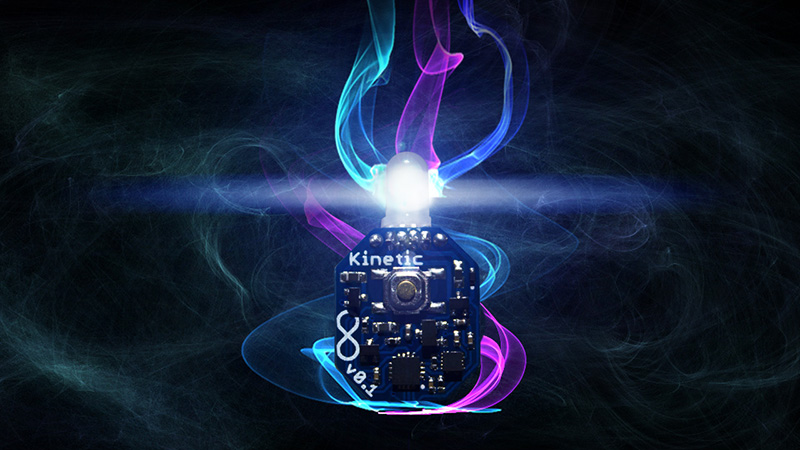 I first decided to do this whole project because, at the time, a lot of my friends were really into gloving and I just saw that the technology put into it was still kind of stone age technology. There wasn’t really any advancements or very ease of use ways of using them; the technology out there wasn’t in the 21st century and it wasn’t pushing any limits. After seeing that, I instantly thought of ways that you could improve and one of which, was to make it react to your movement. The current gloves have flash patterns, where they’ll just flash a specific pattern over and over again and that’s it. It doesn’t react to the user; it’s more of just a flashing light. It’s not interactive and that’s what the Kinetic does. It’s not just flashing lights anymore, it’s more like an instrument that you can play.

How does the Kinetic light differ from other standard lights in terms of visual effects, colors, modes and technology?

The modes and the reactivities are the biggest one. Our patent pending Accel technology allows the Kinetic to dynamically react to your movement because of how the built in accelerometer measures your motion and position. There are six modes with three mode control settings (Move to Front, Lock-In and Conjure) and each light has a button that allows you to easily switch between them.

The Move to Front feature allows users to rearrange their modes into any order they choose. The Lock-In feature lets you choose which modes you want to show or hide. The Conjure mode turns any one of your six modes into an on/off switch and is easy to navigate out of during a show without anyone knowing.

All of the modes are completely new and have never been done before. A mode is the way that the Kinetic either reacts to the motion, or the way in which the patterns are different; it’s how it’s structured differently. The Kinetic comes with six modes: four Accel and two Classic. Each of the Accel modes can be individually customized with up to three different colors to create mind-bending effects. The Classic modes are designed to give you the tools and technology to create any mode you want, using up to 12 individual colors. 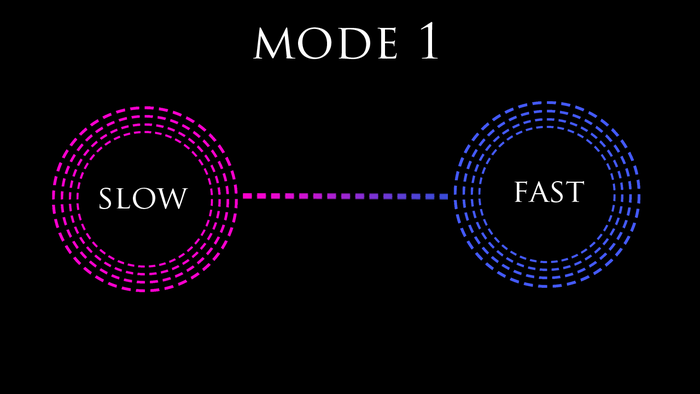 The first mode, called the Kinetic, reacts to your speed. You can actually see the speed of your flow. The colors change the faster you go. When you’re still or moving slowly, the first color will be strobed. As you go faster, the strobe fades into the second color. Faster still, and the second color fades into the third.

The second mode is called the Geo mode and it changes based on your angles. Tutter’s will love this one. When the Kinetic points up, it strobes the first color. As you tilt towards level, it fades into the second color. Dip below level and the second color fades into the third. If you only picked two colors, level will be an equal blend of the two colors chosen. As you move faster, the Kinetic will change into a three color strobe using the colors you chose. 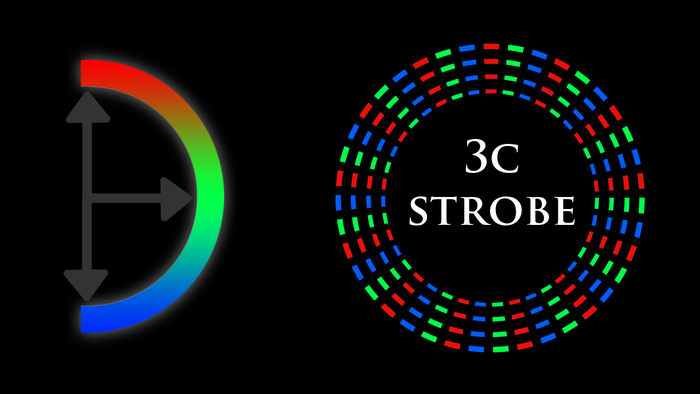 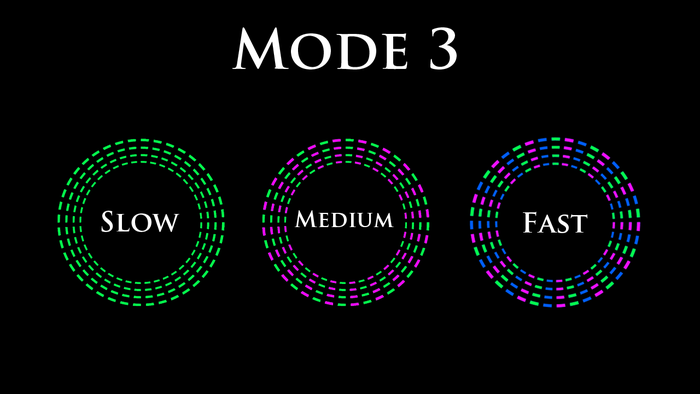 The Multi Mode is where the strobe gets more colors as your movement speeds up. When still or moving slowly, the first color selected is strobed. Go a bit faster and the second color is added. Faster still, and the third color (if there is one) is added to make a three-color strobe.

Then you have the Spectrum Mode. When still or moving slowly, the Kinetic gently fades through all the colors of the spectrum. Speed up, and it suddenly becomes a fast strobe of the three colors you’ve selected.

In our Sandbox modes, you can play around and create any mode you can think of or recreate any currently available mode. It basically allows you to recreate any other static mode that’s out there on the market in just this one mode. The Kinetic creates a quick ribbon of up to twelve colors of your choice with gaps wherever you select a blank. This allows you to recreate almost any strobe, ribbon, tracer, strobie, and more. With True Brightness Control, the power is truly in your hands to create anything you can think of! 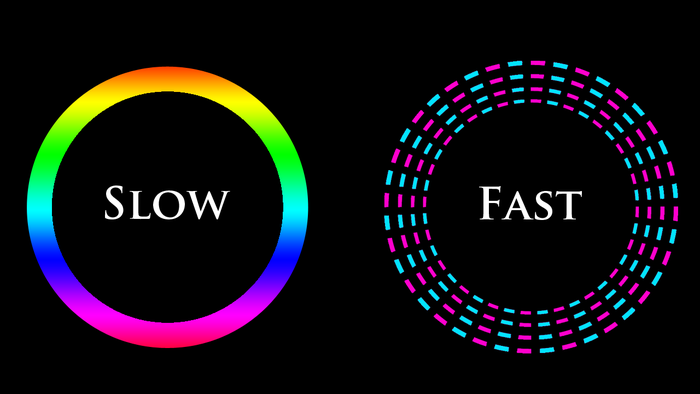 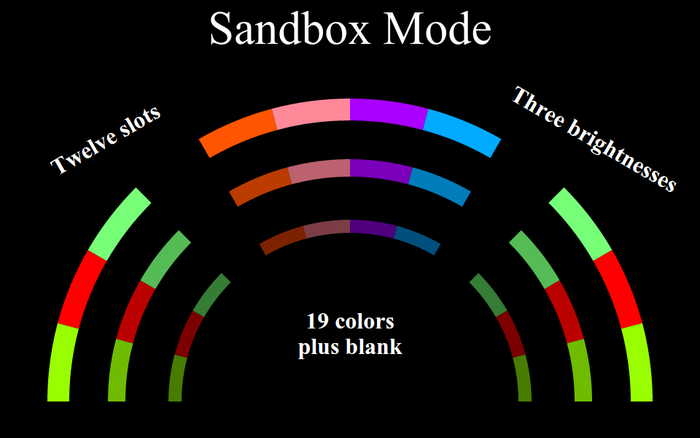 We also have some really good basic flash patterns, which are really gorgeous. There not motion reactive, but we wanted to add some of that into it as well, so you can get really customizable with it.

Another difference is the ease of use. We added a lot of really cool features to it, but we also made it really easy to implement and change those features around.

Our biggest competitors actually just came out with a version based on the Kinetic, which came out five months after we launched. Once we came out with the Kinetic, I guess they felt threatened, so they created their own. There product is actually different from ours. Depending on who you ask, it’s not as good in the sense of motion reactivity. Their product starts with a static flash pattern and then once you pass a certain speed threshold, it switches to another static flash pattern, based on how fast you’re moving, like a switch. I call it a motion switch. Whereas our product, reacts dynamically to motion. So, it’s off and then you move a little faster and it fades and changes colors. Regardless, our product is still different from anything else on the market.

How long does the Kinetic Light last before you have to change the batteries and how easy is it to do so? 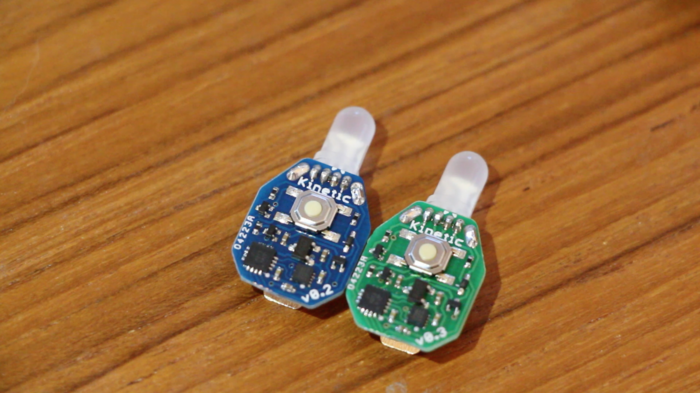 We’ve gotten a lot of reviews and feedback from our customers and all of them say that our product has, by far, the best battery life. Even our basic static lights last longer than other standard lights out there. We advertise that our battery life lasts about 15 hours, although customers have been telling us they last a lot longer than that. I’ve found some reports saying they’ve lasted for 22 hours. Now, I don’t know if these are legit tests or just based on how much they’ve used them over time and just kind of guessed, but these numbers are just coming from our user-base.

Changing the batteries is pretty easy, but like anything else, it requires a little bit of practice. Typically, you’ll take off the little diffuser that’s on it, which diffuses the light. On the back of the light, there’s a little opening. Push down on the LED itself until it pops out of the back. Then, you can take out the unit and replace the batteries. They use CR1620s.

Click here for more information and to purchase your own pair of Kinetic Gloves!