10 Feb A Force to be Reckoned with: Quintino’s Rise to the Top 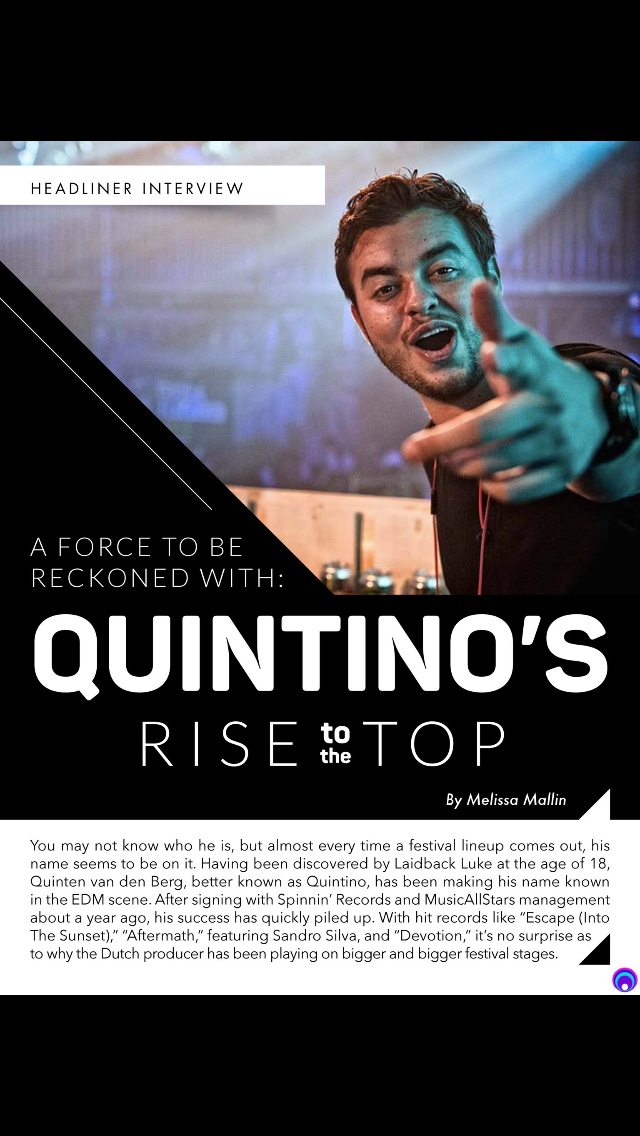 A Force to be Reckoned with: Quintino’s Rise to the Top
By Melissa Mallin

You may not know who he is, but almost every time a festival lineup comes out, his name seems to be on it. Having been discovered by Laidback Luke at the age of 18, Quinten van den Berg, better known as Quintino, has been making his name known in the EDM scene. After signing with Spinnin’ Records and MusicAllStars management about a year ago, his success has quickly piled up. With hit records like “Escape (Into The Sunset),” “Aftermath,” featuring Sandro Silva, and “Devotion,” it’s no surprise as to why the Dutch producer has been playing on bigger and bigger festival stages.

Growing up in a musical family, Quintino was blessed with talent and a broad musical influence. With the help of his mentor, Laidback Luke, Quintino has quickly evolved into one of the biggest names in the scene. His big break came in 2009, when he released a remix of Cidinho & Doca’s “Rap Das Armas,” which became a worldwide summer anthem and received over 10 million hits on YouTube. From there, he teamed up with Sandro Silva to release “Epic,” which entered the top five of the Beatport Top 100 and hit the #1 position on the Dutch charts. Now, he has many track successes under his belt and has played at almost every major music festival in the world. According to The DJ List, when he’s not producing and making tracks, Quintino performs worldwide with an estimate of 250 gigs a year.

I caught up with Quintino at EDC Orlando to talk about his relationship with Laidback Luke, his musical background and delve more into his music.

Laidback Luke discovered you at the age of 18. In your opinion, what do you think were some of the things that attracted him to you and your music? (In other words, why do you think he chose you and not someone else?)

I actually had an interview about a month ago and it was a really in-depth interview. There was a two-hour video where they showed old footage and stuff. There was an interview with Laidback Luke where he said, “I was like a younger version of him and he really liked what I was playing.” So, for me, it was really cool to see and hear that.

Not only did Laidback Luke discover you, but he’s also your mentor. Can you tell us about what your relationship is like? Do you have any funny or interesting stories you could share with us?

We started together when I was nothing. From day one, he helped me create music and my first records and walked me through the baby steps. I went with him to all the shows, big and small. And, I don’t know; I’ve seen it all. He helped further my career by making me work harder. I’m dedicated to music and it’s all because of Luke.

Your bio says you were born into a musical family. Can you tell us a little more about your family and how having a musical background helped you become who you are today?

On my mom’s side, they all play piano. I didn’t do it though, but I was listening to it all the time. My dad had like a drive-in DJ show and he was always into Funk and stuff, so I really like Funk music. So, yeah, growing up, I was always influenced by music.

I decided to create my own radio show because for me, the sets I play are different from the music I sometimes like or can play. So, I wanted to show music that I really like, but can’t always play at festivals or clubs. I wanted to show a different side of me. Also, there’s a lot of young, new talent out there and I always try to put that in my radio show because there’s a lot of talent in the world. I listen to my demo drop account and I always put the best demo in my show every week.

You recently released “Scorpion,” with Hardwell, who edited the track. How does an “edit” track work exactly? Can you tell us a little more about the production and what went into making the track?
Basically, I sent the record to him and he really liked it and just wanted to work with the mastering and chop things up a little bit; creating a little bit of a different vibe. So, the original became an edit. After I finished the record, he wanted to edit some stuff and basically, take the track from 99 percent to 100.