01 Sep Up and Coming: Get To Know The Married Duo Arius 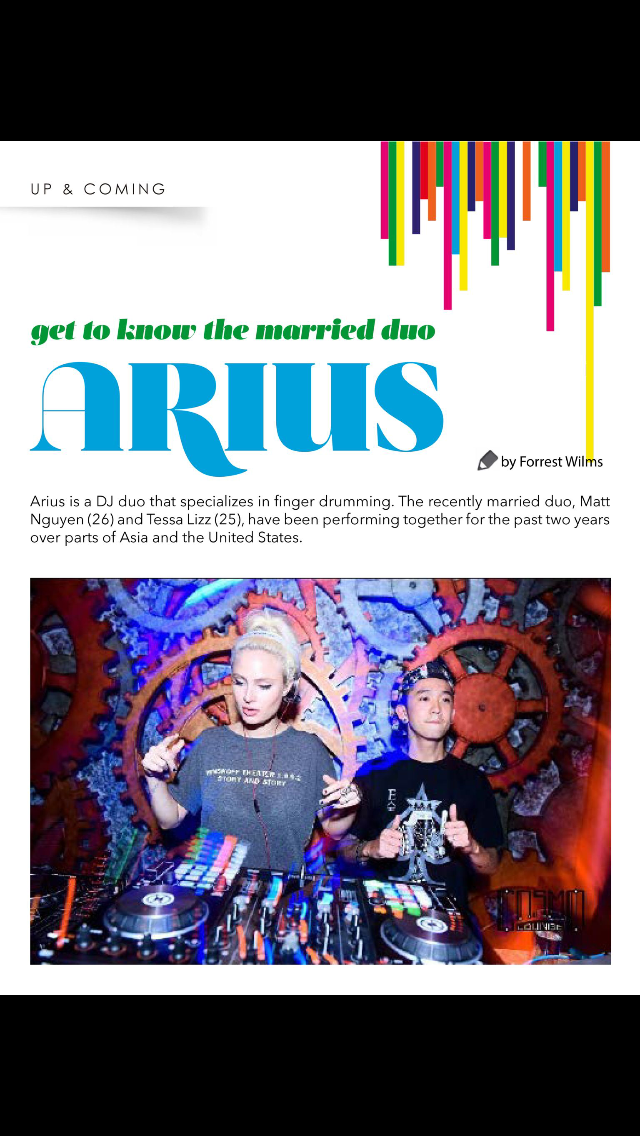 The History of Arius

Arius is a DJ duo that specializes in finger drumming. The recently married duo, Matt Nguyen and Tessa Lizz, have been performing together for the past few years over parts of Asia and the United States.

Nguyen (more commonly known as Dumbo) began performing live with ‘Poreotics’ dance group– champions of the 5th season of America’s Best Dance Crew. Dumbo and Lizz met four and a half years ago at the magical EDC festival in Las Vegas. A relationship that started in the crowd has pushed them up on stage in front of thousands of people.

As Dumbo’s curiosity for music production grew, he decided to hang up his ‘Poreotics’ shoes and work on becoming a full-time DJ. He then pushed his wife to try her hand at it… literally. Before Lizz got involved in performing, she was a cocktail waitress at Marquee and Daylight in Las Vegas, serving the big time DJ’s. Little did they know that very soon, things would take a turn. Finger drumming came naturally to Lizz and since then, the pair have released several originals and remixes, as well as producing much more that is expected to be released soon.

While living in Vietnam, Arius had been working on music production, perfecting their craft and making some waves in the bass community. Excision, a hardcore DJ known for putting together crazy drops with high intensity and speed, recently shared a video from Lizz, remixing one of his most popular songs, “X Up” featuring Messinian. When asked about how she felt the first time she saw that he’d shared her video, Lizz said that she was so happy, she started to cry.

“It feels really good to have an artist that you look up to so much shout out your work. It was awesome sharing it with the bass fans because that’s what they like. This exposure definitely attracted a lot of attention from fans on social media,” said Lizz.

Setting Themselves Apart From The Competition

Finger drumming is a rare skill in the EDM community and having someone like Lizz on the drumming kit and Dumbo alongside busting out some sick dance moves, provides a new experience for fans, rather than just having a DJ spin records.

Putting Lizz on the drum machine was actually Dumbo’s idea.

“It was originally our vision, to begin with. As a performer, you don’t need two people on the decks. It’s so normal for a guy to finger drum, so I pushed her to learn how because I wanted to focus more on the production side,” said Dumbo.

After being on the kit for about eight months, Tessa explained how she spent every day learning new things and improving her techniques. She’s learned how to produce her own music and play it back on the finger drumming set using a device called Maschine by Traktor.

The two have big plans for the upcoming year. Currently, they are working on booking festivals, playing at club events and looking to find an audience where they can drop their brand new music for fans who will love it the most– true bass heads.

What is your favorite track from Arius? Swipe up to comment below and let me know!