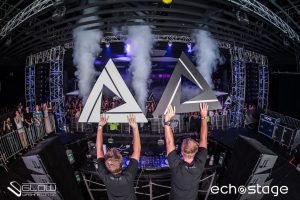 The 10 Years of Enhanced Tour will feature Chad Cisneros and Dave Reed of Tritonal performing in intimate venues across North America. The tour kicks off in April with shows in Vancouver, San Francisco, Portland, Boston, San Diego and more.

This past fall, the duo had a series of sold-out shows in large venues. However, for this tour, they wanted a more connected feeling with the audience. Going back to their beginnings, they will be performing at nightclubs while also showcasing some of their up-and-coming talents to be released on their Enhanced label.

With 10 years under their belt, Enhanced Music has launched careers and created headliners. Enhanced was behind the discovery and cultivation of artists like Arty, Audien, and BRKLYN, whilst giving other acts such as Disco Fries, Madison Mars, and Felix Cartal the tools and platform to boom. Before there was a label, there was the group. Forming in 2008, Tritonal played major festivals, sold out their own headlining shows and charted six top 10 Billboard dance singles.

Tickets went on sale Friday, February 16th. Click here to purchase your tickets today! We also have included the Enhanced Spotify playlist just for you. Get ready for the tour this summer by jamming to a playlist full of the great music you will surely catch at the 10 Years of Enhanced Tour.

Are you interested in seeing Tritonal and friends tour this Spring? Swipe up to drop a comment below and let me know what’s up!