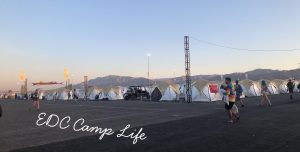 Pasquale Rotella, in a surprise announcement earlier this year, revealed that camping will be an option for headliners for the 2018 festival. The addition of Camp EDC not only added more events and shows to the lineup, but it provided affordable accommodations for those who can’t afford to stay on the Las Vegas Strip.

Check-in began early on Thursday morning. The first daytime pool party was scheduled to begin at noon, and the Kickoff Party was at 8 pm. Check-in for Camp EDC continued until 2 am, and the extended time was necessary.

My group of three decided to camp with an RV. We arrived in Vegas at 3:30 pm, and it turns out it was peak pick-up time. Registration for the RV was a three-hour wait. We decided to check out the iHeart pop-up shop at the Luxor, grab a bite to eat, and grocery shop. Finally, with our RV in tow, we arrived at the Motor Speedway at 10 pm with a completed check-in to the campsite sometime after 2 am.

Tip: Arrive in Vegas on Wednesday or very early on Thursday morning. We missed both the Bassrush pool party and the Kickoff party due to late registrations.

I spent Friday morning exploring the campgrounds. Camp EDC was divided by the main road, 23rd street. To find your home, you relied on the numbered roads which ran from the festival entrance to the end of Camp EDC and the named streets which ran left to right. I was lucky my RV was right on the 23rd and Awaken, which was easily accessible to everything.

As you travel down the main road walking toward the Mesa (closest to the festal entrance), to your right were the standard camp tents: Saphire, Citrine, Amethyst, and Moonstone. Each tent-hood was color-coded to help easily identify your location. To the left were the RVs and the VIP tent Desert Rose. At the center of camp life was the Mesa.

Tip: Bring a totem or decorations so you can easily identify your tent amongst the sea of silver shift pods.

Camp EDC had a separate entrance which allowed for authorized headliners to return. A yellow wristband designated you as a camper, which had to be shown to security before entering. The walk to and from Camp EDC to the festival entrance was extremely short and easy to navigate. The walkways were lit at night and you always felt safe with on-site security at different checkpoints. There was also ground control staff who were there to make sure everyone was safe.

As promised, there was a daily schedule of activities. Every morning at 6 am, as we returned from the EDC festival gates, headliners were greeted with the announcement of an after party held at the Parliament Art car. I went on Sunday morning, and the DJ was good. Somehow the crowd was still jumping even after two days of the EDC festival and three days at camp.

Each afternoon, the pool parties were cranking. Two waist-high pools were available with a DJ in the center. Lifeguards stood on duty for safety. I was at the Mesa all day Sunday and was under the Cascada tent resting in the shade when the Brownies & Lemonade party began. Since I hadn’t slept yet, I decided to go back to the RV. Little did I know, Ghastly was the surprise guest, at least that’s what I was told. I almost died at hearing that rumor.

Tip: Take power naps and check in on each party, especially those that announce a special guest. Insomniac did a bomb job of bringing in some of the hottest special guests this weekend, and I missed Ghastly because I did not time my nap correctly. Download the EDC app and allow push notifications so you don’t miss a step.

The food court, which is what I referred to the corner of food stands available in the Mesa, had picnic tables surrounded by misting fans to keep everyone cool while they munched down. The prices were expensive, as expected; the average plate cost between $12-$30, which is comparable to prices on the strip. I enjoyed the breakfast pizza, chicken and fries, the hand-made lemonade stand, and the smoothie stand. Often times, the food vendors were not well-equipped to handle the crowd. Several stands ran out of menu options throughout the weekend. That was frustrating since many of us were depending on the food provided.

Tip: Grocery shop before heading to Camp EDC. Non-perishable foods and a can opener go a long way. I even saw the savvy campers bring an electric grill for hot dogs. You can purchase bags of ice at the general store to keep food chilled in a cooler.

I was lucky that I did not have to worry about the restroom issues. From the rumblings I heard, it was not a great situation. The organizers decided to use port-a-potties. I could hear girls complaining that the pots were full. There also did not seem to be great placements of the restrooms. The restrooms located off the main road smelled awful daily, which made for an unpleasant walk to and from the Mesa.

There stood one building with plumbing, which was located at the Mesa. Those restrooms remained rather clean, and that was a plus. I would suggest a more frequent restocking of supplies. There were days the bathroom was totally out of toilet paper.

Tip: Bring your own moist wipes. They act as toilet paper and will clean your hands in instances when there is no water available.

The lines for the showers were outrageous. On Friday, I noticed an extremely long line for the showers. When I asked someone what was happening, I was told there was an issue with the water. The lines must not have improved because by Saturday people were showering at the water refill stations meant to be used for consumption.

I experienced the showering debacle firsthand since a friend, who stayed in the Desert Rose VIP tents, gave us access to the VIP showers. You had to have a pink wristband to enter, as they had their own private showers and toilets. Don’t tell anyone, but our friend snuck us in so we could take a nice shower. We waited in the women’s line for about 45-minutes. Meanwhile, the men were in and out.

As a rookie RV camper, we ran into an unexpected issue by Saturday evening. Our 20-gallon tank had run out. We quickly learned THAT to refill the water tank we had to purchase an $80 voucher at the camp’s general store. You could also purchase vouchers to empty the waste tanks. With three people over four days, we used 40 gallons of water. We filled our gray water tank and only filled 2/3 of the black water tank. If you are camping with eight people, plan accordingly.

Tip: If you have an RV, you can opt to use the showers and the restrooms on site to save money . However, if you can afford it, using your on-board facilities saves a whole lot of time, and you can always count on them being clean. 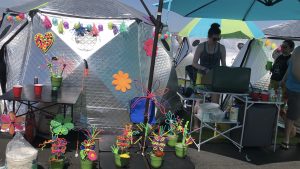 Overall, the camping experience was unique. I would not trade it for the world. The most beneficial feature was the time and money saved by eliminating travel to and from the festival. Keep in mind, there are many comforts and luxuries that you forfeit when you choose to camp as opposed to booking a hotel. Be sure you are fit for the challenges of shared restrooms and limited food options. If you believe you can tough it out, Camp EDC is hella fun, and the feel of the community is awesome.

Do you enjoy camping at festivals? Swipe up to comment and let me know about your camping experiences at music festivals!