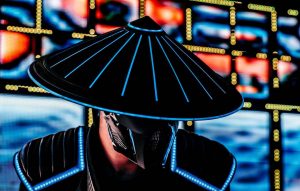 Datsik has that Firepower

Datsik, whose actual name is Troy Beetles, is the owner and founder of Firepower Records, an independent label responsible for releasing his most recent EP releases Down 4 My Ninjas (2015), Sensei, and Darkstar (2016). The ninja artist is known for his unique, keep-you-on-your-toes, beat-switching, hip-hop influence on the bass EDM scene. He got his start in 2007 dabbling in hip-hop and dubstep productions. In 2008, things really became spicy when he began working with dubstep great Excision. From there, their collabs on Rottun Recordings would lead to Datsik’s skyrocketing solo career.

The North American dubstep sound is shaped by contributions made by both Datsik and Excision. The show in Washington, D.C. left no doubts about the power and lure Datsik holds over the bass community. The sold-out ticket sales were the first testament. There was not an open spot on the floor in this standing room only venue; people were spilling out into the entryway.

A well-equipped Ninja Nation crew turned the crowd hot and ready for Datsik to enter the stage. Sullivan King rocked the stage with his rock and roll style, a sound that has taken a back seat to the hip-hop influences. His presence was a refreshing beginning to the show. Standing tall with electrifying energy, King climbed atop the subwoofers to headbang with the crowd with 16 inches of long, flowing rockstar hair. Every few songs he grabbed his electric guitar and filled the rafters with live music. The crowd went insane for his lively antics.

Another anticipated set was Riot Ten and Space Jesus, who are not lightweights in the scene by any means. They each hold their own when performing at festivals around the nation. They were essentially an added bonus, headliners within a headliner. Some attendees had even mentioned that they were there to see Space Jesus just as much as they were there for Datsik.

Of course, for the majority of the show, the ninja-inspired Datsik was the glory. A disappointing aspect was the long delay between Space Jesus and Datsik entering the stage. There were probably approximately 10 to 15 minutes between sets. This is disappointing since the first four acts did so much to get the crowd hyped only to have their bones grow cold and weary because of the wait. It was a common consensus that if the delay was going to be so long, Space Jesus could have continued playing. 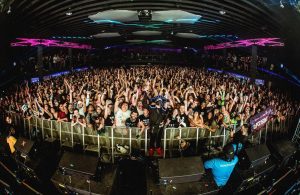 However, despite Datsik being a show stopper, his performance did not disappoint, and he became the showstopper. Whatever the reason for the delay, all was forgotten once the lights grew bright and the bass screamed from the surround-sound. Fans whipped out their infamous Datsik flags and swayed in support. Others dressed the part resembling the DJ/video gamer’s ninja persona. Playing until close, Datsik left the entire room smiling. The long lines for coat check were not even noticed as fans selfied and chatted amongst themselves, describing their favorite parts of the show.

Datsik and the Ninja Nation Tour continue on with the next show in Montana tomorrow, February 13, 2018. They travel on and play for five days straight. You have plenty of time and opportunity, what are you waiting for? To purchase tickets in a city near you, click here.

Were you at Datsik’s Ninja Nation Tour in your city?

Swipe up to leave a comment telling us about your Ninja Nation experience and tag the ninjas you kicked it with at the show.