Posted at 16:33h in Magazine by Denice 0 Comments
0 Likes
Share 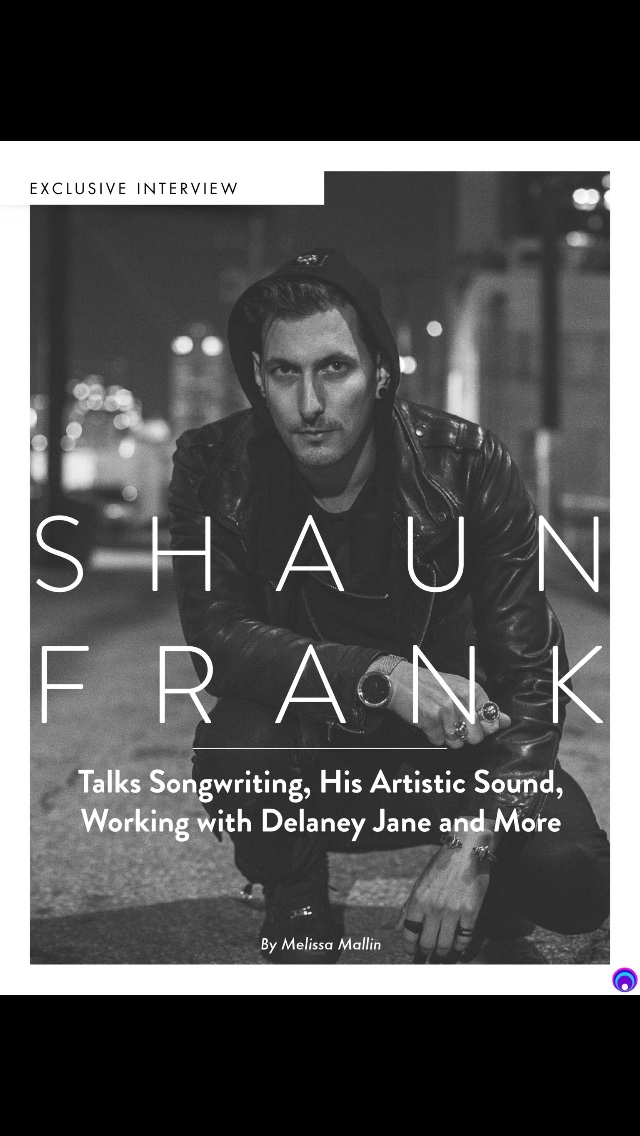 Over the past year, Shaun Frank has been transitioning himself into the world of EDM. Based out of Toronto, the extremely talented musician, producer and songwriter focuses on writing memorable melodies and timeless lyrics while putting a tremendous amount of passion into his productions. While his perspective is far more intimate than most other DJ’s in the industry, Frank is not solely concerned with making music that sells, but songs that stick to the soul and resonate with fans by way of vocal-driven grooves. His signature style involves high-energy elements of Deep House and old UK Garage, accompanied by strong lyrical work with a vocal focus. With tracks like “This Could Be Love,” feat. Borgeous and Delaney Jane, “Shades of Grey,” with Oliver Heldens and Delaney Jane and his latest single, “Heaven” feat. KSHMR and Delaney Jane, you’re bound to have at least one of his lyrics and/or melodies stuck in your head.

I was able to catch up with the ever-so humble, down-to-earth and strikingly handsome producer when he arrived in Miami to open for Adventure Club. His outgoing and energetic personality made him easy to get along with and relate too. He’s someone who puts his entire heart and soul into the lyrics and melodies of his music. Having already toured all four corners of the globe, his international experience has given him the charisma of a very skilled performer, the experience of a “wise, old man” (even though he’s only 25), and the soul of someone who only wants to change the world by sending a positive message through music.

Hi Shaun. Can you tell our readers a little about yourself, how you got into music and some background information?

Helloooo iPhone! I’m from Toronto. I’ve been making music for as long as I can remember. I’ve been playing the piano since I was 4-years-old and my parents always had me in music. I grew up playing music in high school, played in a bunch of bands and went on tour with some of them. Eventually, I bought a laptop and started producing, which has led me to where I am now.

I was actually a singer before I started producing House music. That’s what kind of got me into this; I was singing on dance records. Then I realized, I didn’t just want to be a singer; I wanted to be an artist and make all of my own music from start to finish, so that’s kind of how it all came to be.

Yeah, I remember seeing like “whoever” featuring Shaun Frank.

Yeah, that was like way back. That’s kind of how it began. I think a few producers found my voice through my bands. I went on tour actually in Europe and I was singing and realized I wanted to be the main act and make my own music. I had always been producing, so it just seemed like the right next step.

You’re currently on tour with Adventure Club. How’s the tour been going and can you give us any memorable / funny moments about the tour so far?

Well, I actually just got here, but I’ve known these guys for a little while. I’ve been a huge supporter of Leighton and Christian of Adventure Club. I actually helped write the vocal on their single, “Limitless” with Delaney Jane. So, that’s exciting. We bonded on a musical level and now we’ll be bonding on a touring level, which is dope. I’m definitely excited and looking forward to it.

You played at TomorrowWorld. Sorry, but I have to ask what your opinion is on the whole TW nightmare and fiasco? As an artist, were the “bad weather” conditions just as much of an issue for you as it was for fans? Please be honest.

Well, I actually played in the dead of the rain. I got it the worst of anyone really, set time wise. Doors didn’t open until late due to the rain and stuff, but it was still awesome! A lot of people from my hometown were there along with a lot of fans, so it was a really awesome experience. I really appreciated the support from the people who came out in the rain; that was so sick.

I didn’t find out about the crazy things that happened until the next day, so I can’t really speculate as to whether TomorrowWorld was at fault or not. I know a lot of people are blaming the festival for not being prepared, but I really don’t know. I mean yeah, when you have 80,000 people in a location, you have to be ready for anything. I guess they just didn’t know how damaging the rain could be.

I’d like to give them the benefit of the doubt though; everyone I worked with at the festival was awesome. They were so great to me. I was actually a late addition to the festival too, but everyone I met was awesome and I would never say anything bad about the festival. They were rad and it was a great experience and I hope to do more with them. I hope that everything gets resolved and I really hope that nobody was hurt. I don’t know if anybody was, but I really hope they weren’t.