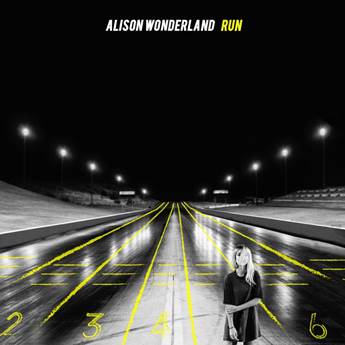 One of Australia’s fastest rising young female musicians and producers, Alison Wonderland, has just released her long anticipated debut album “Run” via Astralwerks and it’s absolutely epic! Never one to disappoint, Wonderland’s full-length LP features hits “U Don’t Know,” “I Want U,” and “Run.” The album title and lead track “Run” stands out with its searing, razor-sharp synths and thundering bass while the clattering, drum-clap infused “U Don’t Know” features ghostly call-and-response echoes from the The Flaming Lips far-out front man Wayne Coyne. And, lets not forget the creepily chilling music video to go along with “I Want U.”

The twelve-track LP properly introduces Wonderland’s distinct production techniques—a signature sound that has cemented her steady ascent into the mainstream scene. “Run” showcases a robust rolodex of guest collaborators from both sides of the equator including Djemba Djemba, known for his work with Diplo’s MAD DECENT label and cutting edge up and coming producers from around the world such as AWE, Lido, and Ganz. New York rapper Johnny Nelson, SAFIA’s Ben Woolner, Alexander Burnett, BRAVE, as well as formerly mentioned Flaming Lips impresario Wayne Coyne are also included.

Aside from co-producing, Wonderland sings on almost every track. A labor of love, what is heard and felt when listening to the album is Wonderland’s dedication and very real inability to sit still. “I always feel like I’m never satisfied,” said Wonderland. “When I get to a certain place, I’m still not content. It’s really about pushing yourself.”

“Run” serves as the follow-up to Wonderland’s acclaimed 2014 debut EP “Calm Down,” which features the No.1 Hypemachine track “I Want U,” which SPIN declared a “chemically trappy anthem that crackles with self-awareness.” Additionally, VICE’s Thump praised “Calm Down,” proclaiming the EP showcases “Wonderland’s starlight soprano and propensity for heavy bass to the delightfully addictive effect.”

Wonderland brings an extensive musical background to her next-level productions and sets. The prodigious talent began her career as a principal cellist in the Sydney Youth Orchestra and played bass in an indie rock band as a teen before discovering electronic music and teaching herself the art of production and DJing. Her tough, streetwise, of-the-moment sound has caught the ear of both young music fans and uber-tastemakers like Annie Mac and Diplo, who featured her DJ set on his BBC Radio 1 show. The Sydney-based artist has built a devoted following across her homeland, selling more than 10,000 tickets of her innovative Australian warehouse tour, dubbed the “Wonderland Warehouse Project,”  as well as releasing cutting edge videos, and winning fans over with her original productions and masterful skills behind the decks.

Running the gamut from electronica, future beats, trap, and dancehall to classical and pop music, “Run” comes just days before Wonderland’s U.S. debut at Coachella, where she will introduce her fierce live show that’s reminiscent of her famous Australian warehouse parties. Following Coachella, Wonderland will take on a stint of live dates across North America to markets including New York, Chicago, Miami, Seattle and Toronto. Additionally, Wonderland is confirmed for Lollapalooza, Mad Decent Boat Party, Firefly Music Festival, and Electric Forest. Be sure to catch one of Wonderland’s epic performances and see below for additional tour dates!