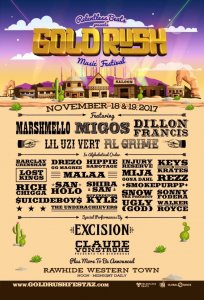 Relentless Beats and friends strike gold with the release of the complete 2017 lineup for their inaugural Goldrush music festival event. They decided to switch it up by introducing a fresh new concept and taking us back in time to the 1880s. More specifically, the wild wild west. Come on and mosey on over to the wild side as EDM’s and Hip Hop’s most wanted causes a raucous at the Rawhide Western Town entertainment venue in Chandler, Arizona.

The lineup for this two-day event, held on November 18 & 19, includes the first time ever b2b appearance of A-Trak with Baauer and a special 2 hour set featuring the online radio show In the MOOD’s very own Nicole Moudaber. In addition to special performances by Excision and Claude VonStroke. 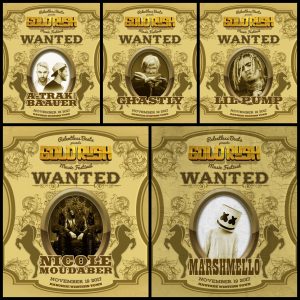 Relentless Beats has hosted several other events at this venue, including the Global Dance Festival, BOO! and Decadence, probably because of its large green acreage, stunning water views and duh, the fact that it’s only 20 minutes away from the Phoenix Sky Harbor International airport. 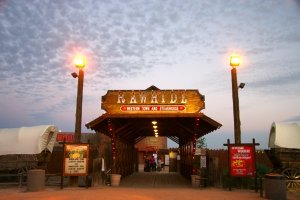 Tickets for Goldrush Music Festival are on sale now*!!

*All listed prices are before fees; Goldrush is an event for all ages. Fans under the age of 18 must be accompanied by an adult
**Must be 21 and older

Ready to pull up ya britches and make your way to GoldRush for a weekend?
For more information click here or visit them on social media: