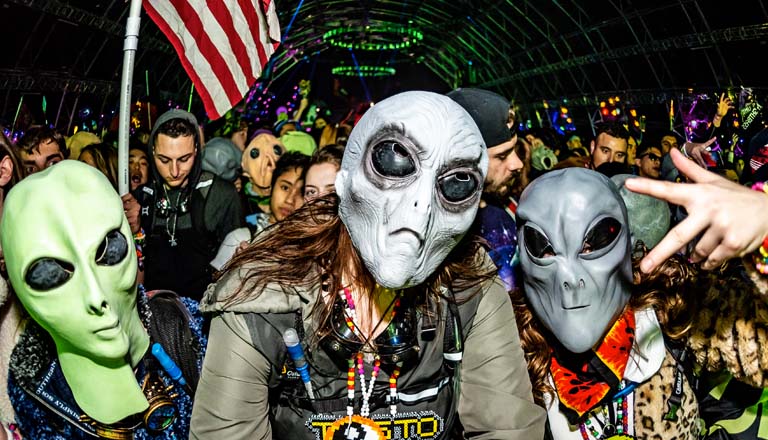 This year’s ball-drop was full of sensational music and exotic crowds thanks to Orlando Invasion. The two-day festival made my New Year’s tower over my previous end-of-year celebrations. I was excited to check out the artists I recommended in my previous post which you can read by clicking here now.

Orlando Invasion is a brand new festival brought to us by Pasquella Rotella (CEO) and his team of masterminds behind Insomniac Events. The prominent EDM company describes the festival on its website. It invites EDM lovers from around the globe to:

“Join us this New Year’s as we probe the deepest mysteries of the cosmos and unlock the secrets of the universe through sonic vibration and movement. Discover a world inhabited by celestial beings and alien technology, where intergalactic frequencies can be detected at every turn. Perhaps we are not alone after all.”

There was a huge lot for guests to park that cost 20 dollars (cash only). Some of the smarter attendees chose to park down the street at gas stations or nearby street parking. I drove both days and parked in the employee parking lot where the rest of the media team was located.

I could not have asked for a better weekend of weather at Orlando Invasion. Mild temperatures carried through the first day and I did not feel cold once in my Ganja White Night jersey and alien shorts. The second day was sunny and hot until around 4 PM when it started to cool down. The heat was not too overbearing so I danced around plenty without breaking a sweat.

Orlando Invasion offered a considerably cheap price to see your favorite artists for New Year’s Eve and Day. The three tickets available were general admission, VIP, and SkyDeck. The general admission required that you be 18 or older to purchase.

VIP tickets were only accessible if you are 21 or older. The increased price reflected private viewing zones, gourmet food options, air-conditioned bathrooms, and exclusive entry lanes. SkyDeck wristbands gave you and your group a private table in addition to all of the features offered from VIP tickets.

Entering the venue was extremely straightforward: one row of gates located in front of the parking lot. Festivalgoers poured in throughout the day with ease and the wait was always shorter than five minutes. It was no surprise to see that exit was even easier. Due to the smaller size of the venue when compared to festivals like Electric Daisy Carnival, there were no attendee pileups either night upon leaving.

Differing from the standard festival, Orlando Invasion had actual bathrooms instead of portapotties. This made that part of the experience a lot more enjoyable and a lot less smelly. There were two adjoined water stations right next to one of the bathrooms.

Along with a myriad of bars dispersed across the venue, there was a bunch of food options to choose from. I even saw a food truck that served chicken and waffles, which I deeply regret not going to. It was reassuring to see that the venue had a big first-aid tent and a lost and found too.

The Orlando Amphitheatre’s layout was fairly simple, with three stages that formed a triangle with an open space in the middle. While the Twilight Zone was a warehouse, the Mothership (main stage) and Nebula stages were both outside and looked very similar (with the exception of the area designated for the crowd). If you happened to get lost at all, you might need to practice your directional skills because each stage was basically in sight of each other.

After checking into our hotel, we arrived at Orlando Invasion around 6:30 PM. I was relieved that we got there in time to see KREAM, one of my favorite house duos. As we walked closer to the stage I heard the echoes of their remix to MEDUZA’s “Tell It To My Heart”.

Following KREAM’s set, we saw Biscits in the Twilight Zone. We wandered through the open doors into a thick layer of fog. The stage, DJ, and ravers all around us were silhouettes in the heavy haze. We high-stepped to a couple of tech-house tracks but made sure we left before the end to witness the opening of Deorro’s set at the Mothership. 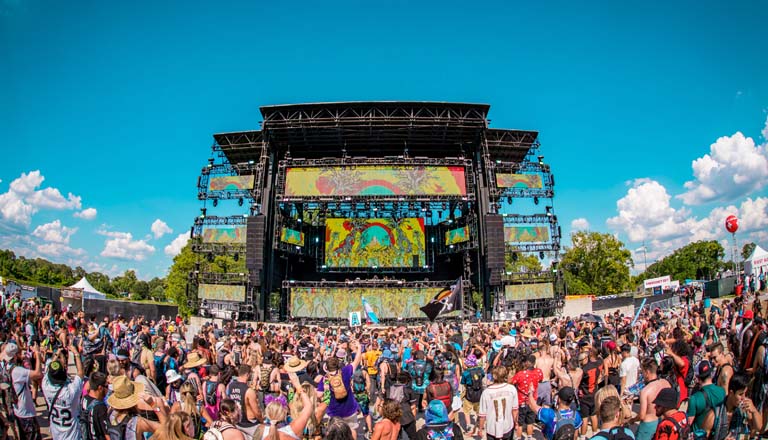 Deorro blessed the crowd with Latin anthems consistently during his set. Each one blended seamlessly into the next. My girlfriend did an amazing bachata dance while I tragically failed to mimic her.

We saw some pieces of some other sets before ending up back at the Mothership for Flosstradamus b3b Nitti Gritti b3b Valentino Khan. This was a back to back to back set that assaulted the crowd with hard dubstep.

To finish out the night we went to Eli Brown in the Twilight Zone. His music synchronized with the name of the stage, putting the audience in a trance. Eli Brown’s deep techno made the metal walls of the building shake. The sounds made me think Eli Brown had Star Trek beamed us to another planet.

Finally, we headed to the main stage for Deadmau5 vs. Testpilot. Even though his techno was infectious, we were completely exhausted and took off early to rest up for the second day.

If you start asking yourself why this day seems to be so much longer than the first, know that it truly felt like that. Every act we went to was phenomenal and brought something new to the table. We pulled into the venue at 4:30 PM so we could see the entirety of GATTÜSO’s set. I was caught off guard by the preceding act: Adam Auburn. The tech-house grooves he played readied the crowd for GATTÜSO.

As the audience grew larger, GATTÜSO played a variety of deep house and Brazilian Bass anthems. His energy was contagious and he moved across the stage to hype up the left and right sides of the crowd. Next, we trekked over to the Nebula stage to meet up with some friends.

We instantly saw the dense pack of ravers bouncing up and down to the riddim played by Versa. Riddim has grown a lot on me since being introduced to it last year. Versa did an outstanding job of growing my affinity for it even more.

I found my friend halfway through his set when I spotted his pink-haired tiki head totem. It was great to catch up with him after not seeing him since playing on the same hockey team growing up in New York.

After Versa convinced us to stay at Nebula, we were fortunate to be in the presence of Jessica Audifredd. Her ear-deafening bass drops were accompanied by jaw drops from the crowd. A blue anime version of Jessica Audifredd flew across the screen while swinging a sword to the beat of every riddim track. I was basically a Mexican jumping bean that had been possessed by the bass.

While panting, I realized I needed a break from riddim and decided to turn back to house music. Wax Motif complimented this desire at the Mothership stage. He had the optimal balance of brostep and bass house throughout his set.

Zhu was easily my favorite set of the weekend. To be honest it was not even close. His talents aligned with his deliberately executed sets has no boundaries. A pixelated warning sign flashed on the screen and red spotlights darted through the night sky.

The opening to the set was nothing short of perfection. Resonating bass kicked into the tune of  “Lost It” off his new album Dreamland 2021. At different points during his set, he played the synthesizer keyboard majestically. He also put his extraordinary voice on display for us.

Post-Zhu we took a 180 and ended up at Kai Wachi. He controlled the energy; the atmosphere was fast-paced and aggressive. Afterward, we beelined it to the Twilight Zone for CID. It was my first time seeing the tech-house technician and I was not disappointed. I clutched onto the rail while dancing like a maniac to tracks such as “Duro” and “Jumpin'”.

We left CID around 10:40 PM to catch the end of Funtcase b2b Doctor P at the Nebula stage. Is it a hot take to say they were the most underrated act of the weekend? Absolutely. But I stand by it. Although, I might be biased based on my passion for wubz and dubstep, which they were remarkably proficient in.

Our last hour at the festival was split during Sullivan King and Slander. Sullivan King’s intro was straight out of a horror movie. His raspy screams rang out, “ORLANDOOOO! Who the fuck is ready to rage tonight!” This was proceeded by a video showing the outline of a face in a hellish fire. The video was overlapped by the robotic voice from The Purge welcoming us to strap into the “Hyperrail”, for a rollercoaster ride full of dubstep.

At the end of the monologue, “We wish you the best of luck” was put on a loop that tied into his first track. Sullivan King wasted no time hyping up the crowd and dropping haymakers of bass onto us. He played the guitar as if it was his last chance to hold the electric shred machine. We fed off of his intensity like a starving pack of wolves.

To close out the weekend, we sat at the back of the Mothership stage for SLANDER. The duo played a mix of hardstyle, future bass, and dubstep. Their celestial set was the prime way to wrap up the first-ever Orlando Invasion. With its booming success, get ready to see the festival return next year for another supernatural experience.

Did you attend Orlando Invasion? Who was your favorite performance? Swipe up to comment below and let me know.