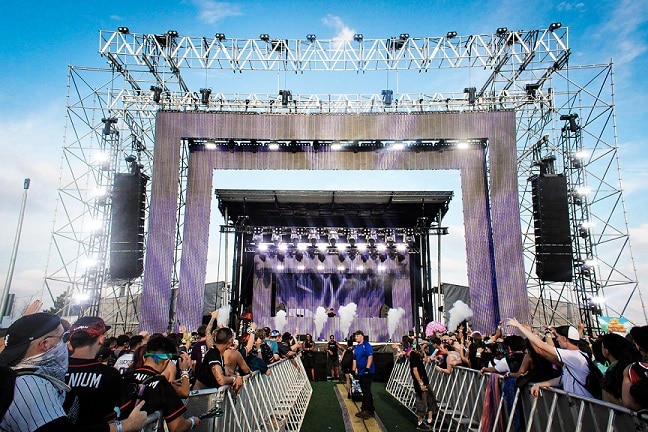 Each day the festival opened with some Deep House Yoga with Alissa Jo at 2:00 pm. The main stage was in the stadium where fest-goers could dance on the massive playing field or watch from the stands. In addition to the main stage, there were also five more stages outside.

Before heading out, I made sure to download the North Coast Music Festival (NCMF) app. The app was such a game changer and a great tool for me to use to navigate the festival. It included the most important thing, the lineup schedule, which allowed me to favorite sets so I could create a schedule to plan the acts I wanted to see.

It also had a map of the grounds, which showed symbols for where everything was located. This included everything from the stages to the vendors and to the EMS tent. Overall this was very useful!

Entry to the festival was well organized and filled with plenty of staff to direct cars and answer any questions if needed. The line for box office tickets moved fast. Every window was open and a guy was directing the people on which window to go. This moved the line alone quickly. After that, the line was even shorter for the security bag check and the ever-fun pat down.

As for the weather goes, the conditions were perfect! There was some rain on Sunday morning, but overall the days were full of sunshine and warm temperatures. The night was a little cooler, but I did not need a sweater.

North Coast Music Festival has been in several locations over the years but has been calling Seatgeek Stadium home since 2021. Inside the festival and around the grounds were vendors, portapotties, and food and beverage vendors spread throughout.
Across the festival grounds were six stages. 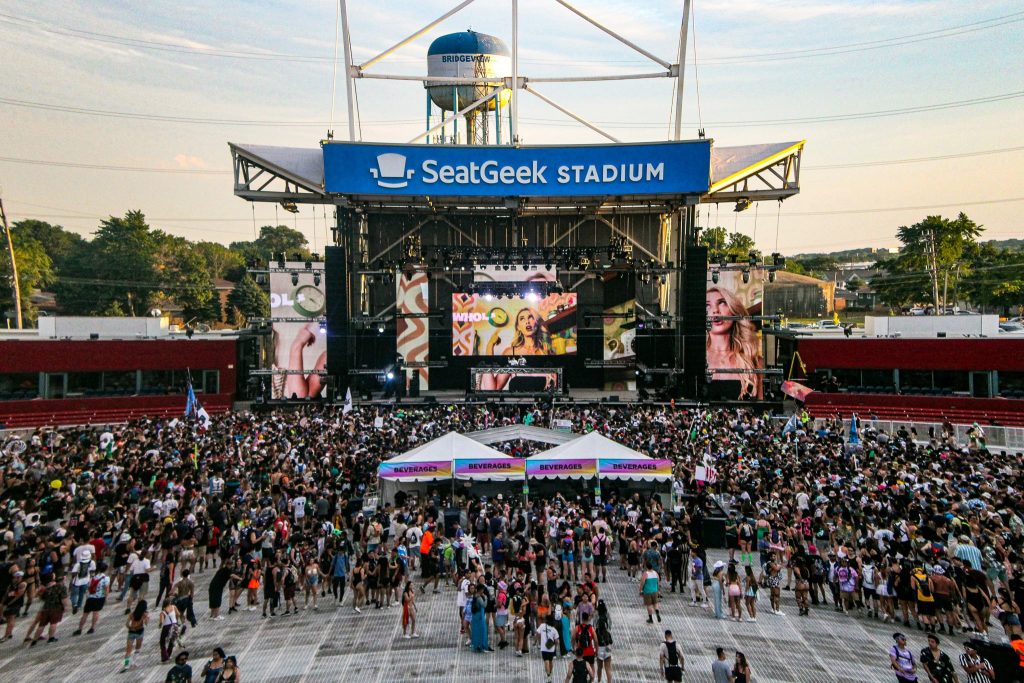 Photography by Delilah Bestler of the Stadium Stage

The Stadium Stage is considered to be the main stage. To get to this stage, you have a set of stairs in and out, so be prepared to get an excellent butt workout. There is also ramp access for those who need it which I really appreciated.

Once inside the stadium, I had the option of being in the floor space dancing freely and raging in the pit, or being seated in the bleachers to relax my legs. The stadium does not have portapotties. Instead, it had bathrooms, food, and drinks. 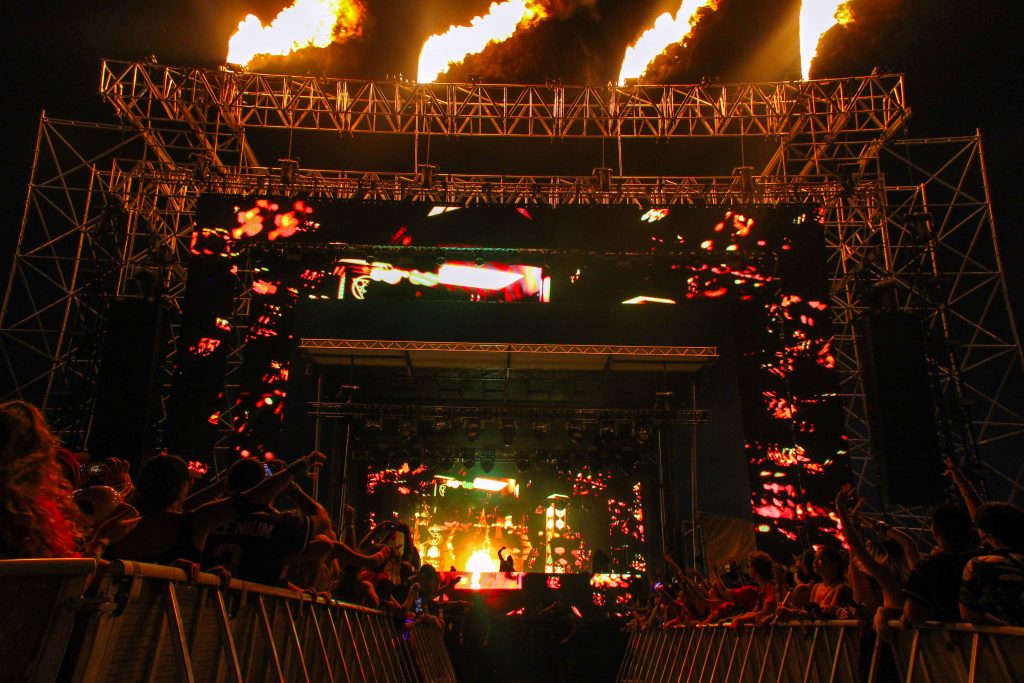 Photography by Delilah Bestler of the Vega Stage

The Canopy and Vega Stages

The Canopy stage is where house music shined. It had a nice covering for people to enjoy the music and escape the sun.

The Vega stage was a headbanger’s happy place. Its design featured five towers with LED panels and fire spouts at the top. As a bass music lover, I spent a lot of time here.

The Incendia Fire Pit is a traveling stage that has been seen at other festivals like Burning Man. The Silent Disco Stage was between the Incendia Fire Pit Stage and the Vega Stage. At these two stages, you could see smaller artists and fresh talent.

For the Silent Disco Stage, the fest provided headphones to make it an incredible silent disco experience. The staff did an excellent job monitoring and cleaning the headphones between each use among different people.

The Chill Dome was the newest stage at NCMF. It was illuminated by lasers and air-conditioned so festival-goers could escape the heat and listen to some LoFi, downtempo, and chillhop music. It was the perfect place for me to relax.

Friday was my more relaxed day as I wanted to take my time, get adjusted, and explore the grounds. As such, I spent the morning preparing myself and ensuring my camera was fully charged. Lastly, to prepare, I picked out my water pack and listened to my North Coast Music Festival Spotify playlist until it was time to leave.

Once I made it to the venue and through the media check-in and security line, I went straight for The Canopy Stage to see CID. 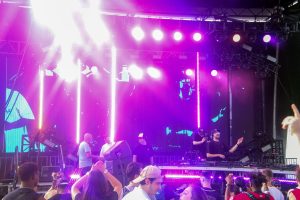 Photography by Delilah Bestler of CID

Next, I made my way to the Stadium Stage for Deorro and then back to The Canopy to see Eli & Fur.

I really walked around and listened to as much music as possible on my first day. I also sat in the Rainbow Lounge and played with smoke-filled bubbles at The Void. As the night continued, I gathered my stuff and headed to the Chill Dome to relax a bit and give my legs a much-needed break.

Leaving The Chill Dome was a trip! It was drastically darker, and The Vega Stage flames ushered me back into the festival. I made it in time for the start of Madeon’s set. Two pillars lighted the stage until the blackout screen started rising to reveal the silhouette of Madeon. He had a lot of great visuals. Watching him as he switched between the pillars mixing and singing on the mic was super cool. 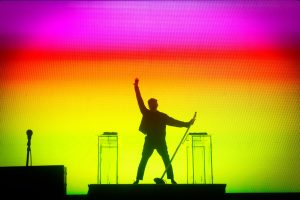 Photography by Delilah Bestler of Madeon

Halfway through, I ran over to The Vega Stage to get wobbly with Boogie T and rage with Subtronics. I headbanged the most during his set! 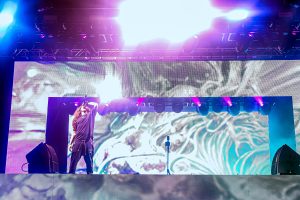 Photography by Delilah Bestler of Subtronics

Finally, it was time to see Armin Van Buuren. He closed out night one with an AMAZING set! He really brought the energy. Flames and lasers flashed across the sky, and not one person was sitting the entire time. 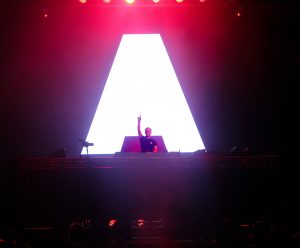 The night’s last song was his newest single, “Superman” or so I thought. It ended perfectly and then after a brief pause, he finished the evening with his single “Blah Blah Blah.”

I’m personally not the biggest fan of this song, but it got me moving and ended the night on a high note. 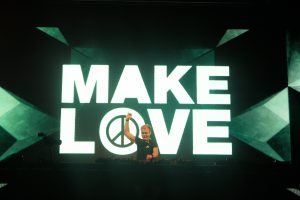 It truly was a great first day at North Coast Music Festival.

On Saturday, I woke up and was READY to head back to North Coast Music Festival! I was rested, the batteries were charged, and I had my schedule. Saturday was a little busier with all the artists. I wanted to ensure I saw everyone on my list and got photos. The security line was a little longer but it did not take very long to get through. I met up with some friends to say hello before we embarked on the festival grounds. 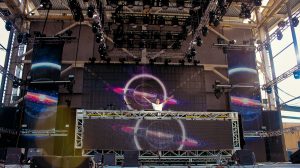 I saw a lot of great sets from William Black, Jason Ross, LP Giobbi, Dombresky, and Mitis. During Mitis, I started feeling a little low energy and joking call Saturday “Sad Boi Saturday”. Although I love some sad boi music, I needed a pick-me-up at that point! 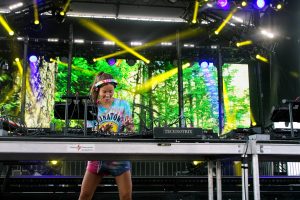 When it came time to discuss who was the next on the list, I decided to skip Said The Sky and Tchami x Malaa to rage out for Wooli and Seven Lions. A choice well made and boy was I happy with it because Wooli and Seven Lions KILLED IT! My heart was happy and my energy was back to where I wanted it. 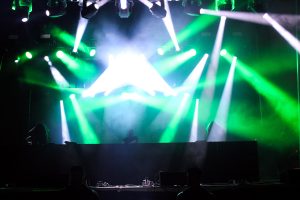 Photography by Delilah Bestler of Wooli

With my spirits back on high, I danced my way to The Stadium to meet back up with my group for the final set of the evening, Illenium! I have seen Illenium many times prior, and his sets can differ, so I did not know what to expect. I walked into the media pit, waiting for the set to start, and I was blown away. 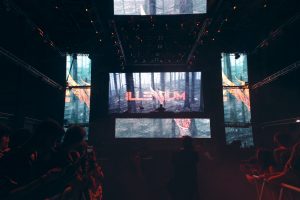 Photography by Delilah Bestler of Illenium

He started his set off with a hugely popular song between him and Excision called “Gold”. It only got harder from there. He played other songs like “In Your Head” by RL Grime, “Laserbeam” by Ray Volpe, “Disorder” by RIOT and so many more. 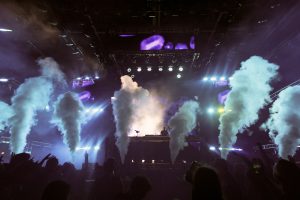 Photography by Delilah Bestler of Illenium

Of course, he also played fan favorites “Crawl Outta Love” and “Beautiful Creatures”. As the set ended, it slowed down a little for a nice firework display until the final song, “All That Really Matters” featuring Teddy Swims. This song is his latest release and has a really great message in it with the lyrics of finding someone who loves you. Love really is the only thing that matters in life!

Sunday morning, I woke up to the sound of rain and moved a little slower as a result. I spent the morning watching the weather forecast and preparing in case of rain. If you live in Illinois, you know that the weather is pretty much made up, so prepare as much as possible and expect the unexpected.

Sunday was going to be my busiest day. I had my interview with Kaivon, and it seemed that everyone I wanted to see overlapped, which means I was going to be doing a lot of walking around. I downed several cups of coffee, packed my bags, and made my way to the SeatGeek Stadium.

There was practically no line once I arrived, and it seemed to be the least busy of all the days. It was also the earliest I had arrived all weekend as I refused to miss HVDES set. This set marked the start of a crazy day. 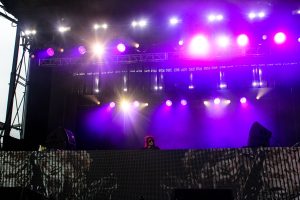 Photography by Delilah Bestler of HVDES

To say I got my cardio in for the day is an understatement! I spent the day dancing and running between all the stages for Kaivon, UBUR B2B Aweminus B2B Yakz, Baynk, Must Die!, Jai Wolf, Channel Tres, Slander, Svdden Death presents VOYD, and finally Porter Robinson. The stages were pretty close together, so it did make it easy.

In between Jai Wolf and Channel Tres was my interview with Kaivon. I was everywhere and having the best time! 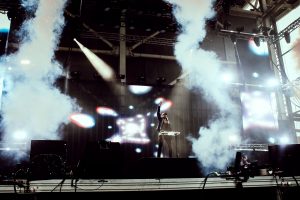 I couldn’t wait to see Slander as they always throw down. They started strong, and the crowd was going crazy! Until they slowed it down and told everyone to hold on to someone they love for their song “Back to U” with William Black. 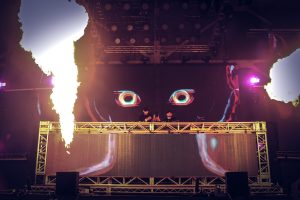 Photography by Delilah Bestler of Slander

Seeing everyone take a moment and show each other love was really cute. However, this moment of cutest was just that; a moment! They followed this up by yelling at the crowd, “Make a pit and get ready to mosh.” The media pit was engulfed by security who was telling me and the rest of the media there that they needed to leave. 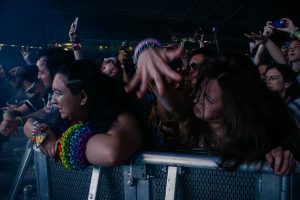 Photography by Delilah Bestler of headbangers in the crowd

Svdden Deaths set was great as always. I headbanged, raged, and met some really cool people. I stayed for most of Slander’s set until it was time for Svdden Death and then back again to see Porter Robinson. 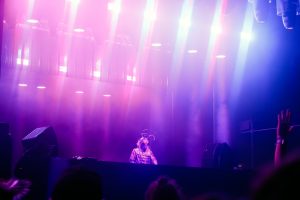 Unfortunately, in my opinion, the night did not close out strong. I have seen Porter Robinson many times, but his set at North Coast Music Festival left something to be desired.

Final Thoughts on my North Coast Music Festival Review of 2022

One thing I would love to see done differently is the stairs and ramp to The Stadium Stage. There was a point when the stairs were only used by those trying to leave the Stadium, and those trying to get in could only use the ramp. This made it a little inconvenient as the ramp became crowded with people and barely moving. Also, it was harder for those with disabilities to use the ramp.

Overall, it was a fantastic weekend! If you ever have a chance to check out North Coast Music Festival, you should! The sets and crowd were stellar and the staff was extremely friendly. I gained new muscles from tackling the stairs and got so many amazing photos. Here is my favorite. 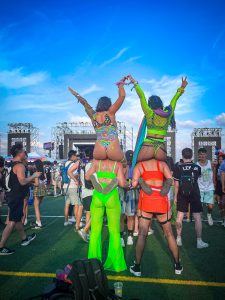 Photography by Delilah Bestler of festivalgoers

What was your favorite aspect of my North Coast Music Festival Review? Swipe up to comment below and let me know!