11 Sep Marshmello Has a Flawless Victory on American Ninja Warrior 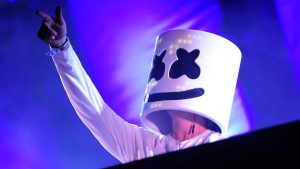 This viral video below of Marshmello flawlessly running the very difficult American Ninja Warrior obstacle course is a must watch. He whizzes through each obstacle as if they were monkey bars on a children’s playground.

The American Ninja Warrior performance is a hilarious moment we never knew we needed. This worldwide famous musical treat loves to pause his production tables just to tickle our funny bones. Staying true to character, the helmeted DJ easily completes challenge after challenge in one of the most difficult courses ever created.

Very few actual athletes have successfully run this course. Marshmello finishes it with ease. The helmet doesn’t get in his way one bit. Adoring fans are heard cheering him on as the camera pans to their gleeful faces. The DJ/ninja even adds some flair to the show. After each conquered obstacle, he celebrates with a little jig and a shake of his booty.

The very famous DJ, dressed as a marshmallow head with a goofy smile, has entertained us over the years in a lovingly comedic fashion. He has a wildly popular series called, “Cooking with Marshmello” on YouTube. One episode was a Mother’s Day special cooking with Mama Marshmello. The featured dish was chocolate marshmallow pie. Yikes! Maybe it was safer for him to cook steak with Papa Marshmello?

Now don’t be silly, it’s obvious there was a very talented stunt double under that helmet. This is almost reminiscent of that one time at EDC 2016. He promised fans he would reveal his secret identity. Tiësto revealed himself as the man behind the mask. Or that other time at EDC 2018.  Dotcom aka, Christopher Comstock, supposedly brought Marshmello on stage with him. The two standing together was a ploy to debunk rumors that they are the same person.

That Marshmello fella is a tricky little treat. Want to follow the hilarious DJ through his American Warrior Ninja course? Watch the video below.

Do you think I won or lost on American ninja warrior? comment below ⬇️

Do you believe that was really Marshmello crushing the American Ninja Warrior course? Swipe below and tell me what you think.