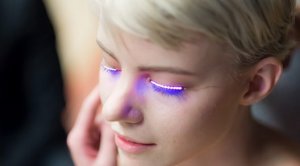 Tavey Designs have recently started a Kickstarter for LED false lashes titled “F.lashes.” F.lashes use a modern technology controller that tracks the movement of its wearer.The lashes themselves are just like regular lashes.They are easy to take on and off using adhesive and are reusable. The lashes are said to come in seven unique colors and come with several unique effects that vary by movement and setting. Though the product is not on shelves yet, Tavey designs have far surpassed their goal. F.lashes would be great for both raving and festivals, or even a unique fashion choice.

However, many are skeptical of this new product. As it has a strong reliance on movement and dance, several fear the chip sensors could cause several safety hazards and injuries. Though they are water resistant, other interferences such as harsh environments are bound to happen in the environments they will most likely be worn. More so, Several fear a battery explosion and being attached to the head causes several concerns.

Seeing F.lashes in action would be absolutely incredible, but many are skeptical for haphazard.  Hopefully, Tavey designs will show the world what an incredible and safe product they have created. Will this be the next big trend in ravewear?