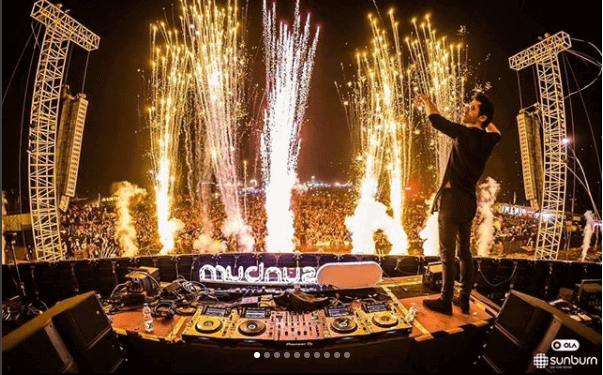 Sunburn festival is the largest festival in Asia. In 2009, CNN ranked Sunburn Music Festival as one of the top 10 music festivals in the world. The festival lineup included favorites such as DJ Snake, Axwell, Sebastian Ingrosso, KAYZO, Martin Garrix and most important of all, KSHMR.

KSHMR is one of my favorite DJ’s. Last year, KSHMR ranked #12 on the DJ Top 100 list. To me, Each set of his is as transcendent and as powerful as his last performance. From seeing him 4 times, all in New York, I try my best to tune in every year for the Sunburn Festival in Pune, India. And with that, here are my highlights of his performance this year!

The set reminded me of when I saw him at Ultra and he performed at the live stage with such vigor. He had a live orchestra playing the introductions to his sound, which leads me to another favorite of mine. KSHMR had the live orchestra perform the initial breakdown of Tsunami, which I completely adored. He also added a hardstyle interpretation to the end of Tsunami, which feeds my love for hardstyle.

I don’t want to give too much away but, this is what I loved about KSHMR’s Sunburn set!

What’s your favorite KSHMR song? Swipe up to comment below and let me know!