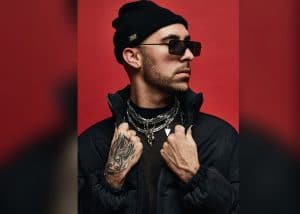 Want just a taste of KANDY’s fresh sound and vibrant perspective? You’ve come to the right place. Kevin Schuppel aka KANDY has climbed the charts within the last year competing as a member of the LGBTQ community in a straight male industry. We always speak on diversity referencing women and DJs of color but KANDY has come strong charting #9 on Billboard charts with one of his recent hits “Let Me Down.”

Some of his successes include creating hot remixes by elite pop stars’ such as Katy Perry and Selena Gomez. He has a recent collaboration with NERVO, “Supermodel,” and has garnished support from Diplo, Marshmello, DJ Snake, and The Chainsmokers. With the music comes festivals. His energy brought to life on the stages of EDC Las Vegas & Orlando, Phoenix Lights, San Diego Pride, and his headlining 2019 LOUD AND PROUD.

He enters this next stage of career releasing more music including “Upside Down.” KANDY’s new banger has a deep house bassline with a sensual female vocalist to back it. The lyrics take you on a ride describing the highs and lows of a relationship which could be considered a rollercoaster ride.

Getting To Know Kandy

Your new song “Upside Down”, what is your favorite aspect of this track?

With everything I make I try to tap into that middle ground of making a radio record but keeping it danceable & energetic at the same time. I love how this record has a message about something not so happy but you can get down to it on the dance floor!

How have you been spreading your music now that we are in these unique times of social distancing?

To be honest, nothing has really changed for me besides being able to play my live shows. I think people are starving for new music now more than ever because we’re all stuck at home!

You’ve called your music a pop/dance crossover, how else would you describe your sound to someone who is new to your music and has just started listening?

I’d describe it as music with meaning but something you can get down to if you hear it in a club or on the radio!

Your sound has transformed from being more on the bass end of the spectrum to now having a house feel, what has been the driving force for this?

House music has always been my first love but I struggled for so long to make music with meaning & message. Once I was able to figure out that formula I haven’t looked back!

You mentioned in a post that it finally felt good to be authentically yourself. When was the time you felt like you had to be different and how did it make you feel?

I’ve obviously struggled with my sexuality my entire life but once I started getting more heavily involved in the music industry I felt like I had to fit a certain mold to be successful. I felt like I was back inside that box I lived in my entire life so I finally said I’m not doing it anymore.

What challenges have you come across in the music industry being a member of the LGBTQ community and how have those challenges contributed to you being the artist you are today?

The music industry is very much like high school being that there are so many cliques and groups of people with a closed-off circle. I have yet to find where I fit & I’m okay with that! Doing my own thing has kept me focused on what I want & not what others think I should do.

Do you think you have helped to open doors for others who may identify as you do? How else do you think you could open those doors wider for future DJs?

Absolutely without question! The amount of DMs I get from aspiring music producers telling me how I’ve helped them has been insane. However, I do want the focus to be more on my music rather than my sexuality!

You have a recent song “Supermodel” with Nervo, how was it working with the twin Duo? How has that collaboration added to your style?

It’s been such a joy to work with NERVO & we actually have more stuff in the works! It’s been a full circle for me because they were one of the first duos I ever experienced live.

Can you tell us about your imprint, the Cavity Collective, what is it all about including your goals for it or its mission with impacting the music industry?

I started the collective a while back when I wasn’t really established yet with the goal of trying to push other undiscovered artists that deserved to be heard. I stopped releasing music on there for a bit because I want to do it the right way when the time is right!

Who is someone that has been influential in your life, music or otherwise, and how have they changed it?

Lady Gaga is my biggest inspiration. The way she presents herself through music, art, & fashion all while standing up for what she believes unapologetically is exactly what I aspire to be like.

You’ve stepped into and owned your sexuality, transitioned into a pop sound which you’ve always wanted to create, have had your music streamed millions of times, and have been acknowledged by top DJs; what other achievements would you like to add to your music career bucket list?

It may sound crazy but down the line, I’d really like to screen write my own series, start my own fashion line, & even get into acting!

What do you credit as the reason your career skyrocketed from being a bedroom producer to a Billboard artist?

I think if you work extremely hard creatively day in & out anything is possible. I also have an amazing team of people around me that understand my vision which is super important.

As a former bedroom producer, what advice would you give fellow DJs coming up in the industry just as you did?

Find what makes you special & go with it! Always go with your gut & do what feels right. Work hard every single day. Put music first before everything else & most importantly be kind to everyone.

What upcoming projects can your fans expect to see from you in the near future?

Did you enjoy this interview with KANDY? Scroll up and comment below to tell me why you think he’s fly.