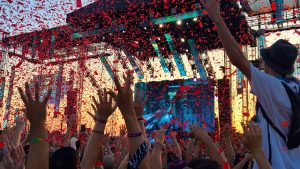 Gary Richards, better known as Destructo, has spent the past ten years of his career putting on infamous events. The events he has thrown are HARD Summer Music Festival, HARD Day of the Dead, and of course Holy Ship! Before his 2017 HARD Summer at the Glenn Helen Amphitheater, he tweeted that he would be leaving the Live Nation kingdom, “to pursue an incredible new opportunity.”Dedicated HARD and Holy Ship! fans were left in dismay after his announcement that he would be leaving the very festivals he created.

This incredible new opportunity Gary spoke about is none other than a new brand he plans to create named AMF. AMF is short for all my friends. He will be doing this at his new business how with the EDM firm LiveStyle which you can read more about here.

We can all agree that Destructo is an electronic music pioneer. From throwing small raves in his native city of Los Angeles in 1991, to holding the very first rave on a cruise ship, Gary Richards is a true legend of EDM. Other than his pure marketing ingenuity, his lineups consisted of substantial names such as Snoop Dogg, Ice Cube, Skrillex, and even Migos. Will HARD events continue with the same quality of performers once Pasqual Rotella’s Insomniac Events take over? In my personal opinion, I believe Insomniac will match if not surpass Gary’s legacy by taking on these future events.

Earlier, I mentioned HARD events have been labeled as “infamous.” This is due to multiple drug overdose cases, lack of stage production, and of course, the improbable heat illuminating from the southern California sun. Nevertheless, these occurrences do not only happen at specific HARD events. Most, if not all, music festivals run into problems such as these. As a HARD Events festivalgoer, I personally experienced the fiasco that was HARD Summer 2016.

Although the lineup was packed with heavy hitters, there were only a couple of items I could complain about. Obviously, the scorching Southern California heat was out of my control. But hours of waiting in line, stage placement, and overall lack of production could have been greatly improved. I came to the conclusion that HARD was attempting to achieve somewhat of an EDC feel, being at a speedway and all. Stage travel time and the deficiency of set production were the only two complaints I had for this specific year at HARD Summer.

On a lighter note, Gary has proved that his events revealed more positive than negative outcomes. However, with the powerhouse that is Insomniac Events, Pasquale will be able to shine in places that Gary did not by taking over the HARD paradigm. For the future of HARD, three-day events and shorter entrance lines may be thrown into the shuffle. As for stage placement and production, this is where Insomniac thrives. This is clearly seen with their earth-shattering production layout, specific genre themed stages, and most of all, the breathtaking art. Not to worry, the Gary HARD legacy will live on but under the Insomniac label.

On April 24th, 2018, HARDfest Instagram released this year’s lineup. It revealed an array of artists that will be performing on the 4th and 5th of August. Let’s just say that there have been better HARD lineups in the past, much better in fact. Artists such as Snoop Dogg, Dog Blood, Bassnectar, and Migos from the previous year set such high standards right before Insomanic was about to take over. Not to mention, in my opinion, Glen Helen is one of the best venues HARD has dealt with.

Nevertheless, while Insomaic takes over Gary’s kingdom, Pasquale claps back with huge headlining sets such as Borgore b2b Getter, Zeds Dead b2b Jauz, and even Rick Ross and Travis Scott. The final questions in this equation are, “Will Insomanic be able to keep up with HARDs previous year to year firing lineups? Will Insomanic be able to make up for previous years of sub-par HARD production?”

All in all, the downfall of losing Gary Richards will be the back to back years of huge name artists due to his universal friendship with almost every big name. However, the gain of Pasquale Rotella will be his mastermind genius behind unbeatable production quality.

Do you want to go to HARD Summer Music Festival this year? Click here to get your tickets!