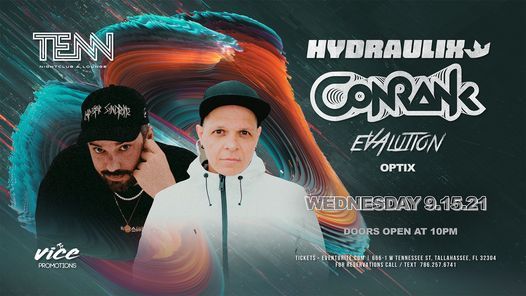 Tallahassee is one of the biggest hubs for EDM fans. Most of the city’s residents are either house heads or wubz fanatics. That is why Hydraulix and his fellow producer Conrank would be bringing something new to the Tallahassee electronic music scene. A stellar mix of heavy bass, dubstep, and riddim is what they had in store for the attendees at TENN Nightclub, on Wednesday of September 15th.

The night started off with a set from local disc jockey Optix. He played a lot of well-known dubstep bangers to set the stage for Evalution’s set. When Evalution took the stage, he was instantly applauded by his fan club. After playing in Tallahassee during his college years, the upcoming artist has built up a strong base of local supporters.

His set featured long buildups full of anticipation, accompanied by heavy drops. One of his transitions featured (let me see your hips) “Swing” by Savage that was adapted into wubz after the chorus. Another was Tiesto’s “The Business”, which included an elongated drumroll buildup with a guitar-centric drop. He also blended a wubz track into lyrics from Mac Miller; this was mixed into a “Like a G6” repeated loop that led straight into a climax.

My favorite song played by Evalution was when he brought out the electric guitar for a bass boosted version of “Purple Haze” by Jimi Hendrix. The crowd cheered when he queued up “Flow”, one of his newer tracks featured on Excision’s Subsidia label.

Evalution then ended his set by showing off his skills on the guitar. He also slowed down the BPM and lowered the intensity of his set into a more jazzy vibe. This would contrast with Conrank’s set nicely by giving a crowd a rest before their bodies were manipulated by heavy riddim.

Conrank stood out as a jack of all trades when it comes to being an artist. He is an equal part producer, disc jockey, and performer. He started off his set with a barrage of heavy bass joined by buildups full of reverb and space-fueled sounds. There were real-life noises mixed in too, such as explosions, bombfires, and car engines roaring.

A few of the tracks that were played featured reggae vocals over hard EDM. The combination was somehow soothing, even though we were all headbanging to it. Other songs had short vocals (a few words or a sentence) layered on top of choppy bass. Conrank knew the perfect times to grab the mic and enegage with the crowd. This was effective in entertaining us while we were able to take a quick breather and prepare for the soon-to-follow assault of heavy dubstep.

When it was time for Hydraulix to take the stage, the crowd was more than ready for his unique style of mixing. The DJ walked out wearing shorts with skulls on them and a black shirt.

He opened with hard wubz but after a couple of tracks transitioned into chill dubstep. One track had repetitive lyrics saying “I am not your homie”, with booming riddim in the background. Another had a heavy alternating bass drum complemented by punk rock lyrics.

However, the majority of Hydraulix’s set had no lyrics. It consisted of buildups with thunderous drops that transitioned immediately into the next buildup. You could feel the bass shake your shoes and shoot up the rest of your body. As Hydraulix approached the end of his set, one of the buildups steadily increased in volume.

Suddenly, a whistle could be heard that progressed as if it were a thunderclap. The drop was an exclamation point on the night; a bass cannon detonation with screeching riddim. Hydraulix guaranteed that the concertgoers who had come with high energy went home with even more of it.

Have you seen Hydraulix, Conrank, or Evalution perform? Swipe up and let me know what you think of their sets!