Posted at 17:05h in Reviews by Denice 0 Comments
0 Likes
Share 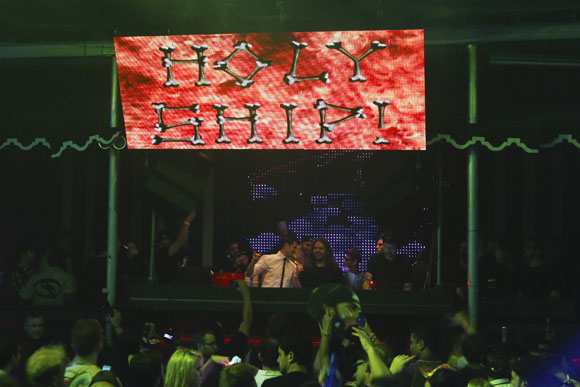 The Holy Ship! official pre-party took place Tuesday, Feb. 17 at Club Space in Miami and boy, was it incredible! As if the lineup wasn’t already packed with awesomeness with artists like Baauer, Jack Beats, Milo and Otis, AC Slater, Destructo and Busy P & friends, but a very, very special guest hit the stage. That guest was none other than the father of dubstep himself, Skrillex! Playing alongside Baauer, the two packed the upstairs of Space and made for one hell of a performance. Baauer’s rap remixes alongside Skrilex’s wompy hard style dubstep had everyone singing along and raging hard. The club was literally “going up… on a Tuesday!” as Drake and Makonnen would say. Tommy Trash and Valentino Khan also made special appearances.

“It was a pretty awesome kick off party that was totally unexpected, especially when Skrillex came on. The DJ’s played back to back and all in all it was a bundle of really good music,” said Metin Kumru, owner of Stache Records.

If the pre-party is anything like Holy Ship!, then those attending are in for one hell of a time! If you didn’t get tickets this year then visit www.holyship.com for more information and register so you can be the first to know how to purchase tickets for next year!