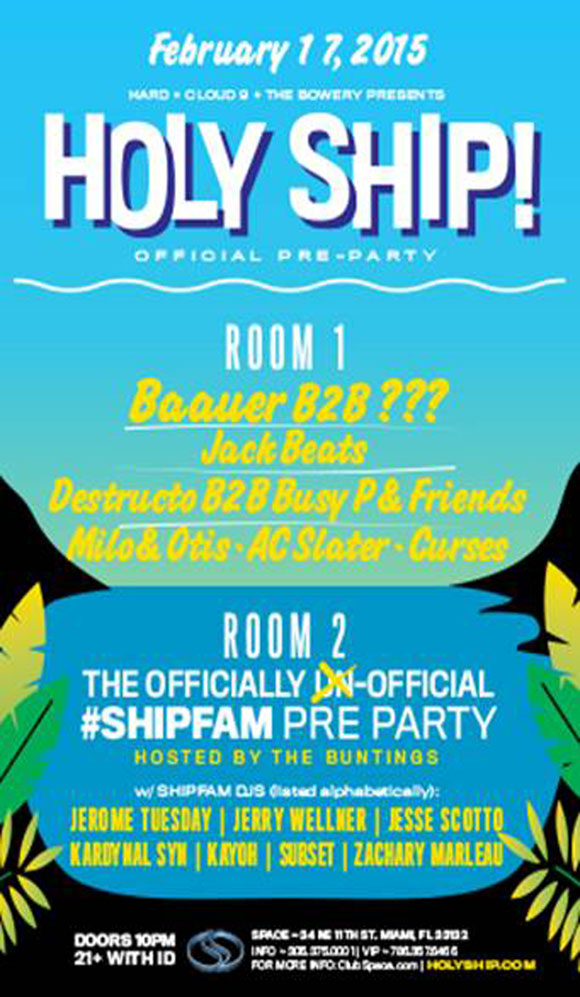 Get ready Miami because Holy Ship! is back! If you were fortunate enough to land a ticket this year, then you’re  getting ready to set sail and hit the high sea’s during the ships second voyage on the beautiful MSC Divina during  Feb. 18- 21. However, if you’re like me and weren’t quite that lucky, don’t worry because there’s good news! You can still join the official Holy Ship! pre-party on Feb. 17, at Space Miami!

Space will feature two rooms of music for fans to choose from. In room one, you’ll find Bauur, Jack Beats, Destructo, Milo and Otis, and AC Slater. In room two, The Buntings will host their yearly, “Officially Un-Official Shipfam Pre-Party,” which consists of Shipfam DJ’s who are both Holy Ship! passengers and DJS.

The second trek of Holy Ship is bringing one of the biggest and best lineups to date including Skrillex, Fatboy Slim, Bauur, DJ Snake, Basement Jaxx, Ty Dolla $ign, DJ Mustard and more. Aside from the music, fans will have the chance to bid on cool items like photographs, posters, festival tickets and more to raise money in support of Positive Legacy – a non-profit whose mission is to integrate live music and service by engaging fans and giving back to local communities through humanitarian and environmental projects.

Hosted by HARD Events, Cloud 9 Adventures and The Bowery Presents, this show will be one for the record books. Buy your tickets and get more information here.

We’ll see you there!