Posted at 19:25h in Festival by Denice 0 Comments
12 Likes
Share 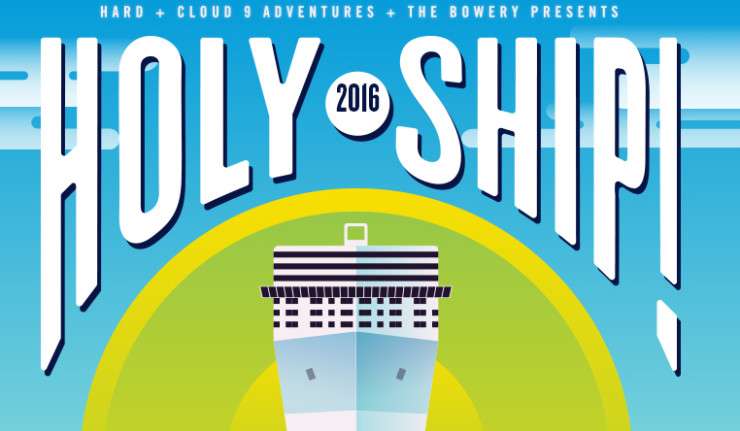 Every year, HARD hosts its signature three-night, four-day music cruise that sails out of Miami, FL and to the Bahamas. Holy Ship! 2016 will mark the event’s fifth active year since its inception in 2012. Holy Ship! has made waves in the EDM world by accurately branding themselves as one of the most prolific and insane music cruises in the world. Since 2012 however, Holy Ship! has made significant strides by enhancing the lineup with more headliners and music producers, as well as offering two separate sailing dates. Similar to 2015, Holy Ship! will have two separate cruises with entirely different lineups, one in January and one in February.

This year, the lineup has amassed one of its most star-studded lineups to date with both DJ heavy hitters and EDM’s rising prodigies. The January Holy Ship! lineup includes prominent personalities such as Kaskade, Dillon Francis, Flosstradamus, and Steve Aoki, while also featuring other appearances including Tommy Trash, GTA, Kill the Noise, Wiwek, Valentino Khan, and Robin Schulz. Holy Ship! has done it yet again with January’s lineup as it features many diverse DJs with an even more diverse set of styles and talents.

The February lineup is comparable, if not better, including notables such as DJ Snake, Porter Robinson, Chromeo, and a special b2b set from RL Grime and Baauer. Other influential appearances include Boys Noize, Flux Pavilion, What So Not, Tchami, Cashmere Cat, Thomas Jack, Mercer, and Jauz.

As usual, both lineups include a well warranted appearance from the founder of HARD and one of the major contributors to Holy Ship! itself, Destructo. Holy Ship! is also renowned for helicoptering in special guests to perform both on the ship and on the daytime island party. In fact, the 2013 Holy Ship! sailing featured Skrillex as the surprise guest, and again in 2014 surprised audiences with appearances from Tiesto and Pharrell Williams. A little more than a year ago Holy Ship! brought out Disclosure and Kaskade as guest performers. That is why it is almost safe to assume Holy Ship! will bring some popular special guests in 2016 as well.

The non-stop thrill of Holy Ship! sets out of Miami and travels to the Bahamas, with port stops in both Nassau and another at a private island before setting sail back to Florida. The private island port stop features a daytime dance party on the beach. The ship itself has features such as a 10,000 square foot casino with blackjack, roulette, craps, and endless slot machines. The ship also has restaurants to suit every occasion and taste as well as interactive activities that are led by DJs and producers themselves. For instance, some of the fun events Holy Ship! has to offer include Not-So-Laidback Kung-Fu with Laidback Luke, Henry Fong’s Holy Aquatic Olympics, and DJ lessons with turntables expert and producer A-Trak. The Holy Ship! is a thrilling musical voyage, similar to that of the Mad Decent Boat Party, with all-star musical guests, electrifying activities and events, and beautiful, tropical stops in the Bahamas.

There are two Holy Ship! sailings. The first will take place from January 3-6 and the second will take place February 10-13. Both sailings leave and arrive in Miami and stop in the Bahamas. Cabin selection for the former takes place on July 13 and 14, while the cabin selection for the latter takes place on July 15 and 16. Holy Ship! is 21+ so be sure to take this into account when making reservations. The ship has a 4,000 person capacity and usually sells out during pre-sale, so be sure to snag tickets early before they all are gone! For more information, visit holyship.com to check out the full lineups, videos and recaps of past cruises, and the latest information on bookings and the ship.