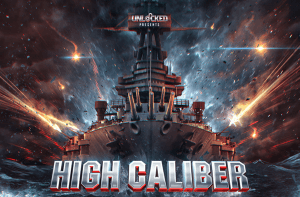 This past weekend High Caliber set sail for battle; to earn rank amongst its big established festival competitors. This was High Caliber’s inaugural event. To draw the masses to the party, Unlocked promotions had to think outside of the usual and came up with a festival aboard a naval battleship, the New Jersey BB-62.

The ship first launched December 7, 1942. In its 48 years of service, the New Jersey earned the Navy Unit Commendation for its Vietnam service, nine battle stars for World War II, four for the Korean conflict, two for Vietnam, three Campaign stars for service in Beirut, Lebanon, and Persian Golf. The ship was decommissioned in 1991 and donated to serve as a museum on January 20, 2000. It’s retirement brought with it 19 Battle and Campaign stars earning it the title as most decorated surviving warships. On September 30, 2017, the ship was recommissioned into service in the role of its second calling. The host of a beast Bass rave featuring over 20 artists on 3 stages.

Artist included 12th Planet, Ganja White Night, Bleep Bloop, Gentlemen’s Club and Squinto all DJ’s who have earned stripes within the Drum and Bass and DubStep genre. The group I ventured with had peak interest in Ganja White Night and Bleep Bloop. I, however, was excited by Um.., their set was killing the game. The 3 stages included the main stage on the pier. The other 2 stages were on the stern and the bow of the ship. As you headed down the corridors of the ship you really have the experience of it being a battleship. They did not remove the structures, for example, the fighter plane that was landed on the deck. They even had a lookout on the top level which overlooked the crowd of the main stage. That was a hot view.

Overall, I felt the concept was nice. Some improvements as they grow bigger should include better weatherproofing. Only one stage had a tent, therefore, the other stages were frigid. There was not enough dancing that could keep me warm, 62 degrees Fahrenheit in September off of the water is crazy cold. The vendor selling the rave shawls, I’m sure they made a killing that night. I bought 2 for $30 and it was a major key. I guess now I need to invest in a black cat spirit hood. Also, the light show was far from impressive. I know, equipment is expensive, so I am hoping to see growth in that area in the future. There were also certain areas of the ship that were blocked off. I would have wished for the entire ship to be open for viewing. Just as EDC has rides you can wait in line to play, I would have loved to see below deck, which I’m assuming is the museum portion of the ship. I feel if they operate it as a tour allow small groups at a time, it would make for a great side activity while enjoying the party.

The light show was far from impressive. I know, equipment is expensive, so I am hoping to see growth in that area in the future. There were also certain areas of the ship that were blocked off. I would have wished for the entire ship to be open for viewing. Just as other festivals have secondary activities, like the amusement rides at EDC or the roller skating at Lolla, I think High Caliber could accommodate the same concept with tours of the museum. I feel if they could pull that off it would add to the excitement of being on this amazing battleship.

I think anyone who loves cool party locations and Bass music will definitely enjoy watching this festival grow. Let’s see if High Caliber will make its mark on the scene. They have a long road ahead in this battle of festival dominance.

Do you love Big Bass and Big Ships??

Well, keep an eye out for this festival in the future.

*** ANNOUNCEMENT! ***We're excited to announce High Caliber Festival on a BATTLESHIP! Early Birds are on sale NOW but extremely limited, so don't miss out and save before this MASSIVE lineup drops. Tickets ► HighCaliberFest.comEvent: https://www.facebook.com/events/139279206637607??ti=ia