22 Apr Henrix on fire! Releases on Mixmash, Plays at Avalon and The Light in April

Posted at 14:16h in Music by Denice 0 Comments
0 Likes
Share 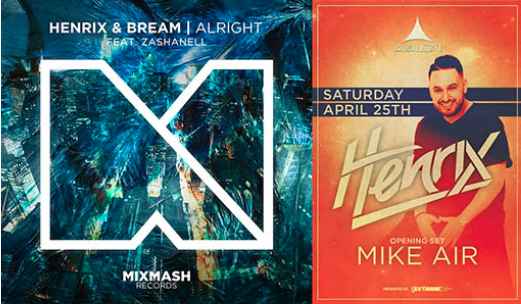 Hot on the heels of Miami Music Week and just in time for the 2015 festival season, bassmaster Henrix is back with a massive release and two huge shows coming up. His new track “Alright” speaks volumes to the sprit of the EDM community in terms of its innate positivity and resilience. Although much about the scene has changed since its early days, this track serves as a reminder to those kids who are still attracted to the music because it makes them feel at home in strange world.  “Alright” is an upbeat ride through big room drops accompanied by the sultry and yet soothing vocals of Zashanell that projects sheer good vibes through its entirety both lyrically and melodically. Click here to purchase “Alright” on iTunes, available now via Laidback Luke’s Mixmash Records.

You can catch Henrix live this month at the iconic Avalon Hollywood on April 25 and then at The Light on April 29, where he will undoubtedly be showcasing his new music, continuing his residency in Las Vegas. With the new release and two huge shows coming up, Henrix continues his hot streak in 2015, showing no sign of slowing down!