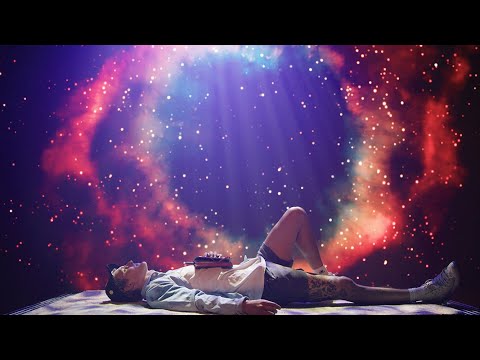 GRiZ’s performance of Rainbow Brain, his seventh studio album, does more than bend reality. The YouTube movie warped the minds of its viewers into a thrilling psychedelic journey. GRiZ has been on a tear the last few months, releasing breathtaking singles, all leading up to this riveting structured project. He streamed the album set on Twitch as well with the inclusion of his supporting musicians and lyricists.

The album movie started with a black screen that faded into a tree while jungle noises eerily played in the background. Then the bottom half of GRiZ’s ominous-looking face appeared. He was wearing a worn-down pair of converse, board shorts, and a light blue vintage jacket with flowers on the back. A circle of lights and fog surrounded him and the lone tree as he stepped onto a bed of moss.

Outer space tones grow louder as GRiZ walked between the hanging branches where he eventually puts both hands on the tree. It almost seemed like he was channeling his energy into it or its life force into himself. The tree reacted and its branches simultaneously lit up while they traveled up each one then started again at the bottom. A robotic yet soothing synth rang out as GRiZ fell back laying on the moss in a beaming spotlight.

“C h r o m e s t h e s i a” opened up the performance with a distant voice saying, “So start from the beginning.” This is the first “shaman” GRiZ refers to in these interludes as entities to guide listeners through the album. Then, Rainbow Brain text popped up in a unique, curly, alienated font as the album introduction set the mood. A saxophone got increasingly louder in the background and the dialogue continued. The words projected imagery of the powerful effect music can have on the brain. Then the sax came in completely and the scene cut away to GRiZ on stage with a myriad of lights all around him.

He bounced on his toes energetically as the beat in “Astro Funk” (the album’s first track) built. The screen turned black at the climax of the build-up. Suddenly, green and purple lasers shot chaotically in a futuristic light wave battle. “Astro” was said in a deep voice and the drop hit with so much force that it almost pulled the stage down with its ferocity.

The camera flashed over to a dancing GRiZ who moved in unison with the lights and the beat. Three large rings which get progressively bigger with height hovered above him. Alternating lights orbited enthrallingly around them. The edges of his baggy sweater flopped around carelessly as he moved, reflecting the groovy environment.

The beat became layered with a spacey disc scratch and made me feel like I was on a beach if the said beach was on Mars. The track had a jaw-dropping sax solo and switched up to a part with a narrated, “Hit me two times!” followed by two dub-bangs then, “A couple more times!” followed by more bangs.

Once “Astro Funk” came to its end, GRiZ cued up the next track “Vibe Check” on his board. The song starts with a radio announcer’s voice as the intro’s funky wubs played behind her. “Vibe Check” was GRiZ’s first single out after taking a break for a few months and gained a lot of traction for the album release. The sax solo is in this track too with a chorus full of nasty successions of bass. 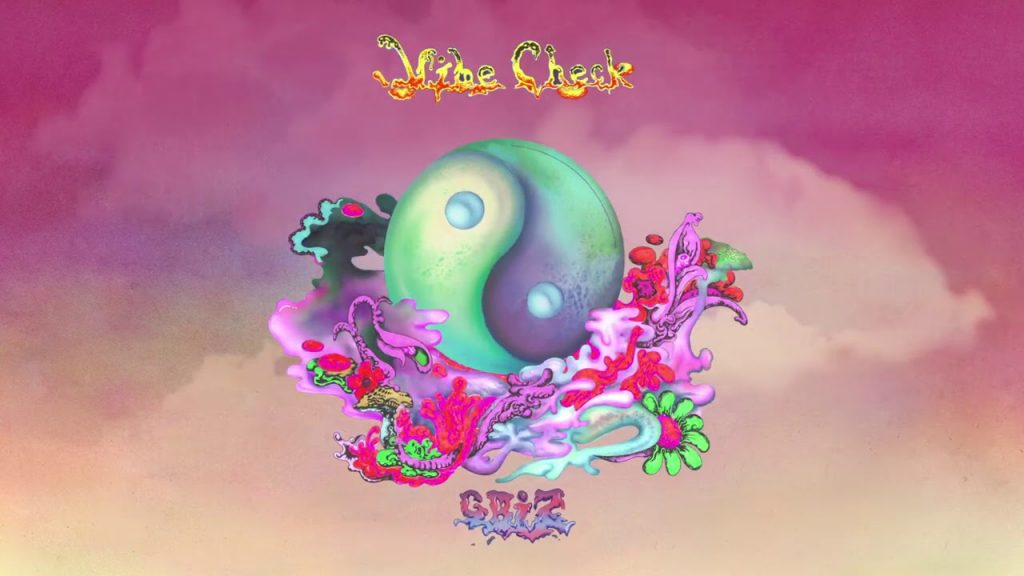 Burning Up the Floor

This song transitioned into the “Burn Up the Floor”, a thunderous collab with Jantsen. A nameless pimped-out red hair goddess appeared on stage to rap. She had long braids with gold rings in them, a fitted bucket hat with black-and-white bandana print, and green bedazzled glasses. Her extravagant white button-down went well with her plaid grey pants.

In the performer’s Jamaican-like accent, the catchy lyrics were chock-full of repetition and onomatopoeia; each word seemed to spring off the next. The camera darted between her and GRiZ like a strobe right before the build-up, cutting to both of them after each series of wubs. At one point the song pivots to an old-school rap beat, easily something I could see Ice Cube dropping a rap on.

“Tie-Dye Sky” is up next and it’s arguably the album’s best track. Between the mix of lasers, orbiting circles of rays, and colorful shapes, the lights mirrored the song perfectly. GRiZ looked out to the digital crowd and said, “Hit me with all you got” as a sporadic assortment of rainbows shot across the stage. The track had a high-pitched vocal laid exquisitely over a mashup of funk and dubstep that mimicked the tracks GRiZ grew up around. “To me, this track is like staring up at the sky and watching it explode into a kaleidoscope of colors,” the saxophone specialist said in a statement.

This track crossed over to an extremely fitting interlude called “R O Y G B I V.” A silhouette of GRiZ walked out to an all-white screen followed by rapper ProbCause and New Orleans native Chrishira Perrier. The colors of the rainbow were distortedly announced as the background mimicked each pigment and the musicians embraced each other. The video then cut to a kaleidoscope projecting a myriad of eccentric colors and designs.

Rainbow Brain Puts Your Brain in a Blender

As the beat built for the track “Rainbow Brain”, the kaleidoscope transitioned to a dark room with surrounding white spotlights. Chrishira Perrier repeatedly said, “Watch me go in” as she flaunted around in her feathered blue top and hot pink skirt creating a spunky aura of confidence. After her verse, ProbCause took the stage erupting into a rhythmic flow of lyrics. His relaxed annunciations and stage swagger aligned flawlessly with the beat. 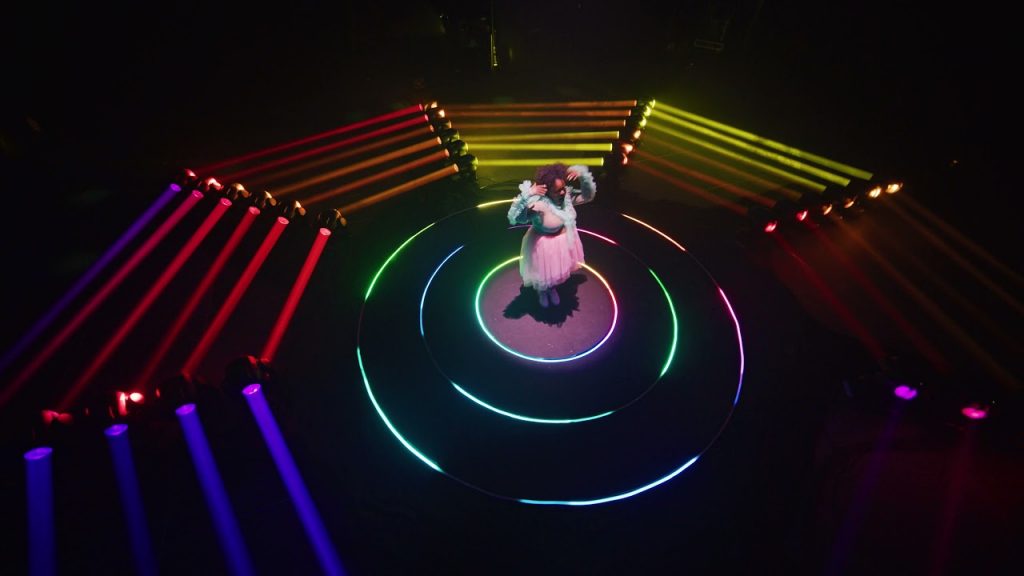 The word rainbow was then echoed out by GRiZ signifying the end of the track and the beginning of “Harmony”: an unconventional arrangement of jazz, funk, and wubs. The song also featured a mesmerizing sax solo from GRiZ under the illuminated tree. The line “creativity and the spirituality is all one” captioned GRiZ’s motivation behind the song.

To me, this means the two elements are like yin-and-yang, co-dependent on each other. Your creativity will blossom when you are self-aware and have an appreciation for yourself and the world around you rather than material possessions. On the other hand, you cannot observe the world around you and realize what truly matters without the creative mindset to do so.

Proceeding “Harmony” was “Gold”, a retro groove-infused track featuring the talented vocalist Cherub. Next, a camera effect that made Cherub and GRiZ look like they had come out of an 80s movie was initiated. Meanwhile, the two energetically boogied around the stage. The stage was luminescent with gold lighting and the lyrics were sensual yet eccentric.

Next up was “Daily Routine”, another unorthodox-styled track collaborated with Big Gigantic and ProbCause. This time it was Big Gigantic’s turn for an entrancing sax solo. The track was shot to mirror That ‘70s Show by spinning the camera to the next performer. The build-up was something you would expect to hear when getting sucked up by a UFO. A grimy progression of resonating bass.

This song was superseded by one of my favorite tracks on the album, “Other Side of Jupiter.” This track opened up with a beat similar to the one during the opening verse of “Dani California” by the Red Hot Chili Peppers. There is nothing more satisfying than listening to the combination of GRiZ’s guitar chords mixed with melodic bass. The track radiated Dark Side of the Moon meets chill dubstep vibes.

A Superlative Closing to the Set

Right when I thought GRiZ couldn’t step it up this far into the album, he transitioned into “Infinite”, a feel-good far-out evolution into the world of sax. GRiZ conspicuously displayed his unrivaled skills on the instrument as he danced under a vortex of different shades of pink and orange.

When the track switched to “Feel It All”, once again featuring Christina Perrier, there was no possible way to separate the two songs due to the paradisiacal smoothness of the transition. “I can feel it all why I daydream” rang out over the extraterrestrial wubs and this virtual concert in itself truly felt like something out of a dream. 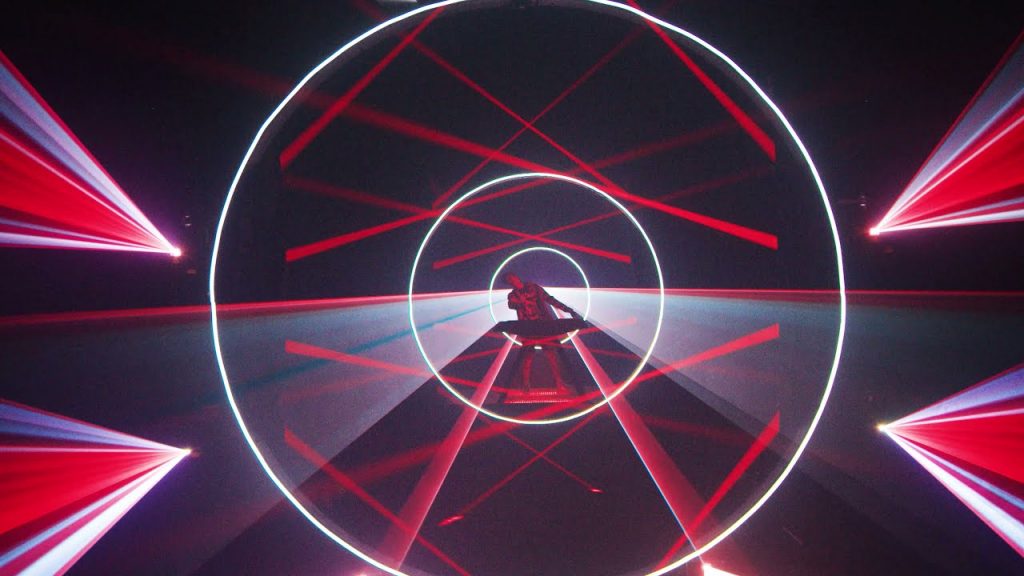 The concert advanced on and GRiZ performed “548 Mac Ave”. This one was pretty indescribable. I can only strongly advise you to give it a listen and get ready for your brain to detonate. As the track wrapped up, GRiZ transcended to another universe laying down in front of endless stars.

In a pure state of zen, GRiZ held a notebook with a pencil in it. This was possibly a metaphor for his mind or simply his book for jotting down creative ideas. “Another World” began next with the gentle playing of the guitar interwoven with lyrics that formed an environment that memorialized Pink Floyd, The Beatles, and other famous psychedelic rock bands.

The last shot of the film was of the tree as GRiZ’s final track “Echo Tree”. The track was stratified with diverse sounds, drums, and bass. While watching the credits roll up the screen of my laptop, there was nothing I could do but appreciate the brilliant imaginativeness that enabled GRiZ and his companions to construct this unforgettable masterpiece.

I do not think it is too early or unreasonable to say this is the album and performance of the year; personally, it is the performance I might only see once in my lifetime.

What are your thoughts on GRiZ’s Rainbow Brain performance? Swipe up to comment below and let me know!