Posted at 19:14h in Festival by Denice 0 Comments
0 Likes
Share 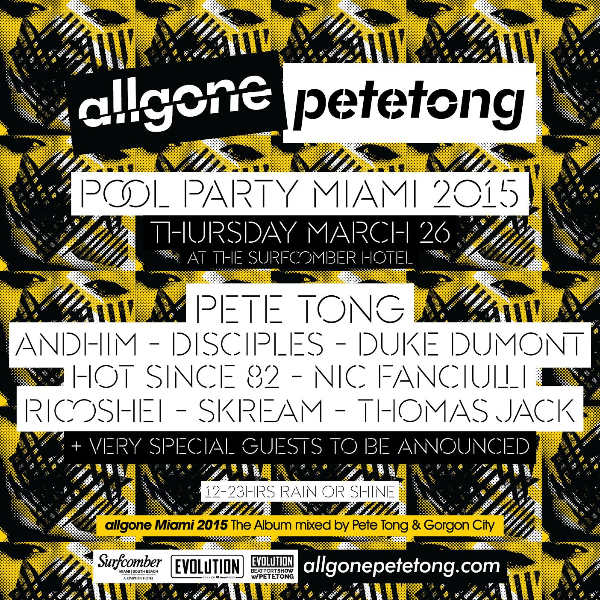 Another Miami Music Week lineup has just been announced! Pete Tong, the legendary BBC Radio 1 host and the industry’s curator of what’s hot, will be hosting the All Gone Miami Pool Party, Thursday, March 26, at the Surfcomber Hotel in South Beach. The event will feature a stacked lineup with some of the biggest names in dance music that will have any fan drooling over for the next month.

Joining Tong will be the illustrious Duke Dumont and Skream, fast rising stars Thomas Jack and Andhim, the mighty Hot Since 82 and more. Expect an abundance of secret guests and surprise performances too. Past guests have included sets from Eric Prydz and Luciano, all serving to raise not only the clout, but also the scope of what is already an unrivaled 12 hour session of dance music’s finest.

More on the All Gone Miami Mix

For those who can’t make it down to Miami, Tong’s annual All Gone Miami compilation mix will bring the sounds of South Beach to you. For 2015, he has teamed up with Gorgon City as co-mixers to bring fans a two CD mix featuring cutting edge house and techno from the likes of Booka Shade, Guy Gerber, P. Diddy, Scuba, Jonas Rathsman, Gorgon City, and many more. The compilation will be released on March 22, only a few days prior to Tong taking the stage at the Surfcomber. You can also listen to Tong daily on his IHeart Radio Evolution show, as well as weekly -on over 90 FM stations- for his Evolution Beatport show.

Will you be there? Swipe up and let me know!