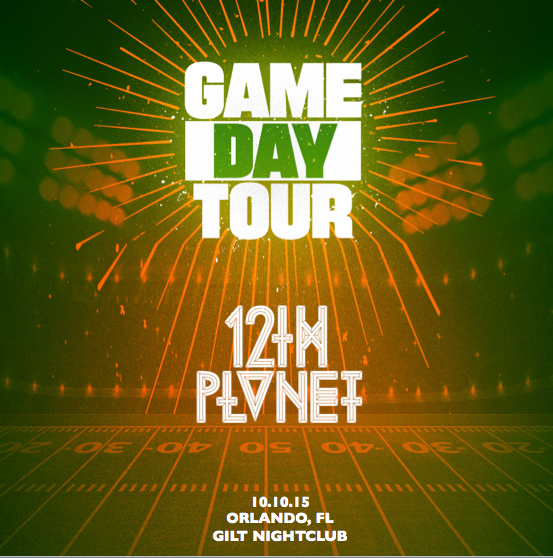 Approaching this highly anticipated Saturday night the bass heads came out to play at Gilt Nightclub. Kicking off the pinnacle of the weekend were local Orlando natives blessed with the resounding womps of John Dadzie aka: 12th planet.

Starting the night off with some dirty trap vibes, was the very talented producer Dani Deahl. This first act transported the crowd into full pandemonium from the euphoric, brain melting visuals, to the uncontrollable twerking. Deahl’s level of experience and sophistication spoke for itself as her performance had even the shyest of club attendees pulling themselves away from the bars and pool tables straight to the dancefloor. Those who were lucky enough to have enjoyed the premium bottle service, also were lucky enough to enjoy multiple views of this exclusive Orlando club from the upstairs lounge and EDM based crowd. The combination of the high and low hitting drops paired with the flawless transitions of this Chicago artist sent Orlando into a state of uncontrollable hype. Suffice it to say, the set was hypnotic, to say the least.

Tadeo, the following act, brought out the inner shufflers in all of us when he transcended the club into a deep house aesthetic. The crowd was undeniably united with this synthesized smooth atmosphere peppered with heavy bass. This lethal combo practically denied you any access of standing still. If you’re a club attendee seeking an artist that thrives in the realm of deep house, Tadeo has arrived and is making a name for himself as a deep, future house artist. In the words of Dillion Francis, Tadeo took it “von deeper”.

Riding the high that was almost tangible in the air the following act SLIINK. SLIINK is a well-respected producer and dj who has worked with famous artists such as UZ and Flosstradamus who kept us on a roller coaster of electronic stimulation with the continued intricate detailed visuals along with his various multi genre styled mix from trap to R&B that took the energy to a different level. With a solid dance floor under our feet, you could see the wave of heads bobbing that resulted from his bass filled energetic set. The speaker’s emitted pure gold as the club was reaching a higher capacity and body after body started to fill in the dancefloor to.

The last and final act of the night appeared at the apex of the show. 12th Planet finally approaches the stage as the screams of anticipation grew louder and louder. Now was when all left over bodies flocked to the floor to hear the dubstep genius in the raw, blow our brains out with his electronically superior sound. The lights suddenly transition to create a darker, dirtier and, heavy mood in this established club. All goes silent for a split second as all the bass head, dubstep lovers wait patiently to let the head banging commence! 12th Planet slays in his traditional style of bass heavy dubstep spitting subsonic waves that punch you right in the pit of your chest resulting in a loss of breath yet forcing you to beg for more! Looking to your left or right you can become mesmerized by some of the core characteristics of this ever growing rave culture amidst; the gloves are out, the orbits are flowing, and the excitement was palpable, all creating a deluge of faces melting from the intricate light show blown up across all attendees. You can experience a very diverse crowd ranging from veteran ravers, to young college kids. A medley of middle to upper twenty year olds and even the uncommon outlier rave babies were all indirectly experiencing a unity that could only be made with an origin of music – and of course bass! To miss out on the ambitious kandi craftsmanship would be a great disservice to yourself. An array of rainbow coated arms and jewelry glistened under the light of the shinning disco ball. 12th Planet set a tone of positivity and excitement as the kandi trading commenced. Dropping a popular mix of fellow artist’s tunes such as Snails and many others, 12th Planet cranks up the energy to a point of straight aggressive belligerence. 12th Planet, being the musically inclined artist he is, took a deeper turn into his set and switched up the BPM to a techno styled sound then flawlessly transitions to some of the more popular dirty trap tracks in the EDM industry. 12th Planet always keeps the fans on their toes and appeals to more than just the traditional masses within his fan base’s favorites while continuing to relate to the opposite end of the spectrum. This distinguished dubstep master has given these loyal bass heads more than anything they could’ve hoped for: an intricate composition displaying the key characteristics of variety and repetition.