Posted at 16:35h in Magazine by Denice 0 Comments
0 Likes
Share 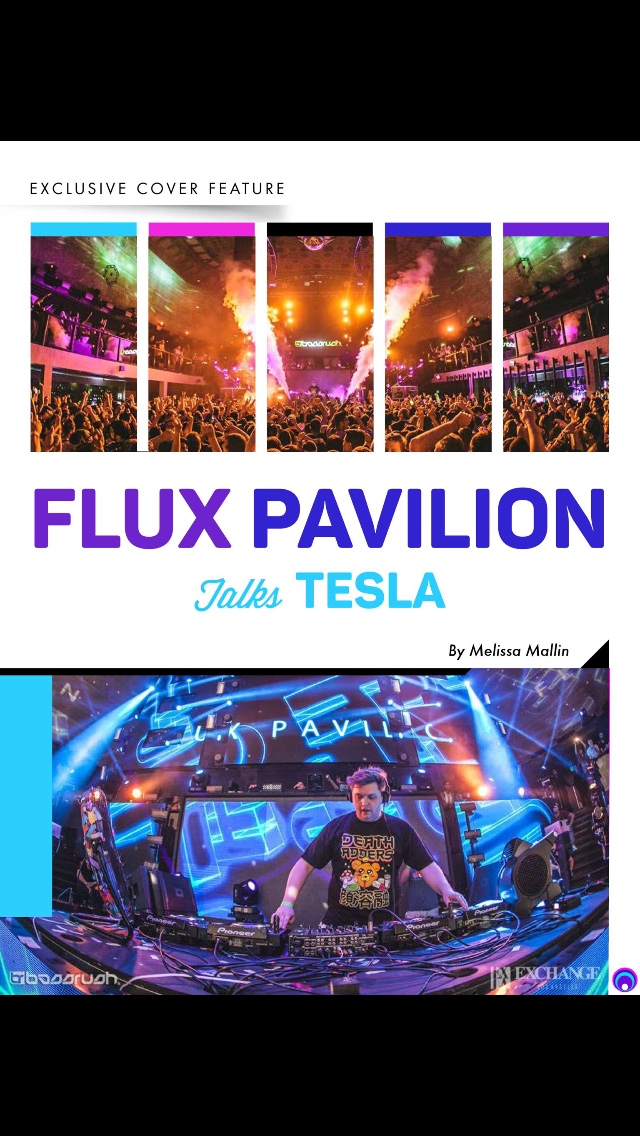 Skrillex may be the Father of Dubstep, but Flux Pavilion is the one who turned the genre into what it is today. Known for his relentless bass and earth shattering drops, Joshua Steele is a legend in Dubstep production. With epic releases like “I Can’t Stop,” “Bass Cannon,” and “Got 2 Know,” its no secret he’s been killing the game since day one.

For nearly a decade, Flux has continued to push the limits of Electronic music by creating spine-tingling and bass-fueled tracks. After years of longing and waiting, the co-founder of Circus Records finally released his new album, Tesla on Sept. 4. Aside from the abrasive Dubstep he’s known for, the album illustrates the evolution of Steele’s sound. It doesn’t quite sound like the old Flux we all know and love, but it still has all the Flux feels, which is exactly what he was going for.

I caught up with UK producer during EDC Orlando to discuss the evolution of his sound, origin and the inspiration behind his new album. Humble, sweet and intuitive, Flux talked about his journey, which started out as an experiment before ultimately, becoming a revolutionary new genre of music.

Hi Josh. As one of the biggest names in Dubstep and EDM, can you first, describe the experience and the journey from where you started to where you are now and what making music means to you?

The process in many ways was that I felt like I didn’t quite fit. Electronic Dance Music was like a world I couldn’t necessarily get involved in and Dubstep was a really inviting expansion of the genre. It doesn’t matter who you are, what you do, what you look like, or where you come from; all that matters is that you’re into this and this is what you do. So, that’s kind of what got me here, having that kind of attitude. It felt like Punk, but it was also kind of polite as well.

Music to me is a form of expression. It’s something that makes you feel good; it’s something you want to listen to and all that classic music stuff. But, in a more personal sense, the deeper part of me believes you can be whoever the f*ck you want, do what the f*ck you want, when the f*ck you want. I think that’s a general thing in life that should be available to everyone. From my understanding, you can’t really have that kind of attitude if you work in banking, for instance; But, any one of those people can quit their jobs and become an artist if they wanted too. It’s that kind of freedom of expression that exist and is a very important thing for humans to have.

Your bio says you can sing, play a variety of instruments and learned how to play the keyboard at the age of six. What other instruments can you play and what made you decide to go into EDM versus playing in a live band or doing something else?

I’m kind of like a jack-of-all-trades, but master of none. I used to sort of just pick up any instrument and be able to play something on it after only a few hours. I think once you have an understanding of music, it’s not hard; It is if you’re trying to be good, but I never really had that. There’s been a few times where I’ve played a show, picked up a guitar and would just try to not f*ck up, but I never tried to be the best, kind of thing. It’s like when I play drums, which is probably the primary instrument, whereas the guitar and saxophone come secondary. When I play the drums, it’s just whatever I feel is good is how I should play the drums. And, when I was growing up, I was always bad at the drums, but it was like ok, I don’t really care.

That was the thing with Dubstep; You didn’t have to be good to do it because it was more about an attitude and a feeling. When you look at Scream’s early productions and Bingo and those guys, they weren’t the best producers in the world, but they were doing something different and it felt like they were doing something that mattered to them, and that’s why I connected with it.

I think even when I’m playing guitar and it’s really sloppy, I’m still confident that I like it. I’m still confident I’m enjoying myself and I’m happy with what I’m playing. For me, I was never in a place where I could technically amaze people, but that never mattered because I’m not doing it for other people. I’m doing this for myself.

Even now, I don’t feel like I’m a good producer. I look at people like Rob Swire, Noisia and Skrillex and listen to their technical production and I’m like, “they are better producers than me,” but I don’t really care. I’m not trying to be better than them; I’m not trying to be better than anyone. I’m just trying to do my own thing, the best I can. So, I’ve never felt and I don’t feel like I’ve gone into EDM and that’s my calling. I feel like I’m just as good at this as I am at anything else. But, being good doesn’t matter. It’s really the taking part that counts. It’s that real cheesy thing where you don’t have to win. How do you win? What’s first prize?

You created Circus Records with longtime friend Doctor P, legendary DJ and Drum and Bass pioneer, DJ Swan-e and Earl Falconer of UB40. Can you tell us how you all got together and why you decided to create your own label versus signing with someone else?

It was kind of under the same thoughts as like, when it comes down to releasing music, you always have to find a label to release it. It came to a point where you’d make something and you think it’s really dope, but then you have to persuade someone that it’s good. Then, they’d be like, “yeah, I think you still need to work on this a bit more, or you still need to fix this,” and stuff like that. I started to find it a bit frustrating because I was doing that for a few years and then it was like, ok; It’s good to get feedback, but what if this person, who owns the label doesn’t have a good idea? What if he tells me to do something that’s wrong and makes the song worse? That’s quite a shitty thing. So, we thought, well if we start our own label, then nobody can tell us whether our stuff is good or not. We just have to believe in it and put ourselves on the line and go, “well, this is what we think is good,” rather than trying to hope someone else’s opinion is right or wrong. We just trust in our own opinion kind of thing. So yeah, that was the idea.

When we started, our biggest tracks like, “I Can’t Stop,” and “Sweet Shop” and stuff, nobody played them. When I would play it, people would walk out of the room. People were really not into it at all. They were like, “this doesn’t sound like everything else,” and we were like, “well, f*ck it; we like it and the people left in the room, they like it.” So, that’s important. As time went on, we just stuck with what we did. Eventually, people started catching on to it and getting into it and because we didn’t try to follow any of the trends and stuff, we were kind of just sitting there waiting for them.