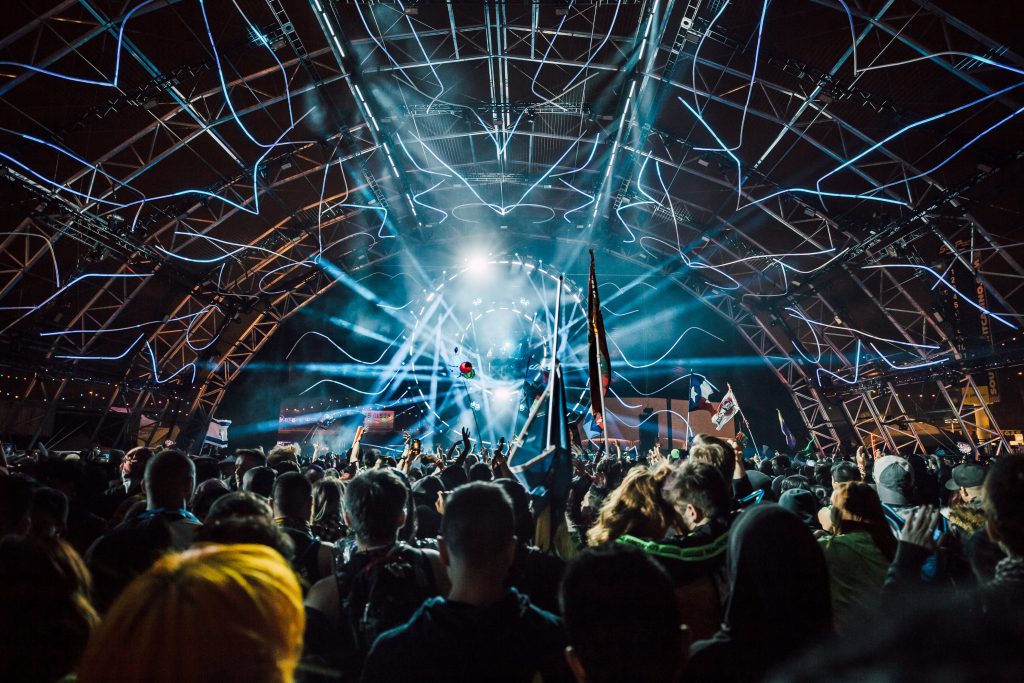 At Electric Daisy Carnival in Las Vegas, I had the opportunity to sit down with Andrew Rayel and chat with him about a few different topics revolving around his Find Your Harmony hosted stage this year.

Is this your first time getting to host a stage at a festival? Can we expect more hosted stages in the future?

I’m super happy and thrilled to partner up with so many acts and the Dreamstate brand. It’s pretty much the biggest trance brand in the USA to host my own stage here at EDC in Las Vegas at the Find Your Harmony stage. This is my first time hosting a stage at a festival. We’re definitely planning to do it even more in the future to grow the Find Your Harmony brand. I’m happy I get to do this for the first time with such a professional team. EDC is the biggest festival in the world, and they helped us a lot to put all this together.

How did you go about picking the artist for this stage?

Well, for me, it was kind of easy to pick out the artists just because in the trance world we’re all friends. We all know each other. Most of them are very close friends of mine, and a lot of the artists are from the same agency as well, so I just picked the music that I love the most, the artists that I enjoy the most, and some of my very closest friends. It wasn’t hard.

Everyone was very happy to join and be part of Find Your Harmony. For the lineup, we got Ruben De Ronde, David Gravell, Space Corps, Andrew Beyer, Cosmic Gate, MaRLo, Mark Sixma, and myself to play sets tonight.

Are you dropping any new tracks we should listen out for? What are they called?

Yeah, I’m gonna be dropping a lot of new tracks. Probably the biggest one that I’m most excited about is my next collaboration with one of the biggest vocalists in the trance genre right now, Haliene. We made a track together which is called, “Take All of Me,” and I haven’t played it anywhere. It’s going to be the first time I’m playing it for people, so I’m super excited about that. She’s such a great voice.

I’ve also done a bunch of really cool remixes. We all know that today is the last episode of Game of Thrones. And I knew that in advance and actually decided to do a remix of the Game of Thrones theme, and I’m gonna be dropping that tonight as well. I also did a really cool cover remake/bootleg of Lady Gaga and the Bradley Cooper’s, “Shallow,” in a very trancy uplifting form, and I’m also very excited to play that.

Besides that, there are so many new tracks from the label. You know there’s tons of great music that’s going to be premiered in my set.

What is the best part as well as the most challenging aspect of running your own label?

The best part is that I get to decide when I when I want to release my tracks and how I want to schedule out the other tracks because most of them I want to premiere on my radio show and then in my live sets so everything is properly organized with a schedule and everything runs from one to another. It goes from here into my in my live set, and then it goes into my radio show, and then we get it released, so we can all plan that out in advance.

The most challenging aspect of running the label is that it’s a lot of work. I’m also helping a lot of the artists on finishing their tracks and that makes me have less time for my own productions. So, it’s just a lot of work and you have to deal with every single artist differently, as everyone has their own preferences. So I’m working with a lot of people who are all completely different who all want different things for each release. There’s no formula to follow. Every single release is a separate case. We want to be nice and treat each artist the way they want to have their releases. So that’s why we’re doing that.

Do you do artist development with each artist as well?

Yeah. I’m actually helping and giving them advice with their music by guiding them to where they should go with their upcoming tracks. I let them know what’s working best now in the live performances among a handful of other things.

What does Find Your Harmony mean to you? How does this fit into the inHarmony Music label logo?

Well, Find Your Harmony, in general, is probably the work of my life. It’s the biggest concept that I could have come up with that helps people to listen to good music, have a good vibe, create a good vibe, and it helps people in general with their lives. I get so many stories from fans who tell me they had this trouble or I had this bad day, or I had this thing in my life and your show and your music helps me get through all these bad situations and through all this hell through all these diseases and everything. I’ve got so many stories about that, so it’s therapy. It’s a therapy for people in a way. I’m super happy that people see it this way, and this is what it actually means to me.

With the logo, we took a very simple approach. You know, if you think about harmony, the first thing that comes up into your mind is in yin and yang symbol. We took that as a basic idea and just made the logo around that. It wasn’t super creative or out of this world. It’s just basic. Basically, it’s the idea of two parts that come together and making this perfect figure that’s in harmony.

Well, obviously, it’s hard to compare Moldova with the United States just because it’s a way smaller country with way fewer people and economy and political situation is way different. There are so many states in the United States, and every state has its own scene with hundreds of festivals with all the biggest names in the world. It’s a well-developed industry in the United States. In Moldova, things are not that way, but my team and I are doing our best to do shows there. My personal show is there at least once a year.

We also bring other DJs. A few years ago, we brought David Guetta, Armin van Buuren, and Above & Beyond a few times. It’s mostly acts that we like, think will work, and sell tickets in the country. It’s very hard to get it to the next level because it’s all connected with many things including politics and most of the times people just don’t have enough money to care about shows to go buy a ticket and come.

What is one song you will always play in your sets and why this song?

It’s “Dark Warrior” because I’ve been playing it since I made it, and even though it’s already pretty old, in a way, I’m playing like new versions of it all the time but it’s still “Dark Warrior” and still recognizable. It’s just one of those massive tracks that work, and you don’t want to let go of a track that works so well with the crowd. I’ll probably still play it in 10 years.

It’s very very simple but has a very recognizable melody. And we already have this move of waving hands with the track, which is very connective even if I don’t do it. People start doing it. So, I do it with them. It’s just a dance floor destroyer.

Who are some artists whose tracks you’ve featured on inHarmony that we should listen to?

I’ve got many, many known artists but also new talent that people haven’t heard about but they’re going to very soon. I have both Mark Sixma and David Gravell who are both playing today here as well. Other acts that I really enjoy and I see a bright future for are Corti Organ from Europe, Chuckiess & Whackboi from Malaysia, and Husman, a Dutch guy who’s very talented. I think I have like three or four tracks in my set that I play by him. Bogdan Vix & KeyPlayer are Romanian guys that are always making beautiful vocal tracks. I mean the list just goes on and it includes a lot of great artists. I personally don’t have a problem with finding new great music. They always send me so much stuff. I’m like, “Guy, when am I gonna release all of it?”

Is it hard to pick what songs you’re going to release?

It is getting harder and harder because you know they send me more and more, and space does not extend itself. There’s only a certain amount of weeks per year, and even though we’re releasing a track a week, that’s already a lot. Yeah, like you can’t really properly pay attention to every release, and we can do more than that, and it’s getting harder and harder. Yeah.

Do you think you would create another offshoot label?

I don’t know. It feels like I’ll have to at some point. Yeah.

For more on Andrew Rayel, check out his website and social media pages here.

What was your favorite track from Andrew Rayel’s set at EDC Las Vegas? Swipe up to comment below and let me know!