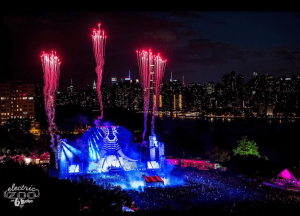 This past weekend, September 1-3, was Electric Zoo in New York’s 6th Boro at Randall’s Island park. Electric Zoo is an international festival occurring in Mexico, Brasil, and Shanghai. I went to New York for Saturday’s festival. I wish I had more time to spend, but life is real and work pays the bills. So I drove to New York from Baltimore, for a day trip. It’s only a 3-4 hour drive but the round trip in tolls cost me approximately $60.

I’m not surprised, but the traffic and parking sucked. When entering Randall’s island by vehicle over the bridge, I noticed herds of people migrating from, what I later learned to be general parking, a 30-minute walk, to the entrance via the pedestrian overpass. Once on the island, it was discovered that all of the nearby lots were reserved for staff. Hint to all the people walking. Luckily, we found an empty lot used by a rehabilitation center nearby. We parked there at our own risk with hopes of not being towed. From that location, the walk to the entrance was only 10 minutes.

I finally arrived at the gate by 4 pm. I thought that was good timing since the festival began at 2 pm. Nope! The lines were long as hell. First, will call, then the line for entry and bag check. It helped that the staff were professional and organized, so the situation was not stressful. I finally made it inside around 5 pm, according to the time stamp of my pic with the oh so cute orange panda. 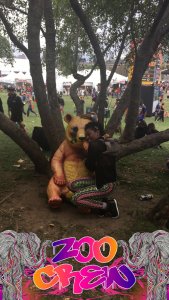 I had no game plan and just started wandering to the different stages. In comparison to other festivals, it was convenient that the lineup schedule was posted at each stage. Therefore, an unorganized soul like me would always know who was currently playing. My first stop was the main stage where Illenium was playing. Honestly, I was enamored by the gigantic elephant head hovering over the stage, shining beams of lights into the crowd. It reminded of the owl at EDC’s main stage. I met a raver wearing a mask that was an impressive rendition of the electric zoo elephant. Of course, that required a selfie. 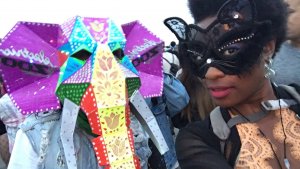 Unfortunately, the rain arrived as predicted. Ugh! To solve that problem, I finished out the night under the tented stage. Which to no surprise, it was everyone’s back up plan. I was fortunate to have landed the perfect spot right in the middle. Perfect timing too because that stage’s featured DJs included Ghastly and Slander. It closed the night with Excision, whom I also had after party tickets to see later that night.

For those who have the blues after an outdoor festival ends, the after parties are a great supplement. For $65, after fees, I went to an E Zoo official after party featuring Excision. Party was lit y’all. The club was a small intimate venue surrounded by huge speakers. Excision’s bass made everything rumble. You could feel the music vibrate from the floor to your heart.

Overall, E Zoo panned out to be a great time despite the rainy conditions. In 2018, it’s their 10th anniversary. Definitely a good reason to make my way back to big apple…