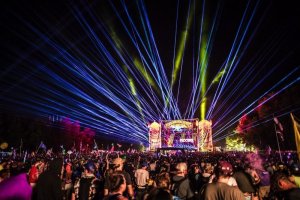 Rothbury, Michigan’s 2017 Electric Forest Festival went out with a bang yet again. Showcasing some of the most iconic DJs in the music industry and hosting more than 40 thousand people in the magical forest makes for an unforgettable experience.

However, this year’s Forest definitely takes the cake for making some of the craziest headlines. From a mysterious severed finger to a hilarious celebrity run-in, the seventh annual Electric Forest Festival gained a ton of publicity and I’m here to give you the run down.

As phase one of the festival came to an end and the crowds cleared out, a human severed finger was found in the grass of the event grounds. Soon after, a nasty photo went viral after being posted to the Electric Forest Facebook page, and from the looks of it, that finger is definitely real.

Police were quick to investigate the situation but not to worry; the mysterious finger ended up being a hoax. Michigan State Police confirmed to local news that the “finger” pictured in the image is just a “very real looking fake finger.”

The genius behind the prank is still unknown but I’m sure whoever it is, they’re having one hell of a laugh.

Ray Graves, 19-year-old festival-goer from Alabama, attended the first weekend of Electric Forest and was one of the lucky individuals to receive the gruesome photo of the finger.

“I actually got sent that picture on the last day of the festival by one of the paramedics working the fest,” Graves said. “Pretty sure he knew it was fake, just trying to scare the shit out of me.”

Check it out for yourself but try not to gag.

WARNING: The following photo may be graphic to some viewers. 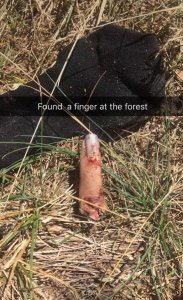 It’s no secret that the legendary comedy, Superbad, will forever go down in history, but there’s one guy at Electric Forest who gave the movie its ultimate tribute.

This dude carried around a homemade McLovin totem pole; the infamous fake ID from the movie. However, little did he know that Chris Mintz-Plasse, the actor who plays McLovin, was at the festival as well. How ironic is that?

Mintz-Plasse made the effort to track down the totem man and made for an unforgettable moment that’s going viral.

Electric Forest Police officers switched things up by adding some colorful accessories to their uniforms. Surprising the festival-goers at the entrance gates and around the event grounds, officers were seen trading Kandi bracelets with attendees.

A safety message was attached to each bracelet with a friendly reminder to stay hydrated and have a good time. The officers were allegedly very supportive of the rave culture and the crowd reacted extremely positive. 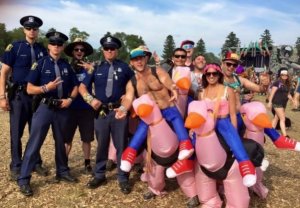 By The Electronic Current

Along with several entertaining headlines, Electric Forest ended strong with thousands of satisfied guests and set the record for the largest crowd they’ve ever hosted before. Be sure to keep an eye out for next year’s tickets, you definitely don’t want to miss this.