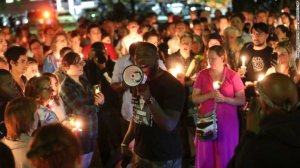 August 12th was an extremely disheartening day for America. Several white nationalist groups gathered in Charlottesville, Virginia to protest the removal of a confederate leader General Lee statue. The destructive groups gathered with torches around the statue, with chanting “white lives matter” and racial slurs.

Aside from the right-wing, several protesters from the left protested the protest. This caused an outrage from the right, and prompted a supremacist truck driver to purposely crash into those who were speaking against hate. The crash killed one woman, and injured 19 others. Though the Governer of Virgia has spoken out againt the hate the alt-right has caused, the president has yet to address the groups that have specifically been violent.

Some DJ’s who have spoken up about the events are Marshmello, Slushii,ROZES,and Steve Aoki. 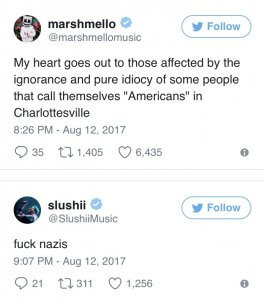 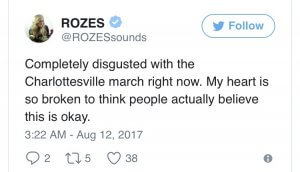 As we know, the EDM community’s core values of P(eace)L(ove)U(nity)R(espect) do not stand for this nor condone what has happened this past weekend. Several DJ’s have outright spoken against the hate projected this weekend, and always make sure the community and events are a safe space for all people of different demographics and ethnicities. 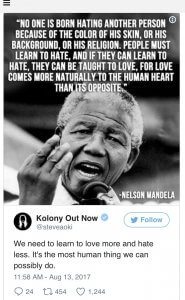 What are some ways we can strenghten our safe spaces? Let us know in the comments!