Posted at 15:34h in Magazine by Denice 0 Comments
0 Likes
Share 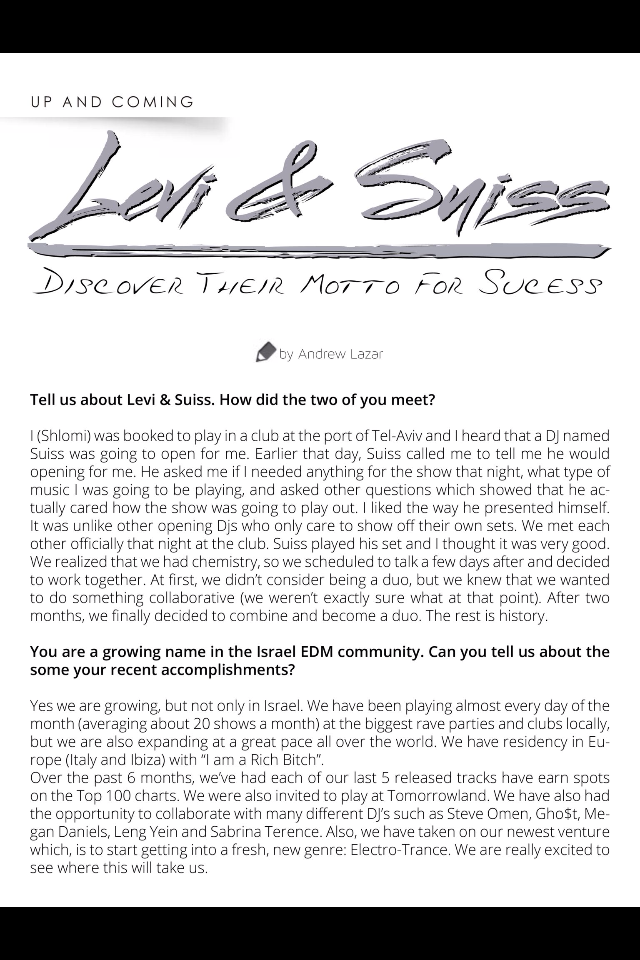 Tell us about Levi & Suiss. How did the two of you meet?

I (Shlomi) was booked to play in a club at the port of Tel-Aviv and I heard that a DJ named Suiss was going to open for me. Earlier that day, Suiss called me to tell me he would opening for me. He asked me if I needed anything for the show that night, what type of music I was going to be playing, and asked other questions which showed that he actually cared how the show was going to play out. I liked the way he presented himself. It was unlike other opening Djs who only care to show off their own sets. We met each other officially that night at the club. Suiss played his set and I thought it was very good. We realized that we had chemistry, so we scheduled to talk a few days after and decided to work together. At first, we didn’t consider being a duo, but we knew that we wanted to do something collaborative (we weren’t exactly sure what at that point). After two months, we finally decided to combine and become a duo. The rest is history.

You are a growing name in the Israel EDM community. Can you tell us about the some your recent accomplishments?

Yes we are growing, but not only in Israel. We have been playing almost every day of the month (averaging about 20 shows a month) at the biggest rave parties and clubs locally, but we are also expanding at a great pace all over the world. We have residency in Europe (Italy and Ibiza) with “I am a Rich Bitch”.
Over the past 6 months, we’ve had each of our last 5 released tracks have earn spots on the Top 100 charts. We were also invited to play at Tomorrowland. We have also had the opportunity to collaborate with many different DJ’s such as Steve Omen, Gho$t, Megan Daniels, Leng Yein and Sabrina Terence. Also, we have taken on our newest venture which, is to start getting into a fresh, new genre: Electro-Trance. We are really excited to see where this will take us.