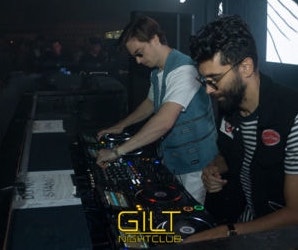 Disco Donnie Presents is known for bringing in heavy hitters such as Yellow Claw to not only the Orlando area but to 100 other markets around the world. Markets that Disco Donnie Presents has touched include Mexico, Canada, and Latin America. DDP puts on a remarkable show, and they have organized over 10,000 of these events. They are seasoned vets when it comes to hosting events.

The founder of DDP, James “Disco Donnie” Estopinal Jr., has pushed to be recognized globally. The organization is viewed as one of the top dance music promotion companies. They are responsible for organizing and promoting club events across the U.S. ranging from Portland, Philadelphia, Houston, Tampa, New Orleans, Dallas, and St. Louis. Disco Donnie Presents has also backed some major festivals such as Ultimate Music Experience, Sunset Music Festival, and Sun City Music Festival.

Yellow Claw is a group consisting of two DJs from Amsterdam. They are known for mixing a range of sounds that pull from genres such as trap, hip-hop, dubstep, big room house, hardstyle, and moombahton. Last year, the group could be found on the main stage at Tomorrowland or performing at countless other festivals around the country.

They thrive off the live performance. With energy turned to the max, they will amp up a crowd easily. All it takes is a leap atop a speaker and the mic in hand. They are never just behind the DJ table. Spinning songs with provocative lyrics and set to a dope beat is their MO. You will not leave a Yellow Claw set disappointed.

Being at Gilt Nightclub with Yellow Claw was amazing. Just as they put on a banging show at the festivals they play, they put on an equally lively show in the intimate setting of the club. 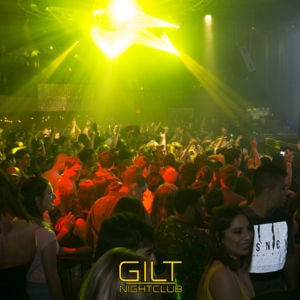 Find Us at the Club

When you arrive, a crowd of folks anxiously await entry to Gilt Nightclub to experience a DDP party. The staff is friendly and welcoming, unlike some cities that pride themselves on making guests feel unworthy of entry. A feeling of fun and modern decor captures your eye once you step inside.

Gilt’s floor plan allowed for everyone to feel close to the stage. The VIP area, just seated off to the right of the stage, felt especially close to Yellow Claw. Back by the bar was a pocket of dance space, but at the expense of a full view—the upper-level balcony blocked it. That’s probably why there was space to drink and shuffle.

If dancing is not your thing, being amongst the people is just as satisfying. Grooving with the wonderful people made it easy to forget that space was tight. Everyone showed mutual respect and love when passing through the crowd. The club enforced a dressed code for men, which made the vibe less festival-like, but the women showed out.

Despite the male dress code, we had a visit from a laser-shooting, eight-foot-towering, dancing robot. Midway through the show, you could spot a tall superbly-dressed being, glowing from the middle of the dance floor. His presence immediately got the club hyped. 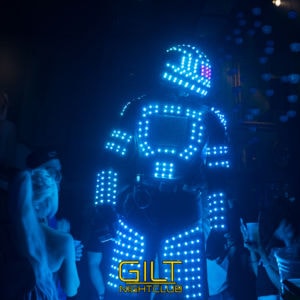 Are you planning a trip to Orlando, Florida? Click here to discover a Disco Donnie Presents party to attend in Orlando or a city near you!