23 May Celebrating Our Freedom At Dance 4 Liberation Festival 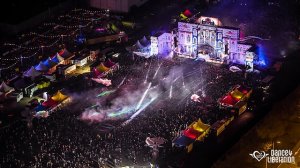 Liberation Day, also known as Bevrijdingsdag, is a holiday that is set to honor the end of the Nazi Occupation in The Netherlands. It was an evening of somber remembrance for the great sacrifices made during the second world war. It begins on the 4th of May every year and there is a change of tune on the 5th to really celebrate the freedoms we are so fortunate to have today.

I took the train from Amsterdam to Zwolle to attend Dance 4 Liberation and the nine platform station could barely handle the people coming in for the 20 DJ lineup. 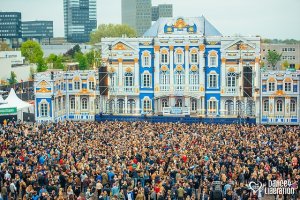 The all-ages festival put on by High Energy Events had two stages placed back to back in the industrial part of the city. There was a Hardstyle stage that looked like some sort of futuristic ground zero while the House/Electro stage looked like the image of the King’s Palace. Each one was simple but quality stage designs that were very well organized to utilize the space.

Food and drinks were purchased with Munt Coins. They are always a bit of a hassle to purchase but keep the drink lines short. I enjoyed every reason to grab a nice cold beer. There was typical Dutch food like bitterballen and fries with mayo. I also saw a stand with fresh fruit for smoothies and a very popular festival favorite here called Vietnamese loempias.

The first two acts at the Palace Stage were Randy Van Velde and Easy & Young. Next up was one of Tiesto’s young talents named Mike Williams. One of the tracked I recognized him spin was by Tiësto & Mike Williams & Justin Mylo – Groovy George x I Want You.

After Mike Williams was the duo Lucas & Steve who brought their ever fun vibes to the stage to celebrate Bevrijdingsdag. One of my favorite tracked is played was by Sam Feldt x Lucas & Steve feat. Wulf – Summer On You and their 2016 track Love On My Mind.

Next on the lineup was heavy hitting big sounds from a Revealed Recordings household name Kill The Buzz. They played their tracks Break The House Down and All The Way Down which really go the crowd going.

The duo that took over the decks next were none other than the legends Chocolate Puma playing tracks Give it Up and Take The Ride. Mightyfools were next on the roster cranking up the crowd as would be expected by any Barong Family Member.

As the sky got a little darker from the sun setting and the lights could finally shine a little brighter, Thomas Newson took to the stage spinning his tracks Flute and Shakedown.

The artist behind the AMF 2016 anthem, Jay Hardway, was the Pre-closer with Headhunterz closing out the party on the House Stage at midnight. 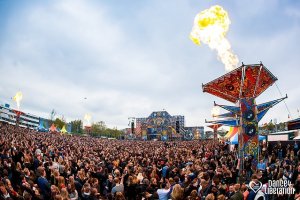 I didn’t spend too much time at the Hardstyle stage, but I must admit Wildstylez and the MC Villian really changed my mind on the genre. I’ve never felt a real connection to the Hardstyle sound, but the vibes were just too good. With incredible energy and still tons of melody, it was impossible not to have an amazing time. JNXD, EMJAY, and Audiotricz got the party started on the Hardstyle stage. Party veterans Wildstylez, Brennan Heart and Code Black lead into the evening. #1 Hardstyle DJ in the World Coone was to follow. The two closing acts were Digital Punk and Frequencerz.

Dance4Liberation was a success, and I would definitely be interested in attending next year. I also want to check out some other festivals put on by High Energy Events.