Posted at 13:26h in Festival by Denice 0 Comments
0 Likes
Share 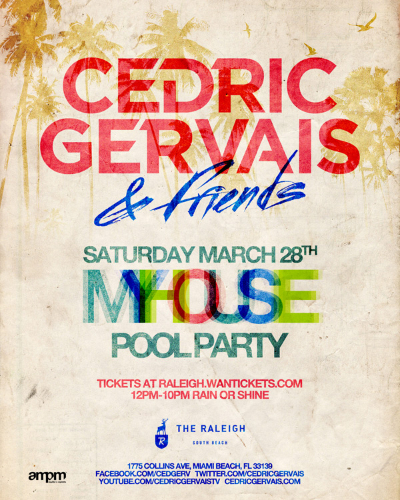 Cedric Gervais & Friends announced that they will be playing the MY HOUSE pool party in Miami during Winter Music Conference 2015. The event will take place on Saturday, March 28 at The Raleigh Hotel on South Beach and will feature the best that house music has to offer. The full line-up announcement will come out later in the coming weeks.

The Grammy award winning DJ and producer recently launched his new podcast MY HOUSE, with episode 001 out now. For the French born, Miami residing artist, MY HOUSE demonstrates his roots as a house DJ and his edge as an electronic tastemaker with a magic touch. With a new episode hitting every month, MY HOUSE will consistently deliver his signature high-energy sound, with a distinctive thread of hard-hitting house running through it.

Click here to purchase tickets for the MY HOUSE Pool Party.